Does Hillary Clinton Take Us for Idiots? 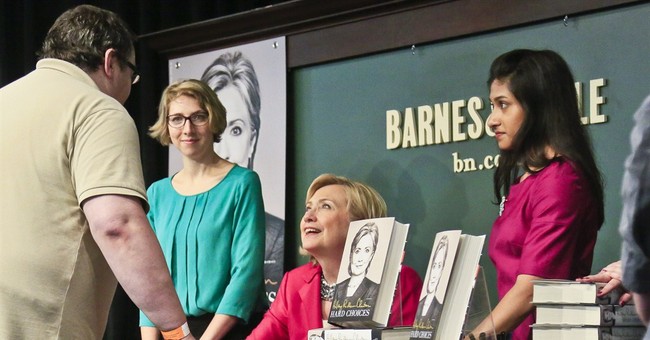 Hillary Clinton gets bashed frequently from “our side of the aisle.” But among the many, varied and colorful descriptions applied by her political enemies to our former First Lady and former Secretary of State you don’t often find “dumb.”

Apparently she reserves that one for us. As if we need more proof of her disdain for our sense than the Benghazi cover-up now come the “revelations” in her book Hard Choices. Turns out, the former “Smartest Woman in the World” somehow found her husband and herself “dead broke” upon leaving the White House in 2000.

So they promptly bought a house worth $2.85 million.

Another revelation was her prodding of President Obama to lift what’s left of the so-called Cuba embargo. “The embargo is Castro’s best friend,” Clinton chanted to an extremely friendly audience at the Council on Foreign Relations last week while citing and promoting her book Hard Choices.

I write “friendly” because on top of David Rockefeller’s own affection for Fidel Castro, his CFR also houses as its “Senior Fellow and Director of Latin America Studies” Julia Sweig, probably the Castro regime’s top U.S. “agent of influence” as revealed by the Defense Intelligence Agency’s top Cuba spycatcher, Christopher Simmons.

Normally such agents are very discreet about their Castro-regime connection. Instead Ms Sweig blew her cover into a billion tiny pieces when in the very acknowledgements to her book Inside the Cuban Revolution, she thanks—“for their warmth, for their friendship, for opening Cuban doors and championing her project :” Elsa Montero Jose Gomez Abad, Ramon Sanchez Parodi, Jose Antonio Arbesu, Fernando Miguel Garcia, Hugo Ernesto Yedra and Josefina Vidal. Every one of these Cubans has been identified by retired Lieut. Col. Chris Simmons as KGB-trained Cuban agents.

In 1962 two of these Cuban spies (Elsa Montero, Jose Gomez Abad) were planning a terror bombing in Manhattan would have easily dwarfed the 9-11 death toll. Most of the rest were expelled from U.S. shores after Lieut. Col. Simmons himself outed them.

Despite the gaffe, Sweig’s prime position from which to influence U.S. policy (the CFR!) probably forced her Cuban case-officers to wince, grit their teeth-- but ultimately forgive and “move-on.” I haven’t checked Guinness, but effusively thanking the warm support of 7 different spies from a Terror-Sponsoring enemy nation in your book’s acknowledgements-- three of whom were expelled from the U.S. for terrorism and/or espionage-- must be some kind of record, at least for someone outside a maximum-security federal prison.

Another indiscretion: When the CFR’s Julia Sweig visited Cuba in 2010, accompanied by The Atlantic’s Jeffrey Goldberg, something caught Goldberg’s eye:

“We shook hands,” Goldberg writes about the meeting with Fidel Castro. “Then he [Fidel Castro] greeted Julia warmly. They [Fidel Castro and the CFR’s Sweig] have known each other for more than twenty years.”

At any rate, parroting this KGB-mentored meme (“the embargo only hurts the Cuban people, Castro secretly likes it so he can use as an excuse blah…blah”) is hardly unique to our former Secretary of State. This transparent idiocy ranks as the favorite talking point of Castro’s agents, on the payroll and off. Naturally it’s a favorite of the CFR’s Julia Sweig herself. Sadly, it’s widely believed by the superficially-informed on Cuban matters.

I say transparent referring to the meme’s obvious nonsensicality when heard or read by people who actually bother looking past the bumper-sticker and T-shirt slogans on the Cuba “embargo” and actually study the issue. Such folks—let’s face it-- aren’t many. Indeed the Cuba embargo T-shirt slogans have much in common with the Cuban regime’s T-shirt icon himself, Che Guevara. Both appear superficially “cool,” to the willfully ignorant and to imbeciles. Both began as KGB-mentored disinformation campaigns. And both fables explode on actual contact with actual facts.

First off, if Castro “secretly favors the embargo,” then why did every one of his secret agents campaign secretly and obsessively against the embargo while working as secret agents? Castro managed the deepest and most damaging penetration of the U.S. Department of Defense in recent U.S. history. The spy’s name is Ana Belen Montes, known as "Castro’s Queen Jewel" in the intelligence community. In 2002 she was convicted of the same crimes as Ethel and Julius Rosenberg and today she serves a 25-year sentence in Federal prison. Only a plea bargain spared her from sizzling in the electric chair like the Rosenberg’s.

Prior to her visit from the FBI and handcuffing, Ana Belen Montes worked tirelessly to influence U.S. foreign policy against the embargo. The same holds for more recently arrested, convicted and incarcerated Cuban spies Carlos and Elsa Alvarez and Kendall and Gwendolyn Myers. All of these worked tirelessly to influence U.S. policy against the "embargo"-- while working as secret agents.

It’s one thing for some talking heads with their typically overworked and harried research staff to remain ignorant of these vital matters. But shouldn’t a former U.S. Secretary of State be familiar with matters so vital to U.S. security?

Oh! And while we’re on the topic! Will some you libertarians out there kindly inform the (anti-embargo) CATO Institute that a good friend of most of their work (me) has a suggestion? CATO’s anti-embargo page showcases a Defense Intelligence Agency estimate about Cuba “no longer being a threat to U.S. interests.” Well, this quote is lifted straight from a policy paper authored by none other than Ana Belen Montes.

So could you please inform CATO that there are probably more effective lobbying techniques than quoting the policy recommendations of an enemy spy from a terror-sponsoring nation who was convicted of the same crimes as Ethel and Julius Rosenberg. Because I’d really hate to think CATO regards the American people in the same manner as does Hillary Clinton. Thank you.