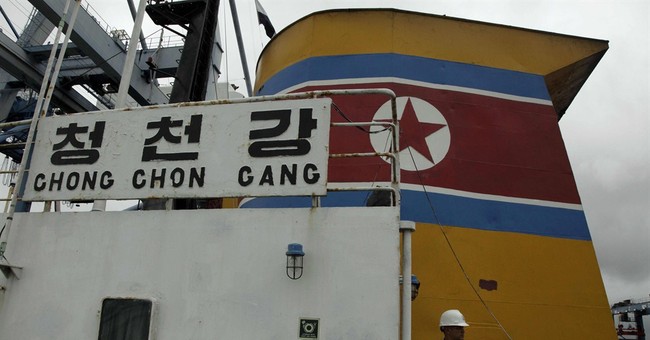 Back in July a North Korean ship trying to sneak military contraband through the Panama Canal after leaving Havana was stopped on a tip by Panamanian authorities.

Well, wha-da-ya know?! The ship, named the Chon-Chon Gang, was found to be crammed with missiles and mucho military contraband from terror-sponsoring Cuba. Nuke-rattling North Korea has been under a UN arms embargo since 2006, by the way.

At first, Cuban terror-sponsoring dictator Raul Castro tried threatening the Panamanian authorities behind the scenes to keep the issue mum, or at least parrot their version of the scam. But Panamanian President Ricardo Martinelli scoffed at the blatant blackmail and made the truth known.

"The 508-foot Chong Chon Gang carried 240 tons of obsolete defensive weapons were to have been repaired in North Korea and returned to Cuba as part of a commercial deal.” (July 17, 2013)

"It's not about Havana trying to circumvent an arms embargo. It's about: how about we refurbish our old weapons" (Julia Sweig (7/28/2013.)

Admittedly, the issue was in doubt at the time. No investigation had been conducted. So who knew the truth? Fine. So why did an outfit like The Council on Foreign Relations, that bills itself as: “an independent, nonpartisan membership organization, think tank” not wait for an independent non-partisan investigation to determine the truth? Why did the Council on Foreign Relations instantly start parroting the version of this issue as concocted by the propaganda ministry of a regime modeled on Stalin’s?

A United Nations panel just completed its investigation into the Chon-Chon Gang issue, among its findings: “The incident involving the Chong Chon Gang revealed a comprehensive, planned strategy to conceal the existence and nature of the cargo.’ The weapons, needless to add, were not “obsolete” or meant to be “refurbished.”

When the CFR’s Julia Sweig visited Cuba in 2010, accompanied by The Atlantic’s Jeffrey Goldberg, something caught Goldberg’s eye:

“We shook hands,” Goldberg writes about the meeting with Fidel Castro. “Then he (Castro) greeted Julia warmly. They (Castro and Sweig) have known each other for more than twenty years.”

In 25 years as a U.S. Military Counterintelligence officer, Lieut. Col. Simmons helped end the operations of 80 enemy agents, some are today behind bars. One of these had managed the deepest penetration of the U.S. Department of Defense in U.S. history. The spy’s name is Ana Montes, known as “Castro’s Queen Jewel” in the intelligence community. “Montes passed some of our most sensitive information about Cuba back to Havana,” revealed then-Undersecretary for International Security John Bolton.

Today she serves a 25-year sentence in Federal prison. She was convicted of “Conspiracy to Commit Espionage,” the same charge against Ethel and Julius Rosenberg carrying the same potential death sentence for what is widely considered the most damaging espionage case since the “end” of the Cold War. Two years later, in 2003, Chris Simmons helped root out 14 Cuban spies who were promptly booted from the U.S.

The Council on Foreign Relations’ Julia Sweig holds preeminence in one field. No “scholar” in modern American history thanks the “warm friendship” and “support” of six different communist spies and terrorists in the acknowledgments of their book, three of whom were expelled from the U.S. for terrorism and/or espionage, two for a bombing plot whose death toll would have dwarfed 9/11. Some background:

On Nov. 17, 1962, the FBI cracked a plot by Cuban agents that targeted Macy’s, Gimbel’s, Bloomingdale’s and Manhattan’s Grand Central Terminal with a dozen incendiary devices and 500 kilos of TNT. The massive attack was set for the following week, the day after Thanksgiving. Macy’s get’s 50,000 shoppers that one day. Had those detonators gone off, 9/11’s death toll would have almost certainly taken second.

Here are pictures of some of the Cuban terrorists upon arrest. Note the names: Elsa Montero and Jose Gomez Abad.

Now here’s an excerpt from the acknowledgements in Julia Sweig’s book Inside the Cuban Revolution, written in collaboration with the Castro-regime:

In addition to these two KGB-trained terrorists, the CFR’s Julia Sweig thanks the “warm friendship and championship of” of Ramon Sanchez Parodi, Jose Antonio Arbesu, Fernando Miguel Garcia, Hugo Ernesto Yedra and Josefina Vidal for their “warmth, their friendship and their kindness in opening Cuban doors.”

All the above have been identified by Lieut. Col Chris Simmons as veteran officers in Castro’s KGB-trained intelligence services.