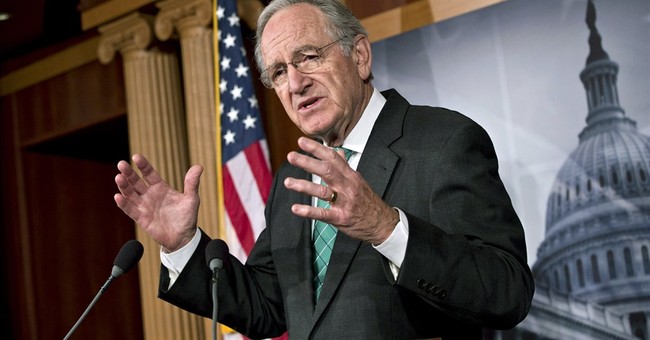 If Justin Beiber had returned from Cuba smitten with its healthcare and calling it “awesome!” most Americans would understand. But Iowa Senator and Obamacare champion Tom Harkin serves as chair of the Senate Health, Education, Labor and Pensions Committee. He just returned from an official tour of Stalinist Cuba hailing its healthcare as “quite remarkable.”

“Cuba’s a poor country,” he marveled. “But they have a lower child mortality rate than us….their public health system is quite remarkable.”

What Senator Harkin actually believes to be true or “quite remarkable” might be (implicitly) worthy of emulation. If so, this would affect the lives of millions of Americans. After all, Senator Harkin is still a few months away from retirement and still banging the drums deafeningly for Obamacare from his chairman’s seat.

It’s an old story with this Senator, actually. In April 1985 while president Reagan sought to aid Nicaragua’s desperate anti-communist guerrillas, freshman Senators Tom Harkin and John Kerry visited Nicaragua, met with the Sandinista (communist) leaders and returned smitten with their dedication to democracy and their enmity towards the Soviets. President Reagan’s obsession with Central American communism and his aid to the Contras was a manifestation of simple “Mc McCarthyism,” sneered the freshman Democratic Senators. The proof was in a “peace-proposal” signed by Sandinista leader and Castro-protégé Daniel Ortega that Kerry and Harkin “held in their hands” (Neville Chamberlain, anyone?) and read convincingly to Congress. Its purpose was to kill President Reagan’s Contra-aid bill.

It worked like a charm. The U.S. Congress swallowed the Communist scam hook, line and sinker and killed the President’s bill. Then exactly three days later a snickering Daniel Ortega was in Moscow, flouting his Soviet ties for all the world to see. The Castro-protégé returned to Managua with a $200 million Soviet aid package, along with a bigger pledge of arms and Cuban advisors to crush the Contras.

So Congress, rotten egg dripping slowly off their face, reversed itself and finally approved Reagan's Contra aid. Harkin and Kerry ultimately failed—but hey, it’s the thought that counts. They did go the extra mile attempting to aid and comfort communists. The original Sandinista national anthem, by the way, includes the line, “We fight the Yankees –the enemy of humanity,” lifted straight from a speech by Che Guevara. It’s nice to know such an outfit charmed the socks off the current U.S. Secretary of State.

Senator Harkin’s official Cuban guides last week-- forgive me for reminding some readers (and perhaps even Senator Harkin and his staff!)--were apparatchiks of a regime modeled almost perfectly on Stalin’s. Most of the Soviet KGB and GRU agents and advisors who flooded Cuba from 1959-62, had actually worked for Stalin. Raul Castro had a KGB handler as early as 1954. “The solution to the world’s problem lie behind the Iron Curtain,” proclaimed the regime’s co-founder Che Guevara, who often signed his correspondence as “Stalin II.”

In fairness, Senator Harkin follows in the footsteps of a long procession of (hopefully!) dupes. But in contrast, there finally came a day when most people recognized that official tours of Stalinist Russia were pure scams. The term “Potemkin Tours” even came into common usage (even among liberals) to describe them.

Alas, such a forehead-slapping, V-8 commercial-type “revelation” about official tours of Stalinist Cuba doesn’t occur to most people, for some reason.

According to The National Journal Senator Harkin also marveled at “the country's (Cuba’s) success in reducing smoking among citizens through public health campaigns."

And it’s not only for smoking. This “reduction” also applies to eating, as in items like milk, beef and bread. In fact as fully-documented in an eye-opening new book-- along with infectious diseases that had been virtually eradicated in pre-Castro Cuba (Dengue-Fever, Cholera) -- nutritional diseases are also rampant nowadays in the Castro family fiefdom. Marzo Fernandez, an economist who until defecting in 1996, served as Secretary General of Castro’s Ministry of Nutrition could help shatter many of Senator Harkin’s illusions.

“The average height of Cubans has decreased by 8 centimeters in the past 25 years,” he’s quoted in the eye-opening new book. “For the first time in Cuban history, thousands of macrocepahlic children (abnormally large heads in proportion to their bodies) due to protein (primarily milk) deficiencies have been found in the eastern provinces.”

Now regarding that vaunted Cuban infant-mortality rate, parroted by Harkin (among many others) some clarifications:

In 1958 (the year prior to the glorious revolution) Cuba ranked 13th from the top, worldwide with the lowest infant-mortality rate. This meant that robustly capitalist pre-Castro Cuba had the 13th lowest infant-mortality rate in the world. This put her not only at the top in Latin America but atop most of Western Europe, ahead of France, Belgium, West Germany, Israel, Japan, Austria, Italy, Spain, and Portugal. Today all of these countries leave Communist Cuba in the dust, with much lower infant mortality rates.

And even plummeting from 13th (capitalist) to 47th (communist), Cuba's "quite remarkable” infant mortality rate is kept artificially low by Communist chicanery with statistics and by a truly appalling abortion rate of 0.71 abortions per live birth. This is the hemisphere's highest, by far. Any Cuban pregnancy that even hints at trouble gets "terminated."

In April 2001, Dr. Juan Felipe García, MD, of Jacksonville, Fla., interviewed several recent doctor defectors from Cuba. Based on what he heard, he reported the following:

"Cuban pediatricians constantly falsify figures for the regime” reveals Dr Garcia. “If an infant dies during its first year, the doctors often report he was older. Otherwise, such lapses could cost him severe penalties and his job. The official Cuban infant-mortality figure is a farce. "

The late George Carlin’s “Hippy-Dippy Weatherman” had a hilarious skit: “The radar is picking up a line of thundershowers,” he says points to the map…”but it’s also picking up a squadron of Russian ICBMs... so I wouldn't sweat the thundershowers.”

In brief, don’t sweat the small stuff. Perhaps that applies here? To wit: if our very Secretary of State allowed snickering communists to play him like a fiddle, why sweat the same fiddle-playing of a middling and soon-retiring Senate Committee chairman?