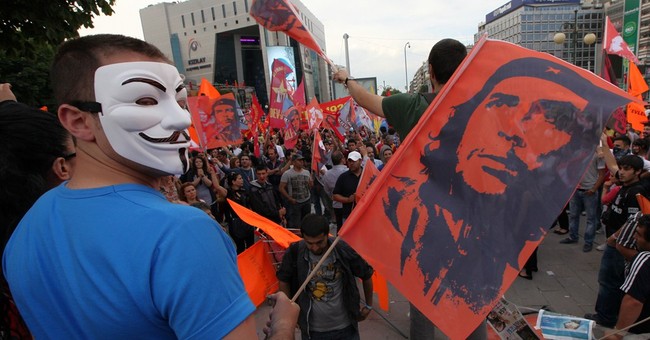 By New York standards the city’s (probable) next mayor Bill De Blasio wouldn’t merit a backstage pass at a Castro concert. The Stalinist dictator’s fan base in the city he craved to incinerate is much too vast and passionate to allow room in the long queue for pictures and autographs to any but the genuinely smitten, who literally swarm in New York City.

“I have a huge critique of the current government there (in Cuba) because it’s undemocratic,” snapped de Blasio to a Cuban–American radio interviewer last week. “It doesn’t allow freedom of the press, and I think there’s a huge number of problems. I also think it’s well known that there’s some good things that happened — for example, in health care.”

“What a sniveling chump!” Manhattan’s elite must be snorting at this milktoast of a Castro-fan. Indeed, when it comes to Castro-mania, de Blasio hardly does justice to New York’s Best and Brightest.

“The Toast of Manhattan!” crowed Time magazine in January of 1996. “The Hottest Ticket in Manhattan!” also read a Newsweek story that week. Both articles referred to the social swirl and acclaim that engulfed Fidel Castro upon his visit to New York by the very Manhattan media and business luminaries who barely escaped incineration at his hand. The occasion was UN’s fiftieth anniversary celebration, but the Castromania almost recaptured the hysteria for Simon and Garfunkel’s 1981 reunion in Central Park.

First on the Stalinist dictator’s itinerary was a luncheon at the Council on Foreign Relations. After holding court there for a rapt David Rockefeller, along with Robert McNamara, Dwayne Andreas, and Random House’s Harold Evans, Castro flashed over to Mort Zuckerman’s Fifth Avenue pad, where a throng of Beltway glitterati, including Mike Wallace, Peter Jennings, Tina Brown, Bernard Shaw, and Barbara Walters, all jostled for photo-ops and stood in line for the warmongering mass-murderer's autograph.

Diane Sawyer was so overcome in the mass-murderer’s presence that she rushed up, broke into a toothy smile, wrapped her arms around Fidel Castro, and smooched him warmly on the cheek.

"You people are the cream of the crop!" beamed the mass-murderer to the rapt and smiling throng he’d coming within a hair of incinerating and now surrounded him.

"Hear, hear!" chirped the delighted guests while tinkling their wine glasses in appreciation and glee. But many more were left panting, because according to the U.S.-Cuba Trade and Economic Council Fidel Castro had gotten over 250 dinner invitations from Manhattan celebrities and power-brokers.

Then with Congressperson Maxine Waters looking on in rapture, a beaming Charlie Rangel waddled up to the podium beside the terrorist (and racist) Castro and engulfed him in a mighty bear hug. Castro had to catch his breath, but he smiled and returned the rotund senator’s passionate abrazo.

The mass-murderer who craved to nuke New York was not only the man to see but the one to be seen with by New York’s elite.

Above I used the term “genuinely smitten.” Perhaps you think I succumbed to hyperbole, to cheap rhetoric?

Fine, then you amigos, study these pictures and decide for yourselves.

Fortunately for Manhattan’s elite, on Nov. 17, 1962, a man they love to hate, J. Edgar Hoover, foiled a Castroite plan to incinerate and entomb thousands of them. Cuban agents had targeted Macy’s, Gimbel’s, Bloomingdales, and Manhattan’s Grand Central Station with a dozen incendiary devices and 500 kilos of TNT. The holocaust was set for detonation the following week, on the day after Thanksgiving,

Castro and Che planned their Manhattan holocaust just weeks after Nikita Khrushchev foiled their plans for an even bigger massacre during the Cuban Missile Crisis. “If the missiles had remained,” Che Guevara confided to The London Daily Worker the following month, “we would have used them against the very heart of the U.S., including New York City.”

How the Highland Park Shooter Reportedly Obtained His Guns Is Beyond Ridiculous
Townhall
Lauren Boebert SHREDS Eric Swalwell for trying to tie her to Highland Park gunman SO savagely 'Fang Fang' trends
Twitchy
Chris Pratt's "The Terminal List" Is Sending Leftists Into Conniption Fits While Audiences Love It
Redstate
Yes, Ukraine Has a Nazi Problem, and Its Name Is Andrej Melnyk
PJ Media