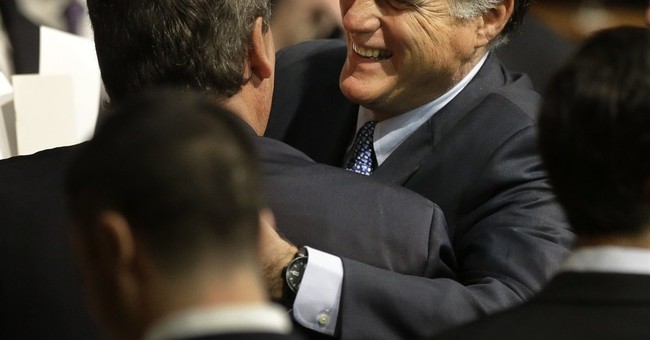 Mitt Romney's entry into the 2016 race for the GOP nomination has caught almost every observer of American politics flat-footed.

There are more and other talented candidates in the lists as well, but of them all two stand out: former Florida Governor Jeb Bush and the 2012 GOP nominee Mitt Romney. And for the same reason: They have experience in the most grueling of political arenas --the American presidential race.

Even those on the fringes of presidential campaigns past know how exhausting and taxing they are, how completely consuming and impossibly demanding they become on the candidate and on his or her family. Yes, they require lots of money, and Bush and Romney can both deliver far more than the minimum necessary to build and maintain and campaign team that will put them on all the primary ballots by all the deadlines. So too can many if not all of the others. The rules have changed, and big television buys aren't what they used to be. Building the deep web of interconnections and impressions via social media is done at a fraction of the cost of the national network buy, and to much greater effect. No, more than a few of the candidates will have more than enough money.

What Bush and Romney bring, and Governors Huckabee and Kasich and Senator Santorum as well, is actual, honest-to-God experience with the all-consuming, all-in nature of the beast. Others have been in big, state-wide campaigns. But only these five have lived them, and only the first two have a start-to-finish experience, though Governor Bush's experiences were as son and brother, not as candidate himself.

Hillary, of course, has been around the track so often she could have doubled the Triple Crown --1992, 1996, 2000, 2008, 20012 and now 20016. There's even a case to be made that her role in 2004's contest is close enough to count as a principal's because Bill and she were out on the hustings for John Kerry. There isn't anything or any situation she hasn't run into in some form, and very close to the same thing can be said of Romney and Bush.

Those are the advantages the big guns bring, and while they also present big targets, their staying power is not to be doubted. And in 2016, that will count for much.

Because the country is in a genuine crisis, and the happy talk about the economy and the oil dividend isn't fooling anyone who knows what the nation's debt means once the interest rate begin to tick up as it must inevitably do. The labor force participation crisis and the entitlement time bombs are real, and so too are the quadruple challenges of Russia, China, Iran and ISIS. The world is so perilous that even lefties see it, and look up from their parlor games on EPA regulations and various other pet causes to survey a world wobbling on the edge of chaos.

Paris did that. And so too last week did the Boko Haram, and last month the cold-blooded killers of the Pakistani school children and the fanatic in Sydney. The news is moving so fast that not even our diversions can block the bleakness out.

So the way is open for the substantive candidate, the man and woman who will, like Reagan, speak both seriously and with sincere optimism about America's role in the world and how to not only reclaim it but put it to good and very necessary use. The candidate who genuinely believes in American exceptionalism and can articulate its promise and its reconstruction will win.

I don't know--nobody does-- who will most persuasively address these most pressing issues and especially the pressing need to rebuild and revitalize America's military and to buttress its national security on many fronts, but the candidate who does that on the GOP side --who is believed to understand the issues and to have a plan for addressing them-- is best suited to defeat Hillary.

Every single one of the GOP candidates has at least one major flaw. But they all have an advantage as well: A public weary-to-death of nonsense dressed up as serious stuff. Community college tuition during the week that four million marched in Paris? The issuance of methane emission regulations as Boko Haram slaughters 2,000 innocents? Suicide bomber after suicide bomber but the president wants to veto a pipeline that lessons dependance on, and revenues to, the most unstable region in the world and the fountainhead of Islamist radicalism?

Jeb Bush and Mitt Romney have been around the biggest issues for the longest time. Neither would be intimidated by the "Clinton Machine," and they have as many planets and stars in their Bushworld and Romneyworld as are in Hillaryworld. Either is equally matched against the professional rent-seekers of the Democratic Party, and both have learned all the bitter lessons that Hillary has absorbed and sorted and filed away.

There is a love of the new, and that may win out in the GOP primaries. And there is great respect for folks like the governors who have gone toe-to-toe with their states' special interests and with the conservative senators who have learned to deal with the MSM that always has at least a few fingers on the media scale.

But if you have to do battle with the most battle hardened Democrat of them all, there's a lot to be said for the guys with the most scars. For one thing, they aren't even going to notice the rocks being thrown at them from behind. From the very beginning they know the real contest begins after the convention, not before it, and both of them will be thinking on lessons learned and new ways to wage these battles.

The pundit class is unlimbering all their rote critiques of the big names. It is so easy because the job ahead of the next president is so hard that anyone can be said to be lacking, and the campaign so long that every sling and arrow will be used up, and so many of the narratives already in the can.

The big difference between every campaign that has gone before and this one, is that this one follows the worst president in modern American history by a long shot, the most complete failure as Commander-in-Chief, the most epic gap between hope and performance.

Who's to say what will matter in the most serious election of our era? Nobody knows, and Bush and Romney will hardly be bothered a bit by the sharpies in D.C. who thought President Obama was a big deal and the real deal. It is going to be an epic political struggle, a real bruising battle first among the GOP and then against Hillary. But the promise is that this electorate is so clear eyed about the downsides of superficiality that the candidate with the best plan and the most transparent peal to experience and reason wins. That could be any of them, and any of them could beat Hillary if they are tough enough to withstand the battering ahead.