A Memo To Kansas Voters And Those Who Know Them 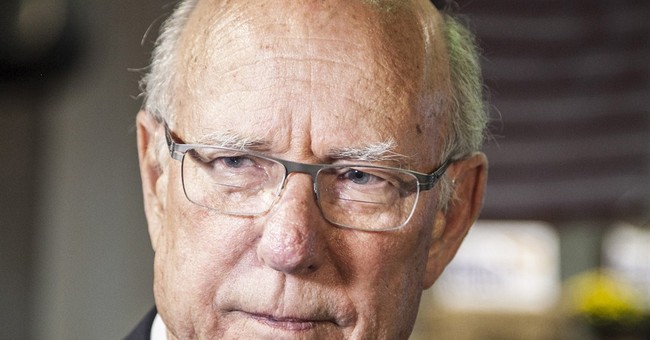 Trending
So a conservative messages me that GOP "deserves" to lose Kansas.

Their beef: GOP Senator Pat Roberts should have retired and let a "real" conservative run and win in a state Mitt Romney carried by 20+ points.

Well, Roberts didn't retire and it's a free country and he won the GOP primary. Roberts is the GOP nominee. He's also a Marine, by-the-way, a USMC captain back in the day in fact, and though that was a long time ago --he served from 1958 to 1962-- those four years in uniform are considerably more service rendered the country than a whole bunch of "RINO-hunters" I know and hear from regularly. Roberts also did a fine job while chairing the Senate Intelligence Committee. Roberts actually knows about ISIS, has pushed for stronger actions to stop them. He cares about the military and the defense of the country. He will also vote to put the control of the Senate's agenda in Mitch McConnell's capable hands. "Independent" nominee for Senate in Kansas, Greg Orman, won't. Orman will caucus with the Democrats. How do we know? Orman won't say who he will caucus with --that's how we know.

Here's the bottom line: Harry Reid wants people to vote for Greg Orman because Orman will caucus with Democrats and keep Harry in charge of the Senate. With the gavel that comes with the position of Majority Leader, Reid can push through all of President Obama's judicial nominees, block investigations into Benghazi, the IRS, the VA, the Service Service, Fast & Furious and every other Obama scandal simmering after six years of serial lying and cover-up. President Obama is safe from scrutiny and unhampered in his final two years if Orman wins.

Voting for Greg Orman or staying home is the single most self-destructive action a conservative, a moderate, or any sort of genuine "independent" could make in my lifetime. Speaking other than this truth is similarly self-destructive.

Voting for Orman or raging on Roberts are also spectacularly selfish acts, ones that ignores the real sacrifices of men and women in harm's way in Afghanistan and across the globe who need a Senate led by Mitch McConnell to rebuild their Pentagon and outfit them with the equipment they must have. The country needs a Senate led by Mitch McConnell to put a stop the confirmation of still more absurdly activist judges making it up as they go along, and spending money like there is no consequence to 18 trillion dollars of debt. Roberts' re-election gives McConnell the gavel that Reid has held for six long, destructive years. Voting for Orman keeps that gavel in Reid's cold hands.

"Conservatives" who bellyache about Pat Roberts aren't "conservative" at all. Ronald Reagan --yeah, I actually worked for him as opposed to most of the people complaining about Roberts-- would have nothing to do with such whiners. Not at this point in an election cycle. The country is threatened by real enemies with real weapons and by the deep, systemic incompetence of the amateur-in-chief at 1600. So stop complaining and get in the game. Call or email your friends in Kansas and tell them the real score. Orman is Obama's/Reid's cat's paw. Simple as that. Vote accordingly.

Transcript of interview with the Washington Post's Dan Balz;

Read and reflect. This isn't complicated. It isn't hard. It is, however, the future of the country.