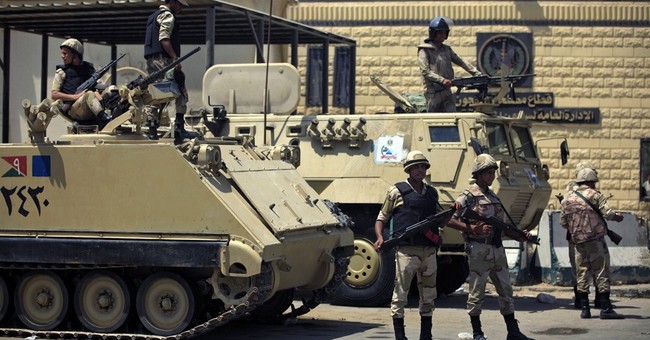 The use of chemical weapons against hundreds if not thousands of civilians in Syria and the burning of scores of Christian churches in Egypt raises the central question of our time: Will America stand by and allow pure evil to kill thousands on the basis of ethnic and religious identification?

Genocide aimed at Christians is brewing among the Islamists of Egypt and genocide against Sunni Muslims is on the agenda in Syria.

It is “complicated,” we are told, but U.N Ambassador Samantha Power wrote the book on genocide. Really. It is called A Problem from Hell: America and the Age ofGenocide. Surely Ambassador Power can unravel the complications.

But Ambassador Power skipped the meeting on the Syrian use of chemical weapons. Busy, busy, busy. She did tweet her outrage.

Think about that. To make your academic and journalistic bones writing about genocide and then to skip the meeting on...genocide.

The president made some speech somewhere about something having to do with how Obamacare isn’t the obvious disaster that it is. Joe Biden is gearing up for 2016. The Clintons are avoiding New York Times’ reporters. John McCain and Lindsey Graham are convinced the Muslim Brotherhood are a lot like the British Labor Party, shut out of British politics by the Labor and Tories in the late 19th century.

In short, it’s August in “Our Town,” and no one can be bothered to ask, much less be obliged to answer, the tough questions: How many churches must burn and how many Syrians must gasp for air and then die before President Obama and his cracker-jack team of advisors decide we have to act. In an F-18 kind of way.

Rather, hope at least one Republican –just one—stand up and says that Ronald Reagan would have supported General al-Sisi and would have punished Assad in such a way and to such a degree that they would bury his chemical weapons in a tomb so deep they’d find Atlantis before they found the remaining stockpile.

The Bush Doctrine would serve the country well right now, but President Obama dare not speak the name of the president who knew how to deal with killers with state power behind them and WMD in their arsenals: Destroy the state and hunt the killers.

That which gets rewarded gets repeated. The Brotherhood sees the U.S. undercutting al-Sisi and Assad sees…well, nothing. The Brotherhood knows to keep throwing those matches and Assad knows to keep the VX and Sarin coming. The president’s got a tee time and can’t be bothered. Samantha Powers has a book deadline for her successor volume: A Problem from D.C.: America in the Age of Genocides We Want To Ignore.

Oh, by the way, this all began on Secretary of State Clinton’s watch. She should be laughed off of every stage on which she appears to accept an award, unless it is the Sir Samuel Hoare Memorial Award, the “Templewood Medal,” not the Templeton Prize.

I hope to wake up tomorrow to see that everything I have written has been undercut by decisive American action on behalf of the innocent in Syria and the Christians in Egypt. But I am not holding my breath. The Syrians are –to no avail.