The Real Reporting on the IRS 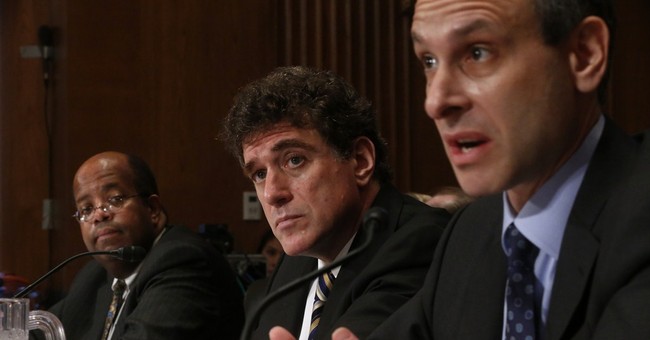 But if both reporters keep up their relentless focus on the details of the IRS scandal --"Targetcon," "Targetgate," "Senseless in Cincinnati" --their names will be far and widely known as the first two serious reporters to take the burgeoning scandal seriously.

Liebau labors at Townhall.com, and most her work appears first there in its "Tipsheet" column and eventually ends up easy to find and comprehensively categorized at CarolLiebau.com.

Johnson's work appears most frequently in "The Corner" at National Review Online, though her work on the IRS is getting landing page, stand-alone attention from the editors, as it should.

Johnson is a Yalie who won awards as a television producer for Sean Hannity and labored at the Council on Foreign Relations before throwing herself into print journalism, and that particular corner of print where the heavy lifting happens --investigative journalism.

Together the work product of the two has run circles around the big names and the old guard, who apparently haven't had time to figure out the IRS organization chart or to read the IG's report in detail, much less develop sources within the vast IRS bureaucracy willing and able to whisper some directions to the right office in the right building.

Now that the two are firmly established as out front and serious on the IRS scandal, expect additional emails to head their way, phone calls from friends of friends, and perhaps even the mother-of-all-journalistic finds --the documents arriving in the mail in an envelope with no return address.

Most of MSM remains in what can only be described as a stunned state, concussed by the rapid convergence of not one, or two but three huge scandals. The IRS revelations came after the first of the Benghazi blockbusters and before DOJ's hunting-and-gathering of journalists, but all three appeared suddenly out of the mist of endless talk-fests about gun control and immigration --real stories with new actors and obscure offices. Reporters couldn't pretend to do their jobs by calling up the second assistant to the third ranking member of the Senate Judiciary Committee. They actually have to read dense copy and translate bureaucratese, make trips to cities as far removed from the modern Versailles as Cincinnati and actually talk to tax lawyers.

The IRS story is huge. It is far greater than Tea Party activists, and embraces many, many religious groups and who knows who else. The attempt to muffle the sound of a crash is under Liebau's microscope as she traces who knew what when and who planted which questions, even as she painstakingly compares testimony of hearing one with hearing two. Johnson is working through the org chart, looking for names and GS levels, dialing up lawyers in the agency whose address has never been near the Buckeye State but who are knee deep in the muck.

Follow those by-lines. Give yourself a Google alert for both and watch the serious reporting and analysis pour into your mailbox. MSM is doing its best to mix Karl Rove into the mix, and blame Citizen United for what is an old fashioned "get your enemies" story, but new journalism doesn't depend on the kindness of Beltway editors.

The second term is just beginning, and every thread worth pulling will get its yank.