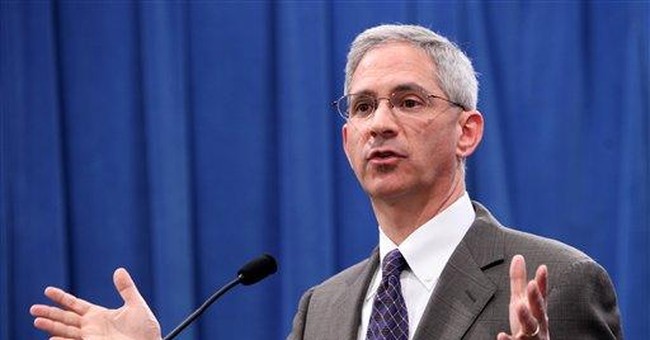 Athens on the Pacific will vote on June 8, and in those returns will be clues to much of what is ahead for the nation as a whole.

Former Governor and current Attorney General Jerry Brown wants to revive his long ago-closed show. Jerry's new revue is much better than the old one, and his occasional forays into seriousness when it comes to combating federal court orders to build billions in new prison hospitals are welcome reminders that with age often does come some wisdom. brown is running hard to the center because this is a year where the left appears to be doomed, even in the Golden State.

The Dems in California are actually pouring all their effort into getting Steve Poizner nominated by the GOP over former eBay CEO Meg Whitman, whose entire campaign has been built on taking an ax to the Golden States' massive spending addiction. Whitman's accomplished private sector management resume scares the daylights out of the public employee unions and their puppets in the Sacramento legislature, who would much rather manage inventor and nice-guy Steve Poizner if the GOP tide reaches full flood on November 2 and elects Republicans up and down the ticket. Arnold the super-hero on film turned out to have a glass jaw, and special interests are counting on the same inability to take a punch from Poizner. You don't build eBay without the sort of skills California needs and the unions thus fear Whitman in the general. How do we know this to be true? The San Francisco Chronicle recently endorsed Poizner. The Chronicle rivals the Los Angeles Times in its clueless hyper-leftism, and so its attempt to help Poizner into the ring against Brown sends shudders through the ranks of the Republican faithful.

The most interesting race that isn't drawing much attention outside the state is former Chapman University Law School dean John Eastman's quest to become the successor to Brown as the state's Attorney General . If the extraordinarily accomplished Eastman becomes the second most powerful AG in America, the cause of constitutional originalism will have a formidable new advocate --and Obamacare a tenacious new foe with resources at his disposal to battle the takeover of American medicine by Washington.

The three-way race for the GOP nomination to take on Barbara Boxer will also carry enormous clues to the fall. Former Congressman Tom Campbell is slightly ahead in polling now as the two conservatives in the race --former Hewlett Packard CEO Carly Fiorina and state legislator Chuck DeVore are dividing the conservative vote between them. The intervention of Sarah Palin on the side of Fiorina could break the race decisively toward Fiorina. If it does --and in a telling televised moment CNN's inhouse conservative Erick Erickson began to shift from DeVore to Fiorina this week-- the importance of Palin's blessing in GOP politics will grow even greater than its already considerable size.

California seems ready to have a serious campaign on the state's fiscal collapse and a referendum on those special interests that have brought the state to its knees. It may already be too late to avoid the bankruptcy that looms, but rebuilding the engine of the American economy needs to start somewhere. A serious challenge to the Sacramento special interests is that place.