The Coming Referenda on Obamacare 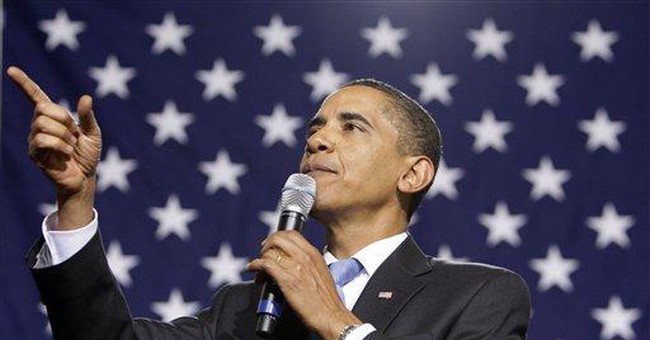 The contests for statehouses in New Jersey and Virginia are the best referenda the country could ask for on Obamacare, and Congress would be wise to wait to see how these two states vote in November before it takes any final vote on the president's plans to radically rewrite the rules of American medicine.

An anti-Democrat trend is also shaping up in New Jersey where GOP nominee Chris Christie is also far ahead of incumbent Jon Corzine.

Both New Jersey and Virginia went for President Obama ten months ago and thus should be providing their liberal nominees with a cushion, not a collapse. What has happened?

The answer is obvious: the president's policies are deeply unpopular outside of the Beltway and the hard left precincts of the Democratic Party, and the idea of giving even more power to the party that controls all the levers in D.C. is out of the question. The stimulus is understood not to have worked. The cap-and-tax-and-tax-and-tax House bill threatens every business in the land. The vast deficits dwarf those that triggered anger against Republicans. And now Obamacare looms over every American with health insurance they like, including seniors who understand that the president's program targets Medicare and thus their access to doctors and treatments.

Polling on the health care scheme being pushed on the country show its support plummeting and opposition soaring. Even a huge infusion of cash from Big Pharma on behalf of the "government option/public plan" will not decisively impact the debate. The ice has hardened, in fact, and the doctors America depends upon are overwhelmingly against the scheme which means that most patients who talk to their physicians will hear the same negative message. All of AARP's spin can't change this, and the doctors won't sit quietly by as their profession is nationalized no matter what the AMA advises. A San Diego neurologist e-mailed me yesterday saying that he was refusing to meet with any pharmaceutical rep until Big Pharma withdrew from the field. I expect that sort of hostility will deepen, and those sorts of actions will spread. Unlike most debates inside the Beltway, this one has immediate and huge real-world implications for tens of thousands of professionals and millions of seniors, not to mention everyone with health insurance through their employer. Spin doesn't work when people are paying close attention. The president's "guarantees" aren't believed.

Pursuing such a deeply unpopular and obviously ideologically-driven extremist solution like a "government option/public plan" is a recipe for electoral disaster for Congressional Democrats and even races far emoved from the federal level. Allowing Nancy Pelosi to slander the huge majorities against Obamacare is not good politics, but telling people to sit down and shut up as the president did in Virginia last week --"Get out of the way!"-- is even worse. Arrogance never works in politics.

The president is still well-liked, even by many conservatives, but his agenda has disquieted the center and everyone on the right. Even many Democrats and not just the Blue Dogs are worried that the huge lurch to the left if the fist six months of the new administration has sowed the seeds of a counter-reaction next November.

Whether that counter-reaction is building into a huge political shift back to the right will be clearly visible after November's votes, and if Democrats see two statehouses swept away, they will know that the center of American politics has rejected the grab-bag of initiatives and massive deficits as well as the president's excuse that he inherited all the problems besieging the country. The Bush-bashing is already a tired tune, and even those who have talked themselves into believing the housing bubble was W's fault know that the public doesn't much care for excuses.

Self-preservation is telling the Blue Dogs that the president's insistence on the radical parts of his program is a legislative suicide note, and they are reluctant to sign. Even some Senate Democrats must sense a huge and unnecessary risk in the president's plan. If Corzine and Deeds can rally and win against the backdrop of the debate in D.C., these fears will be allayed and a vote taken on health care with much less risk a year out. A president concerned with his party would wait to see how the agenda is affecting his colleagues.

But because the president's pollsters must be seeing the same thing as everyone else, don't expect him to accept a delay until the referenda are in. The hard sell is all he has left, and if the Congressional Democrats lack the spines to resist it for two months, they will have no one but themselves to blame a year hence.