The World's Greatest Rubberstamp Body: Will The Senate Fold? 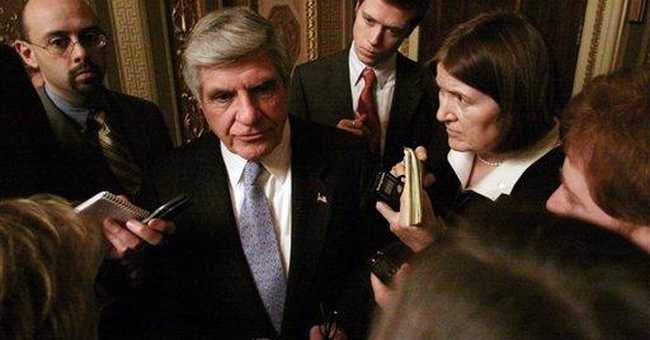 Very few people are left in Washington, D.C. who believe the "stimulus" bill is anything like a genuine stimulus bill.

People aren't debating whether or not it will work to quickly inject energy into the lethargic economy.  They know it won't.

People aren't debating the priority of the public works the bill proposes, because there are very, very few public works proposed.

"More than 300 amendments have been offered, but only 20 were debated. No hearings were held, no expert testimony heard," the D.C. Examiner observed.

“When the American people learn what this bill contains they will reject it," Oklahoma Senator Tom Coburn proclaimed, but the truth is, the public already has rejected it.  Opinion polling shows support for the porkapalooza dropping fast.  Thus the Senate's rush to push it through.

"[T]he process stinks, and the substance of the bill sucks," Senator Lindsey Graham bluntly declared in an interview on my radio show.  Graham and his colleagues were speaking freely against a very popular and newly elected president because the bill he has demanded is so deeply flawed that there is no choice but to speak against it.  A dozen Democrats in the House rebelled when Nancy Pelosi first kidnapped the idea of a stimulus and used it as a Trojan Horse for every program and wish list denied the Democrats through the Bush Years.  The Bush Years were hardly those of fiscal discipline, but they look like models of sobriety compared to the first fortnight of Obama.  A pack of House Blue Dogs bolted, but not enough to force real change on the "real change."  It would be up to the Senate, and no doubt more than a few House Democrats who know this bill is the legislative equivalent of bleeding the patient hoped that the Senate would recast the "stimulus" into, well, a stimulus.

The Senate leadership is at least as driven by politics as Nancy Pelosi, and with a love of pork even greater than is generally abroad in the House because each of the 100 (99 with the unfilled Minnesota seat) have entire states to feed.  With a greatly reduced GOP caucus --41, with moderates there in the persons of Senators Collins and Snowe from Maine, Specter of Pennsylvania, and Voinovich of Ohio-- some common sense and votes to deny cloture would have to come from the Senate Democrats who claim the label moderate, like Ben Nelson of Nebraska.  GIven that those dozen Democrats bolted in the House and many more were troubled by the bill, hope for serious retooling rested on a handful of senate Democrats, but they have yet to make a concerted effort to salvage the bill.

How bad is the bill?  The Congressional Budget Office --run by the Democratic majority and staffed by appointees of the Democratic majority, but nevertheless professional economists of the sort who don't want their reputations forever impaired-- announced on Wednesday that the bill as proposed would actually harm the economy, causing the Gross Domestic Product to actually shrink over the next decade.

That's why Senate Democrats are trying to rush through a cloture vote --the evidence is piling up that President Obama's first big bill is a massive mistake.  Rather than take a trip down to 1600 and explain this to him in the privacy of the Oval Office, his Illinois colleague Dick Durbin --number 2 in the Senate-- is pushing the bill that contains a $2 billion dollar earmark for a new "zero emission" power plant in their home state. It isn't just Durbin --all of the majority's members see a once-in-a-career-opportunity to slice off a gigantic slice of bacon for the home front.  Their collective conscience about what they are doing to future generations --and what they are not doing for the economy right now-- is simply gone.

The only thing that can rekindle that conscience about their larger calling is public outrage, which has been building and which continues to mount.

The bill is an Ayres Rock of bad legislation, so obviously horrible from so far away that voters in every state have noted its exceptionally awful features and are watching now to see who does what with it.  To vote for this bill is to sign on to crew a doomed ship, and the GOP has quite rightly defined the issue and taken a nearly unanimous stand against it, in a stroke reviving its brand and contrasting themselves with the feckless spending that is in the Democrats' genes.

Yes, when the GOP was in the majority, it poured money into programs such as the prescription drug benefit and No Child Left Behind, but you knew where the money was going and what it was buying.  Mostly the GOP spent money on the war with the jihadists.  By contrast there is almost nothing in this bill for the Pentagon.  A trillion for pork, a few pennies for defense.

And when the last president demanded billions in a hurry, the money was poured into the banking system, and it worked, though not without waste.  Government by definition wastes, but the fiscal water was poured on the financial fire.  This bill proposes to pour it onto the sand.

There is still time for some Senate Democrats to acknowledge the bill's deep defects.  Dianne Feinstein is a sharp legislator who knows how the California economy really does need a boost for housing.  Max Baucus and Jeff Bingaman are two long-serving members of the Fiance Committee who must know that this bill is fiscal Hemlock. Blanche Lincoln of Arkansas is facing a tough re-election battle in a state that will not quickly forget that signed on to this travesty.  Ben Nelson of Nebraska has a reputation for seriousness that is in danger of being lost.  There are others as well.

The economy is fragile and needs short term stimulus.  There are many crucial projects that could be undertaken with a half trillion dollars. The country and the Republican Party will support a genuine stimulus package.  Thus the President and the senate Democrat have before them an opportunity to deliver an important and timely piece of legislation that can serve the country and bolster their party's fortunes at the same time.  How they have managed to corner themselves into attempting to shout down the informed opposition and divert the attention of a focused public is beyond me, but  it isn't too late to salvage the situation, and with it the opportunity to help the economy right itself towards growth.