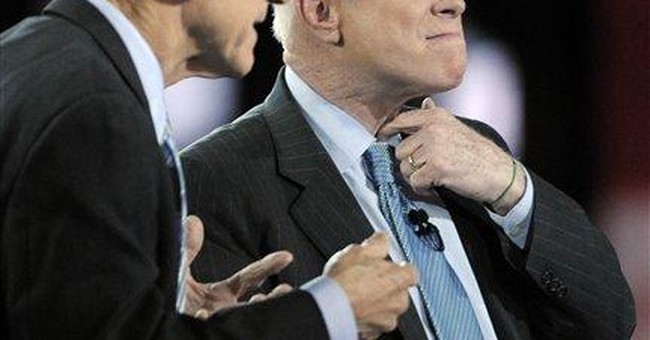 In the two days since Florida and in the one day from the debate at the Reagan Library, conservatives across the country are sounding the alarm that John McCain's nomination means the end of the Reagan agenda. Blogger Dan Riehl spelled it out in a reflection on what the Mccain-dominated GOP's party platform would look like, and it isn't pretty.

Talk show host Mark Levin penned a cri de coeur at NationalReview.com, one that is repeated again and again by many other veterans of the Reagan Revolution on and off the airwaves.

Talk show hosts Laura Ingraham and Rush Limbaugh, Sean Hannity and me all underscored in hour after hour of programming that conservatives now face a very clear choice: McCain or Romney. A vote for Huckabee or Paul is a vote for McCain.

And in Wednesday night's debate, Romney moved quickly to remind Republican voters that he and John McCain differ sharply on Bush's tax cuts and exploration in ANWR, which McCain opposed, and McCain-Feingold and McCain Kennedy immigration "reform" which McCain not only supported but authored. The two also clashed on global warming, and John McCain's big government "solution" to climate change represents the biggest regulatory burden on business in the modern era. Romney pointed out that the proposal co-authored by Mccain and Joe Lieberman would put a crushing cost on American consumers, ship tens of thousands of jobs out of America, and do nothing to clean the global environment because it is not a global solution.

John McCain saved Romney the trouble of going negative in the debate by putting on open display the temperament that has earned John McCain a measure of infamy in the Senate and beyond, and McCain's refusal to back away from the obvious-to-all low-blow distortion of Romney's Iraq positions left a queasy feeling among even McCain supporters. This was not a display of anything like the skills that would be necessary to defeat Senator Obama in the fall. In fact, just the opposite.

Many heads in the spin room at the debate from which I was broadcasting were shaking after the Giuliani press conference as McCain looked bleached and worn out. They were still shaking after McCain’s shaky debate. On many Republican lips was a familiar name: Bob Dole.

Bob Dole, without the conservative principles, perhaps, or the energy.

Romney by contrast was as polished and professional as ever, and his command of the facts and the debate far superior to that of McCain's. Romney's problem sat at the end of the stage --Mike Huckabee, the conservative coalition splitter. Amiable, smart, and ambitious for the vice presidency, Mike Huckabee is staying in the race not to win it --Huck's far too smart to believe that fantasy-- but to keep the conservative opposition to McCain divided.

Will Huck succeed and throw the GOP to McCain?

MSM thinks so, but they also thought Hillary was headed into a double digit blow-out in New Hampshire. MSM is assuming that the vast majority of Giuliani supporters break for McCain and that Thompson, Huckabee and Paul voters don't break to Romney now that the race has clarified.

Many people are assuming many things, but Super Tuesday is a big day and a large map. Many conservatives are unwilling to return the party to its 1968 through 1979 leadership and ideas. Only Tuesday night’s results will tell us if they are sufficiently numerous to keep the Romney campaign for the Reagan agenda alive and moving forward.