No Ceiling... and the Sky is Falling 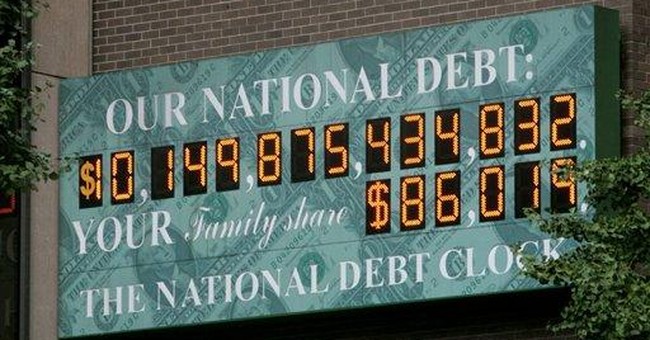 The irony of the United States’ current financial situation is that it would be absolutely impossible for any business or private citizen to ever wind up in such dire straits. It literally couldn’t happen, as there are far too many safeguards that would kick in to prevent the sort of uncontrolled, addictive descent into unprecedented debt (and deficit spending) that we currently see gripping Washington D.C.

If companies spent this way they would go bankrupt – their assets auctioned off to repay investors. Private citizens? Their credit scores would be ruined, and no financial institution would ever lend them money again.

Yet as is so often the case, the U.S. Congress is not governed by the fiscal realities the rest of us must face. In fact, whenever Congress needs to borrow more money to fund bureaucratic bailouts, soaring entitlement obligations or new deficit spending, it simply raises its credit limit (or “debt ceiling”) to make these new unnecessary line items appear to be legitimate.

Of course, words like “out-of-control” or “unsustainable” don’t really cut it these days when it comes to Washington’s impending budget disaster.

We are looking at nothing short of catastrophic recklessness – as well as an unmitigated contempt for future generations that is likely to cripple our nation’s economy for decades.

Rather than coming to grips with this crisis by cutting spending obligations and working toward paying down the deficit, the U.S. Congress is instead moving toward the largest-ever increase of its debt ceiling – less than a year after raising the ceiling to its current level of $12.1 trillion.

“We ought to pass a debt limit extension that gets us through next year,” House Majority Leader Steny Hoyer said recently.

Actually, the House thought it had already done that, which goes to show just how quickly these politicians are blowing through borrowed money.

At the request of President Barack Obama’s administration, the House voted earlier this year to raise the debt ceiling to $13 trillion, but it now appears that even this stratospheric number will prove incapable of containing the coming year’s spend-fest – complete with its record $1.5 trillion deficit.

In fact, the national debt is expected to charge past the $13 trillion threshold by the middle of next summer, which assumes that the federal government incurs no new obligations – like, for example, a massive socialized medicine proposal.

So how high will Congress raise the ceiling? And here’s an even more frightening question – what happens when that credit limit is surpassed?

Obviously we don’t need a crystal ball to answer the second question. Congress will raise the debt ceiling as often as it wants – by as much as it wants.

For example, after holding steady at $5.9 billion from 1997-2002, the debt ceiling has more than doubled over the last seven years according to data released by the White House Budget Office. Of course these automatic votes rarely receive much – if any – publicity. In fact, the provision authorizing the jump to the current $12.1 trillion limit was buried deep within the federal “stimulus” bill.

That is truly the definition of a limitless reserve – but the unavoidable reality is that every dime of that skyrocketing tab must be paid back by the American taxpayers, who can simply no longer afford to finance Washington’s reckless credit card spree.