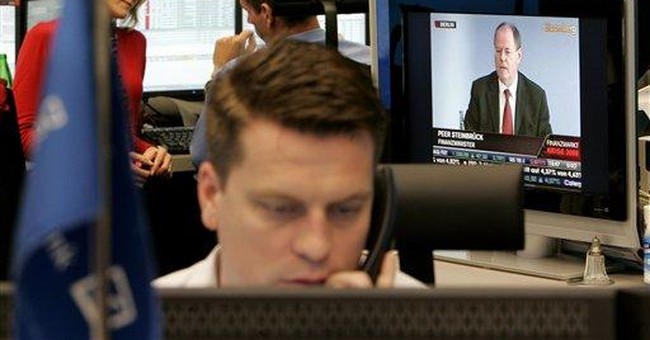 Whether it's the ongoing earmark parade, a burgeoning buffet of special interest pork, increasingly unsustainable entitlement spending, the $700 billion bailout of failed, government-mandated lending or the latest bailout plan – $150 billion to state governments and new federal infrastructure projects – clearly Washington politicians are in a giving mood.

But who's really doing the "giving?" And who truly stands to benefit?

At the heart of the latest proposed bailout boondoggle is a projected $54 billion hole in state budgets across America. This price tag has nearly doubled over the past twelve months and stands to worsen before it improves as our nation's government-inspired economic woes show no sign of relenting.

Florida and New York also face shortfalls of more than $5 billion apiece, and in an election year the urge to reach out and "do something" on behalf of other floundering state governments (and their electoral votes) is proving irresistible.

And so Congressional leaders are doing what they always do – "not resisting."

After raising our national debt to an unheard of $11.3 trillion this year (which adds tens of billions in annual interest payments to foreign governments) and covering the failed mortgage margins of Fannie Mae and Freddie Mac, now Washington wants to "stimulate our economy" by throwing billions more into new federal "infrastructure projects" and an unprecedented bailout of the states.

Make no mistake, though, this $150 billion boondoggle has nothing to do with "stimulating our economy" and everything to do with protecting and expanding government bureaucracies at the expense of private sector jobs.

Like reckless teenagers whose chronic and costly indiscretions are being lumped onto their parents' credit card debt, Congressional leaders are attempting to shield state governments from the consequences of their bad behavior – all while forcing hard-working Americans to pick up an ever-escalating tab.

Frankly, it's obscene. If anybody should be receiving $150 billion right now its American families and small businesses, not the government bureaucracies whose inability to restrain their voracious appetites over the past five years have put us in this hole to begin with.

How are we ever going to teach state governments to live within their means if we keep bailing them out every time – on credit, no less?

But sadly, that sort of common sense approach is not how the federal government views the situation, which is why each year hundreds of thousands of unnecessary bureaucrats at the federal, state and local levels get automatic pay raises and benefit increases (no matter how well they've done their jobs) while millions of Americans in the private sector get laid off, lose their health benefits or are forced to work two jobs just to make ends meet.

Government – as the history of our nation has shown time and again – exists solely for the purpose of perpetuating its own best interests, not those of the people it purports to serve.

The result of that self-serving obsession is a steady expansion of federal control over our lives and a deeper reach by federal tax collectors into our pockets – which of course diminishes our individual freedom and collective prosperity.

Sadder still, it seems that times of crisis bring out the very worst in our leaders, who invariably prefer abandoning the principles our country was founded on rather than standing up for them at the very time such wisdom is most urgently needed.

Such are the roots of government's chronic urge to "do something," an ever-present inclination that becomes altogether insatiable in an election year.

Well, government should "do something." It should stop this latest "bureaucrat bailout boondoggle" and give that $150 billion back to the hard-working people who are sending it to Washington in the first place.