Killing the Goose – The UFCW’s Assault on Stop & Shop

Horace Cooper
|
Posted: Apr 22, 2019 12:51 PM
Share   Tweet
The opinions expressed by columnists are their own and do not necessarily represent the views of Townhall.com. 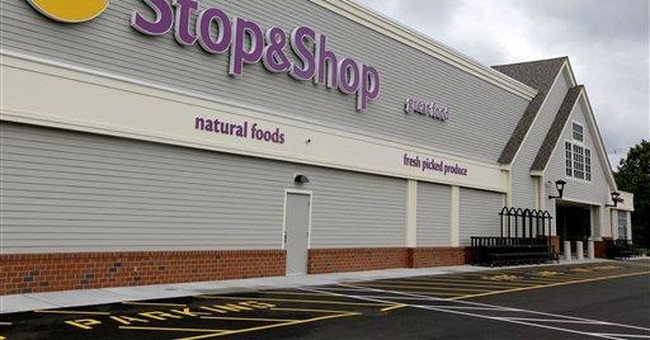 More than a week ago one of the biggest grocery store strikes on the East Coast started. Now it’s over. Negotiations over a new contract between Stop & Shop and the United Food and Commercial Workers International Union (UFCW) broke down and didn’t take long for the strike to make the record books as the company’s longest in its history.  According to Burt Flickinger, a consumer and labor history analyst at Cornell University, the last strike for the roughly 120-year-old grocery chain was more than 30 years ago and then it lasted only 4 hours.

When this strike began, the stakes were much higher. Stop & Shop is one of the few remaining unionized retailers and it faces stiff competition from its non-unionized competitors.

To ensure the chain can stay competitive, Stop & Shop put together a 21st century compensation package for its workforce. It isn’t a slash and burn strategy by any means. It built upon Stop & Shop’s reputation as a community leader partnering with a workforce that seeks to provide the best customer service possible including innovations such as personal shopping assistants and interactive testimonials with shoppers and the retailer allowing the grocer to provide the best possible shopping experience.

Stop & Shop’s offer provided for greater pension protection, a path forward for pay increases and only modest changes in the health care the firm provides.

Rather than embrace the change market circumstances of the 21st century the UFCW responded in an irrational way – seemingly employing a “burn down the village to save it” strategy. Almost reflexively, union leaders misrepresented the proposal claiming that it cuts wages and eliminates health care coverage.

In addition to the strike, the UFCW tried to politicize the dispute by inviting big political guns like Elizabeth Warren and Joe Biden to weigh in on their side.

Regardless of which politicians engaged in this dispute, the fact remains that it was essential that the union not be allowed to destroy this retailer.  The union’s obduracy is reminiscent of the destructive actions of the United Automobile Workers (UAW) that led to the downfall of Saturn, the innovative subsidiary of General Motors.  Saturn was conceived as GM’s import fighter and it was set up initially with workforce rules that encouraged flexibility and a contract that provided employees the opportunity to be shareholders – ultimately giving them a stake in the success of the overall operations.

While the workers (and customers) loved the Saturn experience, the UAW leadership never embraced the new workforce relationships or the contract.  In fact after a decade of opposition, the UAW ultimately was able to force GM to end its partnership approach and place Saturn workers under the same contract as the rest of GM’s operations.  It was this attitude that led to Saturn’s downfall – making it unattractive for Roger Penske and his investors to rescue the carmaker when General Motors went into bankruptcy.

The early 20th century approach of the UFCW creates the same challenges for Stop & Shop. Just as the UAW walked away from the nearly 10,000 autoworkers when Saturn was forced to shut down, the UFCW should recognizes similar risks in their interactions with Stop & Shop.

UFCW’s strike disrupted the livelihoods of not only Stop & Shop operations, but also the household budgets of more than 80,000 workers.  Adding in the disruption to customers impacted by closed or reduced operations, UFCW’s decision to strike was blind to the effects of their actions.

Ostensibly this dispute was over “dramatic” changes in health care payments by Stop & Shop employees. However, the facts show otherwise.  Yes, the grocer increased what employees would contribute, but the proposed employee contribution increases still kept premium contributions well below the national average for employee payments.  In fact the increase averages a modest $2 – 4 a week and even at that level, Stop & Shop will pay at least 92% of premiums for family coverage and at least 88% for individuals.

In addition, despite claims to the contrary, workers are not being required to change health care providers.

Furthermore Stop & Shop offers a defined benefit pension for workers that is 100% funded by the company and in fact the company is increasing support to the pension fund by 20% in order to make sure that it can maintain benefits in the future.

Where the rubber meets the road, pay increases are also being offered to Stop & Shop employees even though UFCW’s leadership’s told the media and its members that the new contracts cut salaries.

Sticking to 20th century contract terms stubbornly isn’t in the interest of Stop & Shop’s workforce or for their customers.  Competitive health care insurance, pay increases as well as pension benefits are all part of this new contract.  Now that the strike is over, the UFCW going forward should work to collaborate with Stop & Shop rather than try to kill the goose that lays the golden egg.