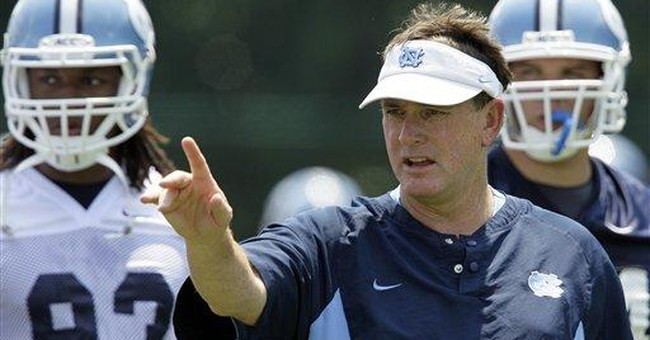 If you follow big time college sports as I do, the latest news out of the University of North Carolina about bogus classes and inflated grades involving more than 3000 students over two decades has to be of great concern.

It has been apparent that the student-athlete in Division I schools is an oxymoron. There are occasional stories of the college graduate who reads at the third grade level or the football star who couldn’t find a classroom on campus. Now, however, a scandal has been reported bigger than any previously mentioned.

According to the report by former federal prosecutor Kenneth Wainstein, football and basketball players took no-show courses in the college’s African and Afro-American Studies programs earning passing grades. Students didn’t have to show up for what was deemed a “shadow curriculum” in the 1993 to 2011 period. Within this period the cherished N.C. basketball team won three of its five national titles. And Coach Dean Smith was virtually beatified by alumni members as a venerable state leader.

Two people at the center of the controversy, former department chairman Julius Nyang’oro and retired administrator Deborah Crowder, have been cooperating with Mr. Wainstein after criminal charges were dropped. School Chancellor Carol Folt characterized the matter as “a case where you have bad actions of a few and inaction of many more.” This latest inquiry comes on the heels of an investigation by former Governor Jim Martin who found there were lecture classes in the 1990’s that never met.

Ms. Crowder claimed she simply wanted “to help students” who weren’t supported by the university. This, of course, is a curious way of providing assistance. Mr. Nyang’oro admitted to “leniency,” but dereliction of responsibility goes beyond leniency. This was a case of awarding high grades for little or no performance. And despite protestations of innocence, every administrator in the university and every coach in the football and basketball programs had to know what was going on.

The report noted that counselors working with these athletes often steered players to the non-existent courses. Others complained to Ms. Crowder that conventional courses athletes would have been obliged to take were “too demanding.”

Clearly this isn’t the only example of academic fraud since even stellar institutions such as Duke, Harvard and the Naval Academy have been tainted by scandal with student-athletes in recent years, but the North Carolina example stands out as an egregious case of systematic institutional abuse. The eight month investigation by Mr. Wainstein has opened a Pandora’s Box of misconduct far more egregious than anyone imagined when the investigation began.

Clearly big time college sports generate big-time television contracts and big time money. Star athletes are really not expected to be students. When Johnny “Football” Manziel was at Texas A&M, he took a good number of courses online, including all his classes the Spring semester of 2013. There is a barely kept secret about Division I athletes in which the NCAA is complicit: these athletes are not expected to be students. The amateur tradition is dead, a casualty of money and alumni bragging rights.

While Mr. Wainstein has not been asked to investigate practices in other colleges, my guess is he would be likely to uncover examples like the one at the University of North Carolina.

Perhaps it’s time to excoriate the hypocrisy and admit as John Calipari, the University of Kentucky basketball coach does, that he doesn’t expect his players to stay in school for more than one year. In his mind, they are at Kentucky to refine their skills for a pro-career. Academic work was for another time, an earlier generation.

I can recall a moment at Columbia in the 1950’s when I was on the basketball team and the number one player in the nation was suspended for a semester after cheating on an exam. There wasn’t any fuss, no newspaper account and no alumni uproar. Basketball players in yesteryear were expected to be students. Some failed in their academic work, but the expectation wasn’t compromised.

It would seem that university integrity has been sacrificed for the lure of bitch goddess Mammon. College athletics has become a semi-professional affair and ethical standards at Division I schools are very often in a state of perpetual relativism.