"You Do Your Worst, and We Will Do Our Best"

Helen Raleigh
|
Posted: Jul 16, 2016 12:01 AM
Share   Tweet
The opinions expressed by columnists are their own and do not necessarily represent the views of Townhall.com. 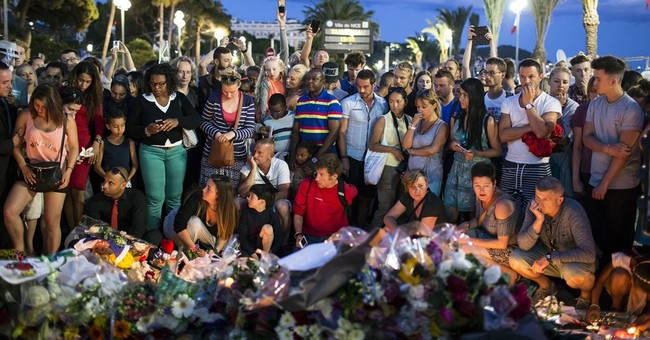 On July 14, 2016 in Nice, France, Bastille Day started as celebration of freedom and ended as a tragedy, after a terrorist drove a truck into a crowd and mowed down innocent people.  Like many others, when I first heard this news, I couldn't believe it: what kind of crazy world do we live in that it's become increasingly difficult to carry on a normal life? What kind of sick and twisted soul would believe that taking innocent lives was his surest ticket to heaven?

We don't know when and where the next attack will take place.

But one thing we can be sure of is that it will happen again. We are facing a mortal enemy who is bent on destroying everything we hold dear: people, ideas and our way of life. Our enemy won't give up until they achieve total destruction. The question is, what should we do?

Last night, I sought answers and inspirations from the "old lion," Winston Churchill. Exactly 75 years ago, on July 14, 1941, Churchill delivered an inspiring speech paying tribute to rescuers in London after nearly nonstop air raids by Nazi Germany. In his speech, Churchill acknowledged many challenges Londoners faced as the result of the air raids, such as mass casualties, power shortages and broken railways. Yet, all Londoners carried on and no services were disrupted because "the courage, the unconquerable grit and stamina of our people, showed itself from the very outset. Without that all would have failed. Upon that rock, all stood unshakable."(Churchill)

Air raids would happen again. Londoners knew it and Churchill knew it. But Churchill had full faith that people "will be ready, will not flinch, we can take it again." Neither Churchill nor the rest of London had any delusion that the next attack would be easier to withstand, nor did they believe somehow they could negotiate their way out with their mortal enemy.  Churchill made it very clear in the following sentences, probably some of the most inspiring words ever being uttered:

"We ask no favours of the enemy. We seek from them no compunction. On the contrary, if tonight our people were asked to cast their vote whether a convention should be entered into to stop the bombing of cities, the overwhelming majority would cry, 'No, we will mete out to them the measure, and more than the measure, that they have meted out to us.' The people with one voice would say: 'You have committed every crime under the sun. Where you have been the least resisted there you have been the most brutal. It was you who began the indiscriminate bombing. We will have no truce or parley with you, or the grisly gang who work your wicked will. You do your worst - and we will do our best.' Perhaps it may be our turn soon; perhaps it may be our turn now."

Like 75 years ago, today, we live in "a terrible epoch of the human story."  What's more challenging compared to 75 years ago is that not only are our enemies bent on destroying us, but also their foot soldiers are among us and can't be easily identified. To make matters worse, many of us do not have the kind of conviction in our ideas and way of life like Churchill and the Londoners had 75 years ago.

Where do we go from here? The only way we can win the war on terror is to have more resolve and stronger determination than our enemies.  We have to fight relentlessly on two fronts: the physical war and the ideological one. We have to hit back the worst with our best: our best soldiers, best equipment and most importantly, our best ideas. We have to be prepared to engage in a prolonged battle, and "We shall never turn from our purpose, however sombre the road, however grievous the cost, because we know that out of this time of trial and tribulation will be born a new freedom and glory for all mankind."