How Captain America Convinced Me Not to Vote for Trump

Helen Raleigh
|
Posted: May 27, 2016 8:14 AM
Share   Tweet
The opinions expressed by columnists are their own and do not necessarily represent the views of Townhall.com. 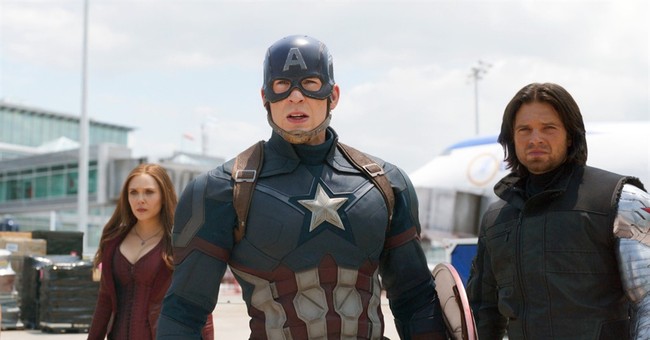 I have to admit that I have never been a comic book fan. Super heroes with flat abs, bulked muscles, extraordinary abilities and figure-shaping costumes were not something I grew up with. So when my husband dragged me to watch the latest Marvel film, "Captain America: Civil War," I had planned to take a two-hour nap in the darkness on one of those plushy comfortable chairs in the theater.

But I didn't. The plot and the main character - Captain America - kept me engaged the whole time.

If you haven't seen the movie, here is the spoiler alert. The basic plot of the movie is that the U.S. government, tired of the number of civilian casualties and property destruction that the Avengers had left behind after their do-good missions, urged/convinced the Avengers to sign the Sokovia Accords, which would place them under the control of the United Nations. Some of the Avengers, led by Tony Stark/Iron Man, believed that having the UN oversight was a good idea and quickly signed their names. But another group of Avengers, led by Steve Rogers/Captain America, refused to sign their names because of the concern that they might lose their autonomy to do what they believed to be right and act accordingly whenever necessary. Thus, a civil war inevitably broke out between the two factions of Avengers. I won't spill any more details. But anyone who hasn't seen this movie yet should go to a theater now.

The plot resonated with me perhaps because it mimics the current state of struggle within the Republican Party about whether to support Trump as the Party's presidential nominee; whether every Republican is obliged to a unified party; whether we should jump on the Trump train in order to defeat Hillary even if we feel Trump doesn't represent our values and stand for our principles.

I can't speak for anyone else except myself. I had been excited for this presidential race. It's the first presidential race where I will cast a vote since becoming a U.S. Citizen. I registered to become a Republican as soon as my citizenship ceremony was over, because the principles the traditional GOP platform stands for, such as pro-limited government, free markets, free trade and individual rights resonated with me. I had planned to volunteer for the GOP presidential campaign until Trump became the presumptive GOP presidential nominee. I don't need to list all the shortcomings and character flaws of Trump, many people have already done so. All I can add is that he stands for nothing except bigotry. In his world, everything including conscience is up for negotiation and can be easily bartered for something else that suits him.

Trump doesn't represent me and the principles I thought the GOP stands for. I can't bring myself to vote for him, yet most of my Republicans friends keep telling me that they don't like him either but I should jump on the Trump train because it's important to have party unity. Our ultimate goal is to defeat Hillary and that goal should trump any principles. If I don't vote for Trump, they told me, I would end up voting for Hillary implicitly.

What should I do? The movie "Captain America: Civil War" prompted me to seek answers from Captain America, after all, he and his friends struggled with some fundamental disagreement too. What Captain America said really got my blood boiling: "Doesn't matter what the press says. Doesn't matter what the politicians or mobs say. Doesn't matter if the whole country decides what is wrong is right. The nation was founded on one principle above all else: the requirement that we stand up for what we believe, no matter the odds or consequences. When the mobs and the press and the whole world tell you to move, your job is to plant yourself like a tree besides the river of truth, and tell the whole world, 'No, you move!'"

I had never imagined finding such an inspiring speech in a comic book.

The #NeverTrump group is fast dwindling, many Republicans have jumped on the Trump train either happily or holding their noses. I'm especially amazed at how quickly politicians abandoned their positions. But I can't. I compromised once before.

When I was growing up in China, my only voting experience took place in a school. Every semester, we “voted” for a class president. At our young age, we were already conditioned to the unspoken rule: we always chose the one who was the teacher’s favorite. There was one time when I was in high school, several of us chose to vote for someone else because we were fed up by the special treatment the class president enjoyed: he cheated on exams but our teacher turned her eyes away. Even without our support, the current class president was still the clear winner since he had most votes. Yet, after the 1st round of the “election”, our teacher didn’t let us leave the classroom. She made us vote again, and again and again. We were only let go when the current class president was “unanimously” reelected. The teacher made sure we understood that conformity is above all else.

But I'm not in China anymore. As an American, I have a choice. I understand that my single vote is insignificant and isn't likely to make history. But it's significant to my own conviction and conscience. I shouldn't vote for someone because party unity demands it or the fear that Hillary is worse. I won't vote for someone who doesn't represent me. So I will plant myself like a tree besides the river of truth, and tell the whole world, "No . . . you move!"