Keep the General Election in Mind and Give Rubio a Chance

Helen Raleigh
|
Posted: Jan 30, 2016 12:01 AM
Share   Tweet
The opinions expressed by columnists are their own and do not necessarily represent the views of Townhall.com. 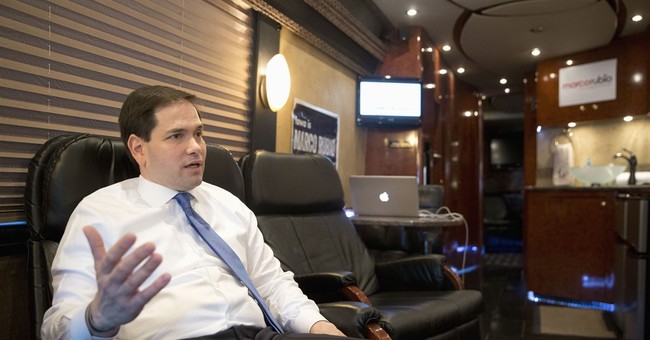 The first primary vote hasn't been cast yet, but many political pundits seem already to have narrowed down the GOP presidential race to Trump vs. Cruz and enough has been said about both.  What about the GOP hopeful from Florida? No, I'm not talking about Jeb. Not many people pay much attention to Jeb's campaign since it has the "dead man walking" kind of feeling to it. I'm referring to the junior Senator from Florida, Marco Rubio.

I met Senator Rubio at last year's Freedom Fest in Las Vegas.  His speech about his parents' immigration stories truly resonated with an immigrant like me. I also noticed many Hispanic hotel staff members stopped what they were doing and eagerly tried to catch a glimpse of him. That says something about his broad appeal.  Senator Rubio has given a variation of that speech many times since. But his central theme remains the same. Not even once has he ever complained about any hardship his parents had to endure. Instead, he always focused on how grateful his family, including himself, is to America.  The fact that a son of a bar tender and a maid rose to be a presidential contender for the most powerful nation on earth is a true testament of what a great nation we are: no one's destiny is pre-determined by social class or a family name. Unlike Ted Cruz's sometimes very mechanic delivery, Rubio's gratitude to America seems heart-felt and genuine.

Rubio also has repeatedly shown he can give a very thoughtful answer while thinking on his feet. Here is one of his best lines from Thursday night debate " One of [Hillary's] first acts as president may very well be to pardon herself." Often when he faces a negative or even potentially lethal question, he doesn't resort to insults and mockery. Instead, he manages to turn his answer into a positive message which balances his own conviction with respect to others. If you don't know what I'm talking about, please watch how he explains religious freedom to an atheist.

Rubio's appeal is more than just being a charismatic speaker. Unlike some other loud mouth candidate who has remained clueless on key policies after so many months into the campaign, Rubio has been getting better at each presidential debate and has demonstrated a thorough grasp of policy issues from national security to foreign policies.

Rubio is not a perfect candidate. I am wary about his economic plan to raise the per-child tax credit in the name of being pro-family. I hope he will quickly catch up on his free market economics to match his knowledge on foreign policy issues. Child tax credit has been a failed economic stimulus idea since its inception. The only pro-family economic plan is less ruinous government regulations, lower taxes and faster economic growth.

Some republicans also don't like Rubio's participation in the "Gang of Eight" immigration reform effort. Like Rubio's child tax credit plan, the "gang of eight" immigration reform proposals double down on failed policies, rather than offering a fundamental shift of thinking. To me, it was a missed opportunity. The GOP congressional leadership has avoided tackling the immigration issue in the last couple of years, which gave the rise to the other presidential candidate, Donald Trump, who built his entire campaign platform on much more radical anti-immigration rhetoric. Now that immigration has even become a divisive issue among Republicans, it's almost impossible to even begin a rational discussion on any immigration reform.  It further damaged Republicans stand with the immigrant voters.

So Rubio is not a perfect candidate. But I'm not looking for a perfect candidate. Our nation has been walking down a wrong path and has experienced a self-inflicted decline for too long. The Republican majority in US Congress seems powerless to turn our nation around. We need a solid Republican to govern from the White House. Poll after poll show Rubio is the only GOP candidate who can beat either Hillary or Bernie during the general election.  To me, Rubio has offered many good qualities to show that if he was elected to be the president of the United States, he has what it takes.

The GOP primary race shouldn't be just about Trump vs. Cruz. Keep the general election in mind and give Rubio a chance.