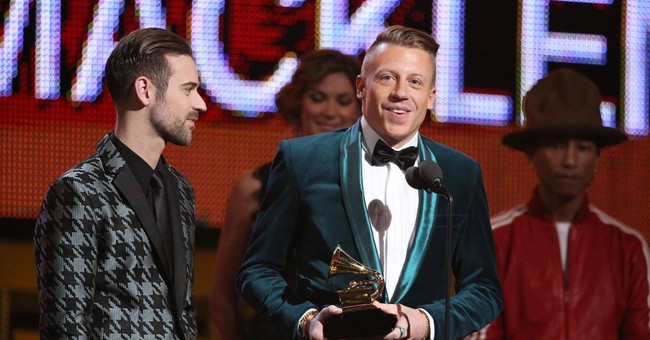 When I got married, the ceremony included our friends and family. That special day was meant to make our covenant public only to those who would value its meaning in our lives. But who is it who dreams of getting married in a mass publicity stunt on an annual television broadcast mostly known for pushing the FCC Indecency Standards to their breaking point? That was exactly what happened to 33 couples (some heterosexual and some homosexual) as they exchanged marriage vows on the 2014 Grammy Awards show. The ceremony was presided over by Queen Latifah and accompanied by a performance of Same Love by Macklemore and Ryan Lewis and later Open Your Heart by Madonna. As a viewer, it was a little difficult to know if the spectacle was supposed to be persuasive or merely exhibitionist.

Whatever was behind the Grammy’s display, Americans are becoming more widely accepting of both homosexual behavior and the redefinition of marriage to include homosexual relationships. This has been due to a relentless, extremely well-funded propaganda campaign by Lesbian, Gay, Bisexual and Transgender (LGBT) activists. And to their credit, they have succeeded in persuading large numbers of Americans that homosexual behavior is—if not normal and healthy—at least harmless and, in some bizarre sense, courageous. The cultural holdouts during this national opinion shift—or national loss of common sense, some might say—have been African Americans. For years, as white opinion grew more and more favorable to the idea of homosexual “marriage,” black opinion on the matter refused to budge. This led first to rage; I have written in the past about the racial epithets hurled at blacks in California in the wake of the passage of Proposition 8, which affirmed the traditional definition of marriage. (These incidents were almost completely ignored by mainstream media, and ironically their victims included black homosexuals who opposed Proposition 8.)

But later the reality of black opposition to the redefinition of marriage led to aggressive propaganda campaigns specifically targeting African Americans. The most successful came from President Obama himself. When he famously “evolved” on the issue of redefining marriage in 2012, black opinion on the matter moved noticeably in the polls. But the victory has not been complete. A 2013 Pew Research Report found that 53% of black men and 44% of black women still oppose same-sex “marriage” (compared to 47% of white men and 40% of white women who oppose it). So it is not surprising that activists have targeted the world of hip hop, and that what many would call mediocre, pedantic song has received a huge amount of attention. Macklemore’s Same Love is by all accounts a heavy-handed admonishment to the hip-hop community to become more accepting of homosexuality. And in a predictable fashion, the rapper—who is white and from a middle class background—also makes it clear that that he thinks disapproving of homosexuality is equivalent to oppressive racism:

A culture [hip hop] from oppression
Yet we don't have acceptance for 'em
Call each other faggots behind the keys of a message board
A word rooted in hate, yet our genre still ignores it
Gay is synonymous with the lesser
It's the same hate that's caused wars from religion
Gender to skin color, the complexion of your pigment
The same fight that led people to walk outs and sit ins
It's human rights for everybody, there is no difference!

Even the New York Times said of Same Love, “It’s an almost messianic song, and a deeply self-serving way to discuss an issue like [homosexual “marriage”] equality.” But of course the song perfectly reflects the message of LGBT activists. Could its saturation with politically correct orthodoxy have anything to do with why Macklemore surprisingly beat out Kendrick Lamar for best rap album of the year? We’ll certainly never know for sure. Thankfully, another rapper, Bizzle, has taken the time to respond graciously to the deeply offensive message of Same Love. A key excerpt:

So, quit comparing the two [race and homosexuality]. It ain’t the same fight
You can play straight. We can never play white
Using black people as pawns for yo’ agenda
And all the sell out rappers will do whatever you tell ‘em

The Hollywood elite, for the most part, is not deeply damaged by the decline of marriage or the darker side of the homosexual lifestyle. They have enough money to get screened and treated for sexually transmitted diseases, to pay for multiple divorces, to fly across the country to see their children from multiple partners and to “love” whomever they choose on a nightly basis with few lasting consequences.

But sadly there are now neighborhoods in America where the only wedding some children will ever see will be on television. Will they watch Queen Latifah, Macklemore and Madonna and conclude that marriage is a sacred life-long bond, regardless of the gender of the partners? Or will they decide that marriage probably doesn’t mean much of anything at all? Be sure those in your sphere of influence understand what is at stake for our children.