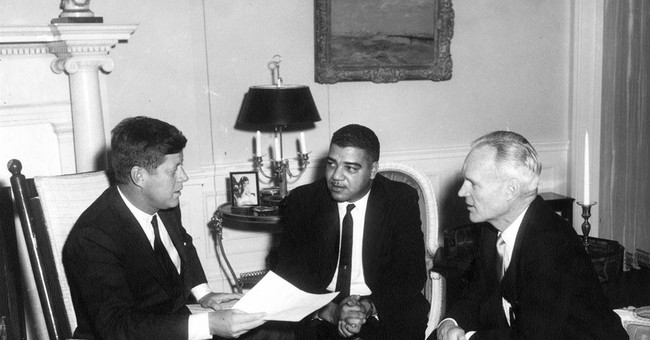 As I was growing up, my father taught me many lessons about the history of African Americans. These were lessons he had learned first-hand in a racially torn South and in a tolerant, but often ignorant North. He taught my brother and I to value the heritage that had helped define our family. He told us of heroes who made a difference.

Fifty years ago, James Chaney, Andrew Goodman and Michael Schwerner were murdered by the Ku Klux Klan in Mississippi. Chaney was an African American from the area, and Goodman and Schwerner were Jewish men from New York City. The young people were part of the Freedom Summer project, working to register African Americans to vote. All three were between the ages of 20 and 24.

Those who remember the sacrifice of these fine young men are hoping that Congress will posthumously award them the Congressional Gold Medal. Such honors have recently been awarded to other Civil Rights martyrs, including the four young victims of the 1963 Klan bombing of an Alabama church.

Unfortunately, in today’s highly polarized political climate, reactions to the anniversaries of such tragedies often veer to one of two extremes. The first uses such evil acts to discredit the idea that there is anything good in the American past. This is nothing new; at the time they occurred, such horrors did much to undermine the moral authority of American leaders both at home and abroad.

Klan murders, along with Bull Conner’s fire hoses, exposed the ugly specter of racial terrorism in the South that had been long hidden from the rest of the country. And it is easy to understand why many who lived through such things, as well as those who read about them in the papers or saw them on television, began to think of the American promise of liberty and justice for all as little more than a joke.

The other extreme reaction often elicited by allusions to these kinds of events is to note that such atrocities are unthinkable today and so conclude that racism no longer exists in any kind of meaningful form. These are the speakers, writers and thinkers who are constantly urging us to “move on,” because there is supposedly nothing more to say or do on the matter.

Unfortunately, both reactions miss the complexity of the tragic and unique history of race in America. It is true that slavery and segregation led to unspeakable atrocities against black Americans, but this does not mean that most black Americans are not also currently blessed with tremendous opportunities. The fact that black Americans have come so far, however, does not negate the fact that there is much work left for us to do.

The real question we should ask is not “does racism still exist?” but rather “how are our efforts best spent moving forward?” The Civil Rights era was a time of striking down unjust laws and challenging all Americans to reexamine their racial attitudes. This led to much needed changes in both areas. But the success achieved then does not necessarily mean that this is the most effective way to move forward now.

When I was diagnosed with esophageal cancer in 2005, I underwent intense chemotherapy and radiation treatment, as well as surgery. This was necessary to save my life. But it would have been a tremendous mistake to continue this treatment into the foreseeable future. The steps I have taken to safeguard my health since that time have been much more lifestyle oriented, ensuring that I am eating well, exercising and visiting my doctor on a regular basis.

As I have written before, it is well known that blacks who graduate from high school, marry before having children and stay married have earning power equal to or greater than whites. Is it possible that we have reached the point in race relations where an interventional approach is becoming counterproductive? Could more efforts to strengthen families and communities and to increase educational and economic opportunity be a more effective approach?

While it is certainly important to remember the brutalities that punctuated our nation’s past, we must also remember that black history is more than just the story of victimization and suffering. Black Americans have, from the very earliest colonial times, made tremendous contributions to our country’s development and have overcome external limitations to improve the lives of their descendants.

The problem with focusing solely on the negative aspects of black history is that it can encourage the perception that opportunities for blacks are so severely limited by racism that it is pointless for them to try. This discourages many young people from making the efforts that will be needed for them to improve their own lives and make things better for their children.

Ultimately, we can choose how we look at black history: is it the story of ongoing victimization or of triumph and redemption? Anniversaries such as these rightly remind us both how far we have come, as well as how far we have yet to go. We must never forget the brutal realities of the past or gloss over them as unimportant. But we can choose not to be paralyzed by them and instead be inspired.