How To Lose An Election 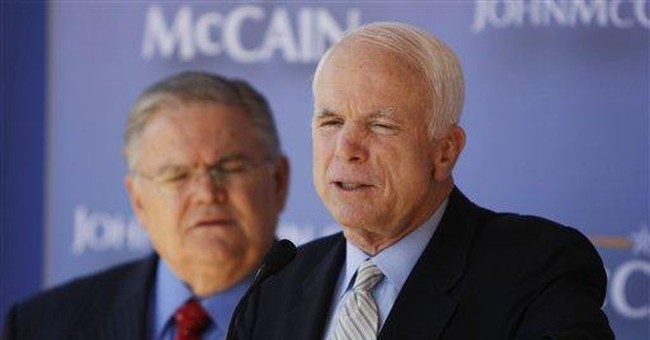 Last week John McCain denounced the work and ministry of two very popular pastors, John Hagee and Rod Parsley. This move may cost him the mainstream evangelical vote. At the very least it will make the Senator suspect to other pastors and millions of unconvinced believers. If the loyal supporters of this spiritual dynamic duo don’t show up at the polls, it alone will make the White House unattainable for the 71-year-old. In other words, the consequences of these rash decisions could be paid at the ballot box this November.

Need proof? Try these statistics on for size.

John Hagee’s last book topped the million unit sales mark (not bad for the San Antonio, Texas "phenom”). Parsley speaks to millions all over the globe through daily television and influences a politically active core group numbering in the hundreds of thousands thorough his Center for Moral Clarity. One could argue that their influence upon the religious right is topped only by James Dobson, Tony Perkins, and Don Wildmon. In addition, neither of these fellows is a “Jeremiah Wright” in terms of influence. They have 10 times the outreach muscle of the Chicago preacher.

While evangelical voters are unlikely to move toward Obama, they may soon decide to sit this national election out. Candidates like McCain who want to please everybody, often over react to polls and pundits. People pleasers or political panderers often seem to be wishy-washy and mercurial. Without a clear set of guiding principles, political opportunists often raise more questions than they answer. They destroy the life and vitality of their own campaigns. I hope I am painting McCain with the wrong brush. He’s the only hope that social conservatives have, but we don’t know if we can trust him.

Although McCain is a seasoned politician, a war hero and a life long public servant, he has committed three unforgettable sins. The sins are:

1.Running from the principles that originally got you elected

2. Siding with your enemies

How has he run from the principles that got him elected Senator?

First of all, he seems to have abandoned family values and social conservative principles. Although he has been pro-life for 25 years, he has muddied the waters by supporting embryonic stem cell research. His stance on immigration has also gotten him into trouble because he forgot his supporters’ concern for nation security and the rule of law. In addition, last week he missed an opportunity to cry out against the outrageous California Supreme Court ruling essentially legalizing gay marriage.

How has he sided with his enemies?

McCain created a compromise group, which thwarted the 2005 GOP campaign for conservative judges. Next, he criticized Samuel Alito as too "conservative." Third, he championed the case for total amnesty for 20 million illegal immigrants. Fourth, he currently opposes drilling in ANWAR (Arctic National Wildlife Refuge). This region holds the largest undiscovered oil reserve in North America. Some believe that recoverable oil would be in the multiple billion barrels not to mention trillions of cubic feet of natural gas. (These numbers are Forbes magazine estimates). Finally, he calls drug companies “crooks” – violating support of business and free enterprise.

How has he alienated his base?

Many folks believe that he has jeopardized free citizen speech (in favor of the media) with the McCain-Feingold Law. Again and again, McCain-Feingold is brought up as an ancient wound that has never been healed. In addition, the current conservative “Bible Gate” promises to fragment the conservative movement if McCain does not listen to someone who understands the evangelical Christian movement.

How can McCain avoid disaster?

He needs to decide to strategically put together a coalition of supporters, which includes both fiscal and social conservatives. The easiest way to reach evangelicals would be to pick a running mate that understands evangelicals. He cannot afford to step on the faith community’s toes or overlook evangelical concerns again. The three best choices are Sam Brownback, Mike Huckabee, or Bobby Jindal. Any of these men could offer a shot of enthusiasm and a secondary focus for the McCain campaign. Brownback is a triple threat to the Democrats as he can draw fiscal conservatives, evangelicals, and Roman Catholics. Mike Huckabee would also truly motivate evangelicals and bring Obama-like excitement to the southern states. Bobby Jindal could reach both fiscal conservatives and a large segment of the evangelical community.

Finally, the Senator needs to set up a national speech in which he, like Mitt Romney and Barack Obama, explains to the nation what makes him tick spiritually. He needs to break his silence about faith and share his testimony about Vietnam, his faith in Christ, and why he feels so awkward talking about religion. Surely, if Hillary Clinton can talk about the power of the Holy Spirit and grace in a national debate, McCain can press through his shyness.

Only a radical course correction can save McCain’s campaign! Can somebody send McCain a telegram or a smoke signal? It seems that e-mails and telephone calls are not getting through.