Harlan Hill
|
Posted: Dec 20, 2018 1:02 PM
Share   Tweet
The opinions expressed by columnists are their own and do not necessarily represent the views of Townhall.com. 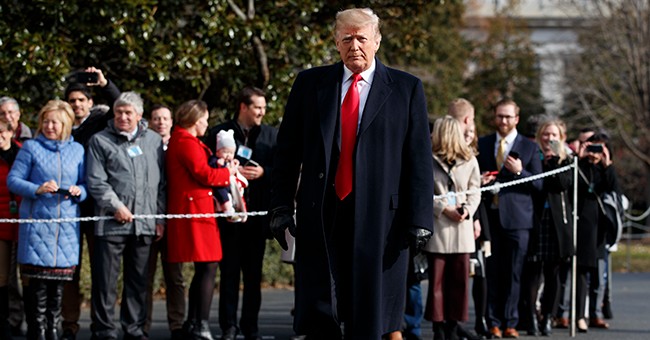 The Democrats aren’t going to get away with holding the federal government hostage to their radical open-borders agenda. Not again.

The Democrats know that they got the Republicans to cave during the previous budget impasse, which produced a bloated $1.3 trillion Omnibus spending bill that didn’t fund construction of the border wall. President Trump reluctantly signed that bill, but he did so with a vow that he would never again put his signature on such a bad piece of legislation.

“As a matter of National Security I've signed the Omnibus Spending Bill. I say to Congress: I will NEVER sign another bill like this again,” the President declared in March. “To prevent this omnibus situation from ever happening again, I'm calling on Congress to give me a line-item veto for all govt spending bills!”

He made his position even more clear in July, pledging to fix the country’s broken immigration system even if it requires a shutdown.

“I don’t care what the political ramifications are, our immigration laws and border security have been a complete and total disaster for decades, and there is no way that the Democrats will allow it to be fixed without a Government Shutdown,” he tweeted. “Border Security is National Security, and National Security is the long-term viability of our Country. A Government Shutdown is a very small price to pay for a safe and Prosperous America!”

Prior to the last budget impasse, President Trump offered congressional Democrats a surprisingly generous deal, offering to accept legal status for nearly a million DACA recipients in exchange for funding of the border wall. True to form, though, the obstructionist Democrats rejected the President’s good-faith overture, even though the $5 billion he requested for the wall would have accounted for less than 0.004 percent of the amount Congress ended up appropriating.

Now, with a partial government shutdown looming if a deal to fund seven government agencies can’t be concluded by December 21, President Trump has a perfect opportunity to follow through on his pledge while finally getting the border wall funding he has sought since the beginning of his presidency.

Senate Democrats insist that they will not accept more than $1.6 billion for border security, and they’re threatening to punish the Department of Homeland Security (DHS), which includes Immigration and Customs Enforcement (ICE), if the President doesn’t capitulate.

In order to get their way, the Democrats will do everything in their power to portray a potential partial government shutdown as a national catastrophe, but that’s just more fearmongering intended to manipulate the public and the press.

In reality, about two-thirds of the federal government is already funded through a budget deal reached earlier in the year, so a partial shutdown would not affect most federal employees, including those serving in the armed forces. In fact, it’s entirely possible that the showdown will only involve DHS funding because of the political drama over immigration, since Congress could fund the other six agencies separately.

Even if DHS were temporarily left without funding, though, it would not materially impact border security, because Border Patrol and ICE agents would almost certainly still be required to report for work. They would not be able to receive paychecks until a funding deal could be reached, but history shows that this would only be a temporary problem, since Congress has always appropriated back pay for employees affected by previous shutdowns.

The Democrats are a party of con artists and fear mongers, but President Trump is no fool. He knows that a border wall is essential to our national security, and he’s not going to give up on that urgent priority in the interest of political expediency.

Harlan Hill is a political advisor, media commentator, and an advisory board member of the Donald J. Trump for President, Inc.