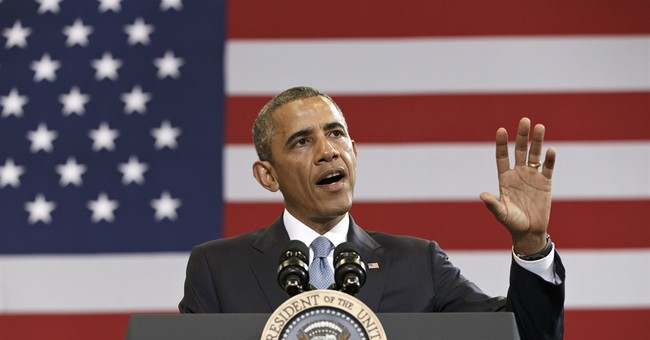 When it comes to defending Obamacare subsidies, the Justice Department appears none too eager to take its case to the Supreme Court. Instead, the administration announced it would appeal Tuesday’s adverse ruling by a three-judge panel of the D.C. Circuit Court of Appeals to… the full D.C. Circuit Court of Appeals. President Obama, it seems, likes his chances with the full court. And why not? He “hand-packed” it himself.

The legal issue at hand is whether the IRS has the authority to subsidize health coverage bought through insurance exchanges run by the feds. It’s a huge question, because the feds run the Obamacare exchanges in most (27) states. Nine other states “partner” with Washington in operating their exchanges.

On Tuesday, two federal appellate courts ruled in two separate cases challenging subsidies for customers of the federally-run exchanges. The courts reached completely opposite conclusions. In Halbig v. Burwell, a three-judge panel of the D.C. Circuit said the IRS-approved subsidies violated the plain meaning of the law. Meanwhile, a three-judge panel of the Fourth Circuit concluded in King v. Burwell that the text was susceptible to multiple interpretations, so the IRS had the power to authorize such subsidies.

In fact, the statute unambiguously restricts subsidies to “insurance purchased on Exchanges established by the State.” But when more than half the states chose not to establish exchanges, the IRS effectively amended the statute with its expansive “interpretation.”

The subsidies at issue run to hundreds of billions of dollars and are critical to the implementation of Obamacare. Given the high stakes and the completely contradictory court rulings, the standard practice would be to fast-track the cases straight to the Supreme Court.

Why, then, is the administration seeking review before the full D.C. Circuit? After all, it was the D.C. Circuit that invalidated part of the administration-backed Dodd-Frank law, overturned a burdensome EPA rule regulating cross-state power-plant emissions, and ruled that President Obama’s sham “recess” appointments to the NLRB were unconstitutional.

But that was the old D.C. Circuit. Since then, President Obama has successfully packed the court with judges of his choosing.

The administration was able to change the makeup of the D.C. Circuit after Senate Majority Leader Harry Reid (D-Nev.) broke the rules of the Senate to change the rules and eliminate the filibuster for judicial nominees. As a result, Reid was able to push through three new judges for the D.C. Circuit: Nina Pillard, Patricia Millet, and Robert Wilkins. Senate Republicans opposed all three nominees as being far outside of the legal mainstream and because they were not needed – the D.C. Circuit has one of the lowest caseloads in the country.

Pillard, a former Georgetown University law professor, once suggested that abstinence-only sex education may be unconstitutional. Wilkins, a former public defender and partner at the Venable law firm, held that voter ID laws are discriminatory when he was a district court judge. Millet, a former partner at Akin Gump, obscured her legal views at a Senate confirmation hearing when she said she had no “familiarity with any particular judicial philosophies the justices [of the Supreme Court] might possess,” and that she had no particular “judicial philosophy” of her own—quite an odd statement from someone who argued 32 cases before the Supreme Court.

Yet as a result of Reid’s rule-change, these three nominees got lifetime appointments to the D.C. Circuit, which now boasts seven active judges appointed by Democrats and only four appointed by Republicans. The president appears to be banking on the new judges feeling obligated to pay the piper.

We should not assume that judges decide cases based on the political ideology of the President who nominated them, rather than on the law and facts before them. But all too often, judges are considered politicians by another name, and President Obama had a reason for picking these particular individuals for this particular court at this particular time. The decision to slow-walk the Halbig case by asking for an en banc review rather than appealing directly to the Supreme Court certainly gives credence to any suspicions that the new D.C. Circuit was constituted to rubberstamp the Obama administration’s policies.

Getting an en banc decision that overturns the three-judge D.C. Circuit panel would be advantageous to the administration because it would remove the conflict with the Fourth Circuit’s opinion in the King case. This would decrease the probability of the Supreme Court agreeing to review the cases, because one of the crucial factors the Supremes consider in deciding whether to take a case is if there is a conflict among the courts of appeal.

The administration may also prefer to keep this case out of the spotlight until after the upcoming election. If it went directly to the Supreme Court, there’s a chance the justices might decide to take the case at the Court’s “megaconference” in late September.

If the full D.C. Circuit rehears the case, the judges would do well to heed the panel’s admonition in Halbig: “Congress is supreme in matters of policy, and the consequence of that supremacy is that our duty when interpreting a statute is to ascertain the meaning of the words of the statute duly enacted through the formal legislative process.”

The power to create law lies with neither unelected judges nor the executive branch. But the IRS did precisely that when it “interpreted” the subsidies provision of Obamacare to mean something quite different from the plain language of the statute.

But if the full D.C. Circuit does overturn this decision, then President Obama and Senator Reid will get exactly what they wanted when they maneuvered to pack the court with three judges that they hoped would advance their ideology, their politics, and their view of the unlimited and unrestricted power of the current executive.