Hank Adler
|
Posted: Jul 30, 2018 11:30 AM
Share   Tweet
The opinions expressed by columnists are their own and do not necessarily represent the views of Townhall.com. 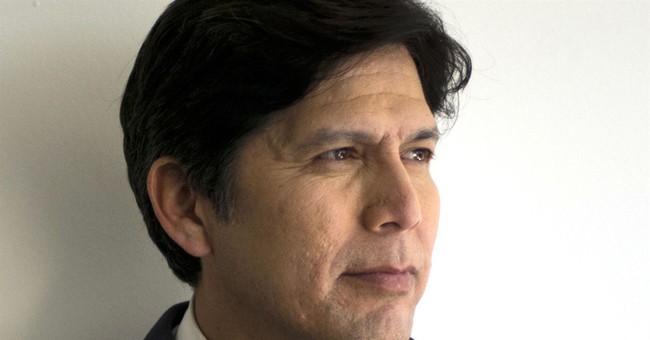 The California Legislature continues to move forward with Kevin de Leon’s SB 227 that would re-define required California taxes as tax deductible contributions for federal income tax purposes. With all due respect to some brilliant university professors, the greatest similarity between this plan and some of the worst tax shelter plans of the 1990s is that SB 227 will exclusively help only the wealthiest taxpayers. The greatest dis-similarity to tax shelter plans of the 1990s is that California taxpayers who take advantage of SB 227 will have no defendant to sue for unsuccessful tax advice.

The Tax Cuts and Jobs Act limited the deduction of state taxes to $10,000 for all taxpayers and therefore balanced the playing field. Instead of acknowledging that this created equal treatment under federal tax law for taxpayers in different states, politicians of high tax states portrayed this to be an attack on their states. California Governor Jerry Brown went as far as to call this a “war on California” by the president.

Enter Kevin De Leon, the President pro Tempore of the California State Senate and candidate against Senator Feinstein in the current California Senate race for 2018. Mr. De Leon fashioned a change in California tax law that would effectively restore the unequal treatment of taxpayers from different states under prior law. SB 227 would only help wealthy California taxpayers. Note that based upon other comments by Nancy Pelosi and Democratic leadership throughout the country discussing the Tax Cuts and Jobs Act, providing additional tax benefits to the wealthy is unpatriotic.

Thus far unaddressed by the California legislature with respect to SB 227 is California’s Proposition 98. Proposition 98 is very complicated, but essentially allocates 60% of California general revenues to state business and 40% to California schools. This formula will not work with SB 227’s “voluntary contributions” not being a part of general revenues as would appear required under government accounting standards. The state’s non-educational funds could collapse. As a result, Proposition 98’s mandated formula would destroy the state budget if significant numbers of wealthy California taxpayers took advantage of SB 227.

And, of course, there will be the IRS audits on every California taxpayer who claims their California taxes as contributions. The IRS will issue a Revenue Ruling providing that taking a required tax payment as a contribution deduction is negligence and subject taxpayers to negligence penalties. In the IRS dictionary, the IRS might replace the definition of tax evasion with a picture of de Leon.

The IRS computers will easily be programmed to require full audits for taxpayers who deduct these “voluntary” SB 227 payments as contributions. As a result, ANY aggressive positions in those tax returns will be challenged, not just that single deduction. Even the disclosure of the position in the tax returns will not keep the IRS from arguing for negligence quoting Shakespeare’s “rose by any other name” and pointing to their new revenue ruling.

Add to the above problems will be finding a CPA to prepare and sign a tax return including a deduction for these “voluntary” contributions. CPAs could face significant financial penalties and other challenges from the Internal Revenue Service.

If for some reason California’s wealthy taxpayers are bold enough to take the “voluntary” contributions as tax deductions, California’s CPAs are bold enough to sign the tax returns and these taxpayers are successful in defending their tax returns in a court room ($$$), it is a zero-sum game. Whatever taxes are lost by the federal government will be paid by raising income taxes on all taxpayers or increasing the deficit. And California’s Proposition 98 to protect public schools will be gutted as the result of mere math.

Maybe it should not be a surprise, but SB 227 has the appearance of the so-called progressive California legislature solely doing the bidding of California’s richest taxpayers.