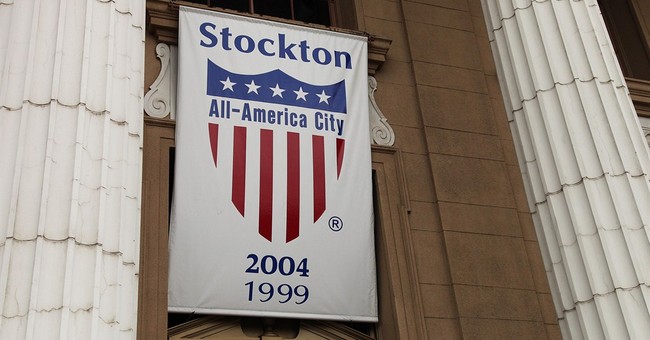 U.S. Bankruptcy Judge Christopher Klein is having his Andy Warhol moment. Were it not for ISIS and the Ebola virus, all we would be hearing about on these pages and on FoxNews is Judge Klein's ruling in Stockton, California. In a case likely to be heard before the Supreme Court of the United States, if Judge Klein's ruling is confirmed and employee pensions are not sacrosanct in City and State bankruptcies, many cities in California that are insolvent today because of long term bad decision making will bite the bullet and declare bankruptcy. When these cities exit bankruptcy, they will be able to focus on representing their citizens and providing effective city services at appropriate levels rather than the levels in place because of fiscal issues threatening these cities.

Municipal bankruptcies would result in cities becoming more efficient and perhaps representing their voters more ably and more responsibly. In the process, current municipal pension holders will be sadly harmed, but the result will be that future municipal employees will become watchdogs against profligate spending.

What happened in Stockton? The City of Stockton determined that bad times would never come and built a new City Hall as well as other 'necessary' city properties including a sports arena. Stockton also paid more than competitive wages and promised unusually rich pensions and other wonderful lifetime perquisites to its employees. The political process was 'just the political process' and future liabilities were not adequately considered although there were likely rosy financial projections provided by City employees and well paid outside consultants. And then the dreaded tomorrow came and the ice cream cone melted. The City of Stockton could not pay its obligations.

Like every other financial nightmare, be it a business, a professional athlete with no understanding that his/her career is shorter than those great first year earnings, or just an irresponsible or unlucky citizen, there are going to be financial victims in any bankruptcy. Such is Stockton. The bondholders want to be paid, the pensioners want to be paid, the current employees want to be paid etc. etc. etc. What the bankruptcy judge is saying is that everyone, not just the vendors and bondholders, will need to take a haircut.

Obviously, there is some pain going to be felt by the current and former employees. The same thing happens in the private sector. Unfortunate, but that is the way it is sometimes.

The long term impacts of employees and their pensions being hurt by a municipal bankruptcy is that their unions as well as senior city executives will now have a reason prospectively to suggest to their elected bosses that they demonstrate fiscal frugality. When one's own personal wealth is not going to be impacted by a stupid decision by a local politician, it is a 'who really cares' if an idiot mayor and the city council put the city into bankruptcy. That changes when it becomes a WIFM = What is in it for me?

The California Angels are negotiating with the City of Anaheim regarding their desire for the City to give up tens of millions of dollars worth of Anaheim land to keep the Angels in town, rather than moving to a new city. It is so easy for the City Council, who will be gone in ten years, to give up anything to keep the Angels in Anaheim. For elected officials, by the time the City needs the money from the land, they will all be long gone. If giving up the land might impact city pensions and salaries in the future, the discussion might actually consider a look at the long term impacts of such a decision if the unions weigh in with the WIFM question. The same would hold true for the city where the Angels want to move.

If municipal unions and their constituents are forced to pay attention to bad long term financial decisions by city councils, everyone wins. Plaudits to Judge Klein. It is a shame that the former and current employees of Stockton are going to pay the price, but the long term impacts could be terrific.