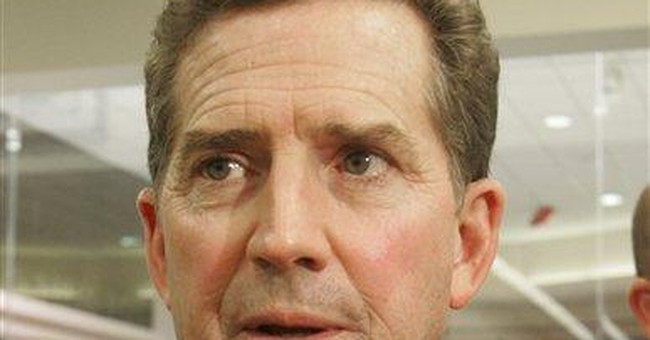 Senators Jim DeMint (R-SC) and Tom Coburn (R-OK) discussed Senate Republicans’ scheduled vote on a two-year earmarks moratorium during a Heritage Foundation press call this afternoon. The call took place just minutes before Republican Leader Sen. Mitch McConnell announced his support for the measure -- a significant about-face. The conservative Senators had expressed hopeful optimism that the secret ballot decision, which will take place on Tuesday, will adopt Sen. DeMint’s controversial proposal. They cited recent polling data that they argue clearly demonstrates voters’ opposition to a practice deemed to be “wrong and wasteful.”

McConnell, citing the will of voters, agreed: “I am announcing that I will join the Republican Leadership in the House in support of a moratorium on earmarks in the 112th Congress,” he said in a prepared statement. “Banning earmarks is another small but important symbolic step we can take to show that we’re serious, another step on the way to serious and sustained cuts in spending and to the debt. Republican Leaders in the House and Senate are now united on this issue, united in hearing what the voters have been telling us for two years — and acting on it.”

Senate Republican leadership’s reversal all but guarantees easy passage of the DeMint proposal, which has already been embraced by the House GOP. It also marks an early triumph of Tea Party activists and fiscal conservatives, who had demanded that Republicans take this large, albeit mostly symbolic, step to curb federal spending. DeMint has since applauded McConnell’s move, calling it an example of “bold leadership.”

During the conference call, DeMint explained why the ban is important. “There are Congressmen and Senators who believe it’s their job to bring home federal bacon,” he said, warning that if Republicans continue to endorse the process, voters would be justified in doubting whether the party truly “believes in limited government.” In a remark that would prove prescient, DeMint hinted, “I don’t think there’s nearly the division in our conference that some have suggested.”

The conservative duo dismissed arguments advanced in recent days by some fellow Republicans that earmarking is a relatively insignificant issue, and that the GOP shouldn’t cede all the ground on specific directing of appropriations to Democrats and the White House. “Earmarks are the cause of bigger problems,” DeMint explained. “They keep members' eyes off the ball of major reforms. [Rejecting] earmarks is a way for us to show that we've gotten the message, and that we’re committed to stop focusing on parochial and special interests. It's not our job to be directing money back to local projects that don’t have national significance," he said. It now appears that GOP brass has adopted a similar stance.

“Our country is facing the greatest difficulty of my lifetime,” Coburn said. “For us to defend a process that takes the focus off the important issues is an untenable position. It violates our oath, which says we must do what's in the best interests of the nation, not what’s in the best interest of individual members’ political careers.” He added that maintaining the status quo on earmarks would engender “greater cynicism” among the American people “at a time when they need encouragement.” A source in McConnell’s office agreed, saying that the GOP leader’s announcement would “help bring folks on our side together.”

Prior to the McConnell development, DeMint predicted that his proposal would narrowly pass. Based on his own informal whip count, DeMint said he believed his faction would have the votes to adopt the moratorium. “I think we have the edge by a vote or two,” he said. After McConnell’s chess move, those calculations are now moot, as the conference’s adoption of the moratorium is a fait accompli.

McConnell’s decision also sidestepped a number of potentially thorny issues brewing within his caucus. Senator-elect Mike Lee of Utah was pushing a public vote on the matter, and the DeMint/Coburn duo was preparing to force an open, Senate-wide vote on earmarks by attaching it to a food safety bill on Wednesday. The Party’s official change of heart effectively neutralizes both possibilities. United Senate Republicans now plan to pressure Democratic colleagues to endorse their position; a choice that could prove complicated for a handful of Senators widely viewed to be vulnerable in 2012.