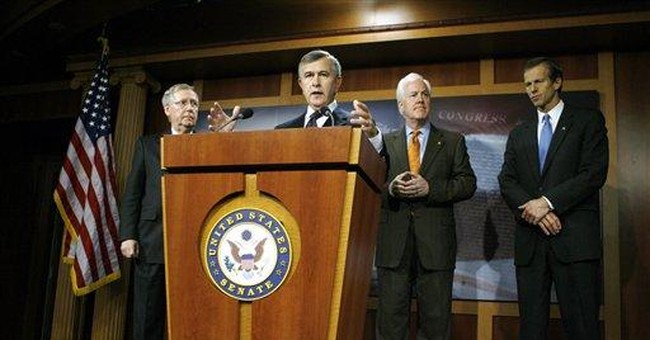 Senate Democrats on Tuesday defeated an amendment offered by Sen. Mike Johanns (R-Neb.) that would have rescinded a provision of the recently-passed health care legislation that Johanns contends will cripple American businesses and stifle job growth. Speaking at an event hosted by Obamacare Watch at the National Press Club, Johanns slammed Section 9006 of the mammoth bill, which requires a "2,000 percent increase" in mandatory filings of 1099 tax forms for businesses, charities, state and local governments, and even churches. Johanns said Democrats stealthily slipped the onerous new requirements into the bill as an added source of revenue to help foot the overall legislation's multi-trillion dollar price tag, and did not consider the effect it would have on businesses across the country.

As the current law stands, starting in 2012, all organizations will be mandated to issue 1099 tax forms not only to contracted workers, but to any other group or business from which they purchase at least $600 worth of goods or services in a given year. They'll also be required to send a copy of each 1099 document to the IRS. Johanns called the entire process "punishing" to businesses and cited a July report from the IRS' independent taxpayer watchdog arm warning that Section 9006 "may impose significant burdens" that it labeled "disproportionate" and perhaps unenforceable.

Republicans have long been critical of the provision, but now even many Congressional Democrats and the White House are conceding that the entire section should be tossed out over concerns that the byzantine logistical mess it creates isn't worth the roughly $17 billion in revenue it was originally designed to raise. Democrats' apparent reversal introduced the thorny question of how to replace the "pay-for." Johanns' amendment called for tapping into the overall bill's prevention funding, as well as delaying the individual mandate, to accomplish the goal, but unsatisfied Democrats voted the plan down. Also scuttled was a proposal by Sen. Bill Nelson (D-Fla.), which would have raised the minimum annual threshold for 1099 requirements from $600 to $5000, and would have exempted businesses with 24 or fewer employees.

Republicans countered that Nelson's plan would discourage hiring (why hire a 25th employee if you're automatically rewarded with mountains of new paperwork?), and would still prove burdensome, even with a higher dollar trigger. Johanns said he's "open to other pay-fors" including an 11th hour suggestion from Sen. Mark Begich (D-AK) to patch the $17 Billion hole using unspent stimulus funds. "[Begich] put forward his idea way to late today, but I could get behind it," Johanns said.

Johanns was especially critical of the White House's role in torpedoing his amendment. Yesterday afternoon, he told Townhall.com that the president's stated support for repealing Section 9006 was a bluff. "The White House is panicking. They know it's a disaster, and they wanted to send a signal that they'd cede ground knowing full well my amendment and [Nelson's] wouldn't pass," he said. "The real story here is that they were willing to sacrifice good policy and our job creation plan to protect their original health care bill." He called Democrats' nay vote a "loyalty vote," demanded by the White House, but said he believes Democratic opposition to his amendment is unstable and could still crumble.

With all of the talk about Republicans being the "party of no" in Washington this year, Johanns also said he found it ironic that Democrats were rejecting a proposal they themselves admit is necessary. "Republicans are standing up for how people really feel in this country," he said. "Today we stood up for small businesses and job creation. And [Democrats] said no."