Gregory Rummo
|
Posted: Oct 25, 2020 12:01 AM
Share   Tweet
The opinions expressed by columnists are their own and do not necessarily represent the views of Townhall.com. 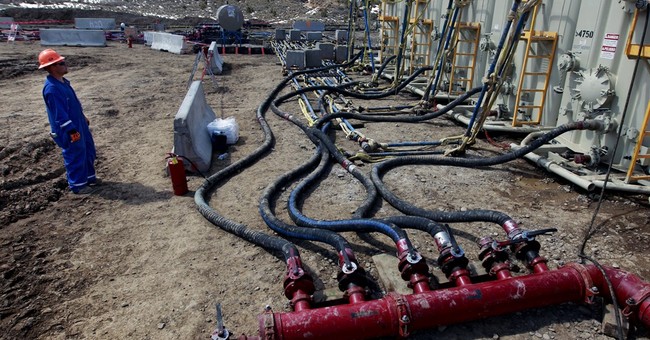 Fracking has become public enemy No. 1 in Democrat circles. It continues to be characterized as a “dangerous, new extraction technology.”

The spread of such misinformation in part fuels fears about hydraulic fracturing -- the real name of what is a decades-old practice in the petroleum industry to increase the yield in oil and gas wells.

Much like driving a wedge into a log, hydraulic fracturing involves pumping a gelled suspension of sand, sintered bauxite or some other proppant under pressure into an oil or gas well. The pressure generated by the pumping forces the fracturing fluid into the cracks and crevasses in a petroleum-rich formation increasing a well’s yield.

The fracturing fluid – really a gel - ultimately breaks and is pumped back to the surface leaving the proppant behind to maintain open the newly formed fissures.

During the oil boom in the 1980s, when almost every farm in Texas and Oklahoma had an oil well on its land, I was working with a team of chemists in the laboratories of Dynamit Nobel of America. We developed and patented a technology to delay the gelling of hydraulic fracturing fluids that allowed them to be pumped into the ground with less friction.

What I learned was that the fears over fracking “injecting dangerous chemicals” into the ground were unfounded.

Ponder the irony: A reservoir of naturally occurring petroleum is on its face, a cavern filled with dangerous chemicals, consisting largely of a “flammable mixture of hydrocarbons and other organic compounds.”

In contrast, the three main constituents of a fracturing fluid are water, an inert proppant and some form of guar gum, a common thickener used in many foods including ice cream to improve mouth feel.

The results of a published study in the Aug. 13, 2014 issue of Chemical and Engineering News concluded that “[the] chemical additives typically make up only about 0.5% of the fracking fluid, which is mostly water and sand… [F]ew of the roughly 90 commonly used compounds are toxic to people.”

It is no wonder that a 2016 EPA report on the potential for contamination of drinking water by hydraulic fracturing was inconclusive.

While there is risk in the adoption of any technology on a large scale – planes crash and kill people as do automobiles – we still drive and fly.

The trade off to any perceived risk with fracking – real or otherwise – is that in 2019, America became energy independent for the first time since 1957.

As misguided environmentalists clamor for an end to fracking, American Exceptionalism pushes ahead with technology that has made modern automobile engines more fuel efficient. And despite pulling out of the Paris Climate Agreement, we continue to lead the way with the largest carbon footprint reduction of any developed nation in the world.

That’s great for all of us.

Share this on Facebook
Tweet
'This Is Scary': Twitter Announces New Policy About Sharing Images, Videos
Leah Barkoukis
Why Some Are Crying Foul Over the Sentence Antifa Activist Received After Attack on GOP Senator's Office
Leah Barkoukis
Mayo Monkeys? There Were Full-Blown Calls for White Genocide on Twitter Yesterday
Matt Vespa
Against Panic: Slow the Spread of Fear Over Omicron Variant
Guy Benson