American Airpower and US Interests in Ukraine

Gregory Moore
|
Posted: Dec 28, 2021 10:03 AM
Share   Tweet
The opinions expressed by columnists are their own and do not necessarily represent the views of Townhall.com. 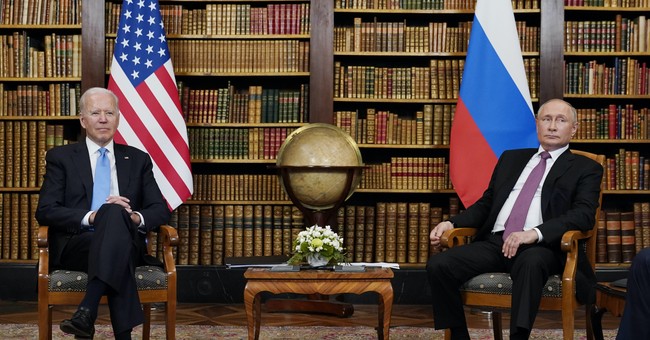 The Russians currently have more than 100,000 troops massed on the Ukrainian border, with more military personnel and equipment being added regularly.   America has an interest in deterring Russian aggression and defending a young, however imperfect, democracy in Ukraine.   Thus far President Biden’s stand on Ukraine has not been impressive.

The US committed American lives to NATO efforts to address Serbian misdeeds in the former Yugoslavia in 1999 - a possible Russian invasion of Ukraine would be no less important for American interests and those of our European allies.   While the American public would not support US boots on the ground, the US should be willing to commit its airpower to stand up to Russian imperialism should it show its face in democratic Europe, telling Vladimir Putin directly that should his forces cross the Ukrainian border he will meet a strong and immediate response from the full might of US airpower.  In consultation with Ukraine and European allies, this would be a powerful deterrent and just might prevent a Russian invasion of Ukraine.

Why is it in America’s interests to offer its airpower over the Ukraine-Russia conflict at the present time?  There are at least three reasons.  First, perceived weakness invites further aggression.  Naked, brazen, Russian military invasion of any country in Europe is not acceptable and might lead Putin to conclude that Western powers will do nothing if he invades other countries, such as the Baltic states.

Second, simply threatening further economic sanctions in the face of cross-border imperialism is not fit for purpose, is not proportional.  Blatant cross-border aggression, such as that being threatened at present, can only be deterred by similarly robust military power.

Third, America has an interest in the preservation and expansion of democracy in the world.  Democratic peace theory posits that democracies do not go to war with other democracies, that the spread of democracy worldwide is correlated with a lower incidence of cross-border wars of aggression.  Today’s Russia is decidedly anti-democratic and any Russian attempt to snuff out the light of democracy in a neighboring country must be pushed back against with vigor.

One more important point should be made here.  The US cannot guarantee non-admission of any state to NATO as the US was told it should do by President Putin in his recent phone call with President Biden.  This is true for two reasons.

First, NATO does not belong to the United States, but is one of 30 member states.   The US alone cannot make decisions on behalf of the other 29 members.

Second, how could anyone blame any state for wanting to join a club that guarantees greater security?  If Ukraine wants in and NATO members are comfortable with the terms of admission, Ukraine is in.  Period.   Moscow’s own historical and contemporary belligerence is chiefly to blame for the post-Cold War rush of Eastern European states to join NATO.

While there is truth that Western leaders told Soviet leaders near the end of the Cold War that the West would not allow NATO to expand eastward, they were not able to keep their promises on that issue.  This should not be allowed to block Eastern European states from joining NATO if they see it as in their interests.  From the West’s perspective it was Russia who in 2014 violated its assurances to Ukraine as it was understood in the 1994 Budapest Memorandum when Ukraine, Belarus and Kazakhstan were assured security after giving up their nuclear weapons.  Ukraine was at the time the world’s third largest nuclear power, so its concessions were no small matter.

In Munich in 1938, the world learned what a failure to confront aggression could lead to.  The West’s failure to take Hitler seriously, it’s failure to put its power on the line to deter German aggression in the end led not to a satisfied, pacified Hitler, but to a yet more aggressive, more confident Hitler, which led to a larger war that cost millions of lives.  While Putin is not Hitler, a failure to take Putin’s possible ambitions seriously, a failure to communicate clearly that Russian aggression in Europe is unacceptable and will be met with force (not just sanctions), will likely lead to more bloodshed and political outcomes that are not palatable to Europeans or Americans.

The time to deter Russia is now, before it is too late.  Further sanctions are not likely to deter Russia.  The United States (and European allies if they agree) must be willing to put Moscow on notice that any invasion of Ukraine by Moscow will be met with the full force of American airpower, still the most powerful air war machine on earth.