Gil Gutknecht
|
Posted: Feb 14, 2021 12:01 AM
Share   Tweet
The opinions expressed by columnists are their own and do not necessarily represent the views of Townhall.com. 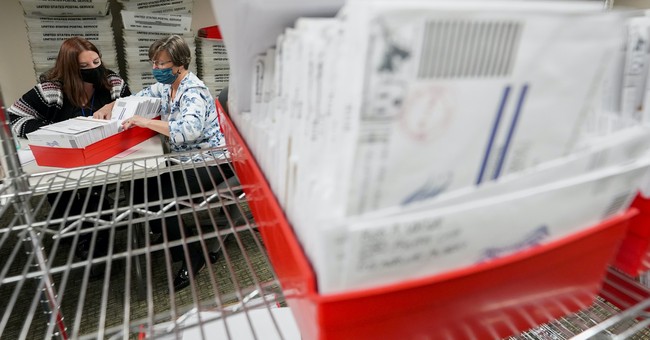 Arguably the greatest accomplishment of the Republican-controlled Senate during the Trump era was the confirmation of hundreds of constitutional conservative judges. The elevation of Amy Coney Barrett to the Supreme Court was the final dagger into legions of bleeding hearts. The Left knew then that their Super Bowl was over. They lost. And they might not get back there again for at least generation.

For decades the Left used the courts to advance agenda items that they knew could never garner enough support to be enacted by legislatures. They court-shopped for friendly judges. Pipeline and power plant construction were tied up in court for years in disputes over seemingly innocuous issues. Radical environmentalists and other liberal interest groups had no greater friends than certain federal judges.

Legendary Packer football coach Vince Lombardi observed that there are only three kinds of people in this world. Those who make it happen. Those who watch it happen. And those who ask, what happened? For too long we have found ourselves in that last group.

It’s time to go on offense and move into that first group. Just like in football, we are either on offense or we are on defense.

The Democrats have a weak quarterback and predictable game plan. They tried to stymie much of the Trump agenda with frivolous suits. Let’s blitz Biden with multiple suits and appeals. Challenge his executive orders on every front. The Left has never cared about the strength or even the constitutionality of their legal arguments (witness the impeachment farce). For them it’s classic stump water politics. Throw what’s handy. Stress what sticks.

We were promised that these new judges and justices were made of the right stuff. It’s time we put those promises to the test.

There are multiple opportunities to get evidence and new election data in front of courts. Mike Lindell has exposed evidence and identified several expert witnesses. We are not likely to get the election overturned. But, we should be able to expose wrongdoing and finally hold election officials accountable. Maybe we can get a ruling on whether Mr. Zuckerberg’s massive cash and in-kind contributions were intended to influence the election? More important, these challenges could serve to force a larger debate on needed election reforms like voter ID.

Imagine a team of aggressive lawyers becoming specialists and finally getting fair compensation for the millions of young women who have suffered permanent mental and physical damages at the hands of abortionists. Threats of lawsuits were a major reason why many small town doctors quit delivering babies. A salvo of million-dollar lawsuits might give pause to those who butcher the unborn.

And why haven’t we seen more class-action lawsuits filed against the social media oligarchs? How hard can it be to argue that Section 230 was never intended to allow them to abuse and abrogate basic rights of free speech. If necessary, call on the authors of the legislation to clarify their intent. Section 230 should be struck down by the courts.

Universities are slow-moving targets. Perhaps some of these new conservative judges would welcome an opportunity to review collegiate diversity programs. Do these bastions of free thought foster diversity of thought, especially conservative thought? Are right-minded professors systematically silenced? Shouldn’t conservative students abused and browbeaten by Leftist professors be entitled to generous financial judgements? Maybe courts could impose quotas on faculty makeups to make them look more like America?

It’s worth a shot.

Finally, local school boards have been bullied by the Left for decades. They’ve been quick to wave the white flag whenever threatened with legal actions. It’s time to make clear that the road to court is a two way street. Let them defend under oath some of their indefensible curriculum decisions.

Some may worry that we might lose in court, like we aren’t aren’t losing now? What do we have to lose? Donald Trump left us a powerful legacy in the federal courts. Forcing reforms, advancing a populist conservative agenda and laying the groundwork for fairer elections in the future doesn’t require “take’n it to the streets.” It may be more effective to simply “take’m to court.”