Gil Gutknecht
|
Posted: Sep 09, 2018 12:01 AM
Share   Tweet
The opinions expressed by columnists are their own and do not necessarily represent the views of Townhall.com. 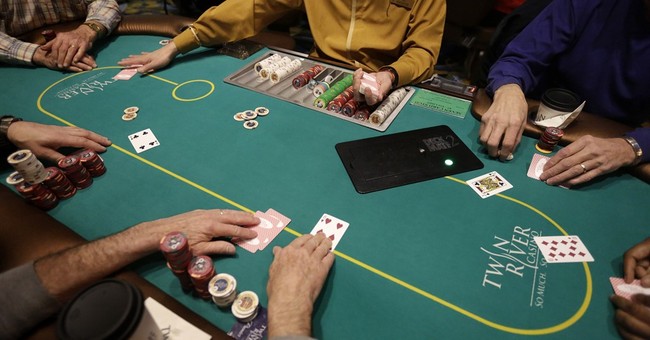 At long last, Special Counsel Mueller blinked. He sent a letter to President Trump’s lawyers this week saying that yes, he would accept written answers to certain questions that he wants to ask the President. The Trump legal team has been coy, but they must know that the game is about over.

Mueller tacitly admitted what Trump and his legal team already knew. He has been bluffing.

He has (at best) a pair of deuces while Mueller knows that the President is sitting with a full house. Sooner or later, they have to lay down their cards. Pretending and playing Go Fish may work in a friendly game with your buddies in the biased media. It doesn’t work in a high stakes game on the Trump Poker Tour.

The Go Fishing expedition has produced nothing linking Team Trump and Russian Collusion. Because there was never anything there to find. It is mind bending to see the extraordinary lengths that the Mueller band of partisans have gone to in their quest to find a crime, any crime that they could pin on our duly elected President.

Granted, not reporting income or paying your taxes are serious offenses. But, charging a distinguished military leader with lying to the FBI even when the very people who conducted the interviews believed that he told the truth? Breaking into domiciles with loaded guns in the middle of the night, ransacking homes and offices, bringing charges, some of which were previously deemed unworthy of prosecution by the Justice Department. None of which involve supposed Russian Collusion. Trampling on the attorney-client privilege? Getting Trump’s attorney to plead guilty to a campaign finance charge that may not even be a real crime?

This is Banana Republic stuff!

Charging a dozen Russians with tampering with our elections, fully expecting that they would never appear in court? One of them shocked Mueller by sending an attorney to demand that Mueller show his cards. Rather than embarrass themselves, they asked for a delay.

All of this in a corrupt attempt to squeeze people to get them to “sing or compose”, as the old judge correctly observed.

Out West, people who bluffed and couldn’t be trusted were called Four Flushers.

Mueller long ago gave up on Russian Collusion, the original excuse for the appointment. Turning normal procedures on their heads, they shamefully morphed into an investigation looking for a crime. Their hopes for obstruction of justice were crushed by the IG report. The one that all but said Comey and Strzok should have been fired for lying, leaking and other stunts that violated department policies.

Maybe, just maybe they could get someone to flip. But, anyone that might flip would also then be guilty of either lying to the FBI or lying under oath to Congress. As democrat lawyer Lanny Davis quickly realized. Doing what may have been the fastest “my bad” in history, leaving CNN with egg on its face.

So team Mueller is down to trying trick the President into a perjury trap. The Trump lawyers haven’t always seemed too quick on the uptake, but they weren’t that stupid. Written responses all but closes that door.

Mueller can now either weave together his report with conjecture and innuendo or he can keep the investigation going. But, he should know that the guy across the table (the one with the full house) is about to start playing some of his cards. Those cards are going to devastate the people Mueller has been bending over backwards to protect and they will destroy the premise for his investigation in the first place.

Trump may not turn over all his cards at once. He could play them one at a time. Pulling the teeth slowly for dramatic effect. His ultimate Trump card is his power to declassify documents. According to some legal experts, the President can also appoint his own investigation team to look at potential crimes and abuses inside the DOJ and FBI. Gregg Jarrett might be helpful.

The President probably knows (or can find out from geeks deep in the bowels of the NSA) which adversaries breached the Hillary server and how long our people have known about it. Was it the Russians or the Chinese, or both? Either way, they got a treasure trove and somebody tried to cover it up. Was it Clapper?

And Hillary’s actions were way beyond “careless”.

Then there is the jackpot of documents that the FBI has been playing hide and seek with Congressional investigators. Trumps’s critics will call it reckless when he makes his move, but only the hopelessly naïve believe that there are not some terribly incriminating things there. Who decided the Steele dossier was credible? Was it Orr or McCabe?

Justice demands that the people who mislead the FISA court in order to get approval for surveillance of the Trump campaign be held to account. There is a paper trail.  Exactly when and why did the Russia investigation start? Who authorized it? We will finally learn the scope of the investigation that Mr. Rosenstein approved. What were the crimes? Remember, that is a Justice Department prerequisite. Professor Dershowitz has reminded us that Collusion itself is not a crime. And if there were no real crimes enumerated, why the rush to start an open-ended investigation? Was this just one huge smoke screen to cover up operation Crossfire Hurricane?

Some of the President’s top people will squeal like stuck pigs. A few might resign. Establishment Republicans will gasp.  As the documents are declassified, we may finally gain a clearer understanding of the “Insurance Policy.”

For all of their attempts to stack the deck and mark the cards, the Mueller team has been playing against a guy who knows something about poker. The guy who has owned casinos is about to call their bluff and go all in.