The Little Country that Does

Gil Gutknecht
|
Posted: Mar 11, 2018 12:01 AM
Share   Tweet
The opinions expressed by columnists are their own and do not necessarily represent the views of Townhall.com. 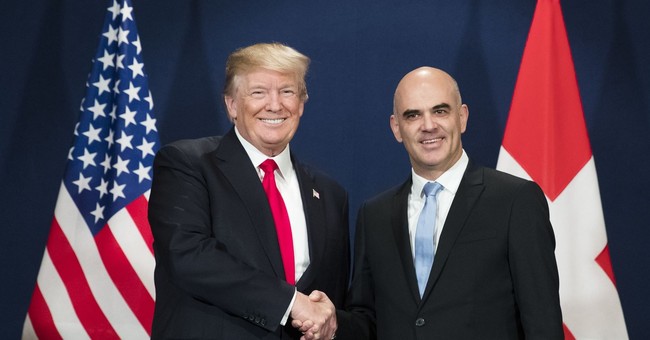 I have long believed that success leaves clues. It makes sense to pay attention to those clues in order to duplicate that success.

When most of us think about Switzerland, we think of great cheese, fine chocolate, and excellent time pieces.  They are also famous for their neutrality. Maybe we Americans should take a closer look. They do a number of things right and we might learn something from them.

Yes, they make excellent cheese, chocolate and watches. They produce some pretty good wine as well. But, did you know that they spend 30% less than we do on healthcare and they have a life expectancy about four years longer? Now, some of my Doctor friends don’t like it when I sight that life expectancy number. They say it has more to do with other societal and cultural factors. Maybe. But four years is not statistically insignificant. Curiously, the average stay in a hospital is two days longer and yet it costs less? Interesting, they don’t have what we would describe as socialized medicine. Everyone is required to buy health insurance from a long list of private companies and plans. Even though they are home to several large pharmaceutical companies including Roche and Novartis, they have a clever way of negotiating prices with the drug companies and they pay less than we do…for the same drugs. It is otherwise essentially a market based system.

Many of us confuse their famous neutrality for military weakness. Au contre! They believe in a strong national defense. The Swiss have mandatory military conscription for all young men and they are armed to the teeth. For their population, they have one of the largest standing armies in the world. Their reputation for loyalty and bravery are among the reasons that the Pope is still protected by the Swiss Guard to this day. After their time in the service, most Swiss take their semi-automatic weapons home with them. They keep them oiled and ready to defend their Alpine republic. By the way, the large number of guns in the hands of civilians has not driven the murder rate anywhere near that of say, Chicago. In fact the Swiss enjoy a pretty low crime rate.They keep an impressive arsenal of sophisticated military hardware hidden in mountain caves. These include modern jet fighters positioned along straight sections of highways that double as landing strips. Just because they stay out of other peoples’ foreign affairs, it doesn’t mean you can mess with the Swiss.

Their neutrality was not the only reason that Hitler never invaded Switzerland in his grand plan for a greater German empire. He and his generals understood that the price of a Swiss invasion would be very high. One of the holidays celebrated in Geneva is called the Escalade. They commemorate the defeat of a foreign power who cavalierly attempted a conquest. Back in 1602 the French Duke of Savoy launched an invasion of Geneva. Swiss housewives poured large pots of boiling soup over the city walls on the invaders. They were quickly driven back across the border. The Duke was never foolish enough to try that again.

The Escalade Holiday ends around the kitchen table. After supper the family discusses the blessings of liberty. The patriarch then announces loudly, “ La mort aux ennemis de la Republique!-Death to the enemies of the Republic!” He then smashes his fist down on a large milk chocolate pot (commemorating the soup pots) that is filled with marzipan candies. The whole family then enjoy the broken chocolate and the candies. It’s like Independence Day, Swiss style. Quite tasty too.

The Swiss are not totally immune to leftist thinking, but they largely ignore much of the nonsense advanced by their larger neighbors. When the European Union proposed a common currency, the Swiss politely said no thanks. The warnings that they would become economically isolated are echoed today by the anti-Brexit baboons. They stuck with the Swiss Franc and it remains the world’s gold standard. You may remember that when the Obama administration sent pallets of cash to the Iranian mullahs, the plane made a stop in Geneva. It wasn’t just to refuel. U.S. federal law prohibited wire transfers to the Iranian regime without approval from Congress, so it had to be cash. The Iranians didn’t want our dirty greenbacks, so we had to convert them into mostly Swiss Francs. We got our hostages back, they got their tribute in good-as-gold Swiss Francs.

The Swiss were not eager to take large numbers of refugees. They wound up accepting some who were on their way from Italy to Germany... and stayed. Muslims aren’t unwelcome in Switzerland. But in a national plebiscite a few years ago, voters rejected their ability to build minarets. The Swiss expect newcomers to assimilate or move on. Switzerland has four official languages, but one common culture. The Swiss take citizenship seriously. While they allow some immigration, it takes twelve years before an immigrant can even apply for citizenship and local citizens retain the right to vote up or down on final approval. They can turn you down for any reason including not being a hard worker. And they do. Amazingly, the Swiss have been able to milk all those cows, make mountains of chocolate and pick those grapes without a large influx of illegal labor.

The Swiss are multilingual. They have a strong work ethic. They enjoy a very high standard of living, a low crime rate and clean, neat cities. As mentioned, they have privatized, affordable health care for all. The Swiss have a small, efficient central government that balances its budget. They stay out of other peoples’ business and do a very good job of managing their own.

If indeed success leaves clues, we could learn a lot from this little landlocked nation. The Swiss have somehow figured out how to maintain their liberty, their culture and do so many things right. I doubt they would mind if we copied a few of their successes.

Gil Gutknecht served six terms in the Minnesota House before being first elected to the U.S. House as a Republican in 1994. He served six terms and now consults with several organizations. He lives in Rochester MN with his wife Mary.