The "Civilization" Of the U.S. Military 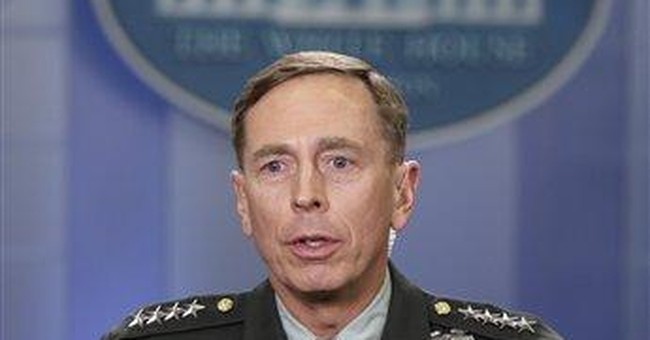 MacDILL AIR FORCE BASE, Fla. -- When asked whether nationalism is putting down roots in Afghanistan's tribalized society, Gen. David Petraeus is judicious: "I don't know that I could say that." He adds, however, that "we do polling" on that subject. When his questioner expresses skepticism about the feasibility of psephology -- measuring opinion -- concerning an abstraction such as nationalism in a chaotic, secretive and suspicious semi-nation, Petraeus, his pride aroused, protests: "I took research methodology" at Princeton. There he acquired a Ph.D. in just two years: His voracious appetite for knowing things is the leitmotif of his career.

Petraeus thinks he knows that President Hamid Karzai is widely viewed as "the father of the new Afghanistan." Although there was widespread fraud in the election last August that extended Karzai's presidency by five years, Petraeus says "ordinary people are not seized with anxiety about electoral corruption." Besides, "there is a democratic culture in these tribal councils," which are "like caucuses, if you will."

Perhaps, but the limitations of this culture are evident in Petraeus' belief that part of the Taliban's appeal, where it has had appeal, has been its ability to offer "dispute resolution" that is sometimes harsh but at least is rapid. And, Petraeus adds, with an inconvenient candor, the Taliban are sometimes "less predatory" than the Afghan security forces. Although strengthening the central government is a U.S. goal, that government's corruption and brutality might make the localities less than eager for it to be strengthened.

In "The Fourth Star: Four Generals and the Epic Struggle for the Future of the United States Army," journalists David Cloud and Greg Jaffe write that Petraeus, briefing subordinates in Iraq, swirled "his emerald-green laser pointer over pie charts and columns full of data. 'I am going to manage you by slides,' he told his troops." His topics would include "Iraq's sclerotic electricity output ... bridge and road reconstruction, chlorine supplies at water-treatment plants ... even chicken embryo imports." And the closing of a bank in a Sunni neighborhood, "a small piece of a broader effort by the Shiite-dominated government to starve Sunni neighborhoods of essential services":

"Petraeus wanted to know: Why had the Shiite finance minister closed the bank? How quickly could the local manager reopen it? How many guards did the bank need and what was the plan to train them?"

This is not the militarization of U.S. policy. Rather, it is the civilianization of the military, an inevitable consequence of nation-building.

Petraeus' desire to know things exceeds the capacity of things that need to be known. But Maj. Gen. Michael Flynn, deputy chief of staff for intelligence in Afghanistan, said early this year that "the vast intelligence apparatus is unable to answer fundamental questions about the environment in which U.S. and allied forces operate and the people they seek to persuade."

Hence the need for different kinds of persuasion, as in this from Petraeus' Iraq guidance: "Employ money as a weapon system." Money can pay local people to build schools and hospitals; money also can buy the "$10 Taliban" -- those who become insurgents just to put food on their tables. Petraeus estimates that at most 30 percent of the Taliban are ideologically fervid.

Counterinsurgency, as codified in Petraeus' writings, is not primarily about killing terrorists, although there is a lot of that. "We have hammered them pretty hard," he says, but "we don't announce every one of them" killed. "The sheer weight of the losses accumulates" -- losses of medical and command-and-control facilities, and sites for manufacturing IEDs (improvised explosive devices).

And counterinsurgency is not primarily about holding real estate. Rather, it is about protecting, and improving the well-being of, the population. This is what he means when he says "the pressure must continue, but not just kinetic pressure."

For America to fail in Afghanistan, against a force lacking airpower, armor, artillery or other serious military sinews, would be diminishing. But so might be the costs of protracted perseverance. In President Obama's calculations, those costs must include the danger of another insurgency -- one in his political base.

During his recent visit to Afghanistan, the president said: "The United States of America does not quit once it starts on something." This is not true, nor should it be. Because Petraeus cannot subdue the Taliban militarily in a time frame that American opinion will sustain, Petraeus' challenge is to persuade enough of the Taliban to abandon the fight before the Democratic Party base persuades the president to abandon it.