A Lobe Divided Will Not Stand 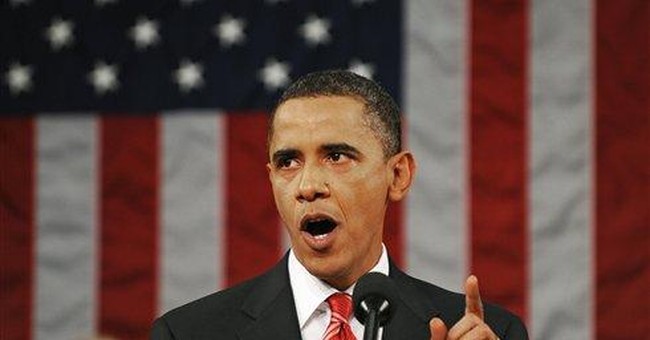 The dominant liberal lobe favors Adams' dictum that politicians should not be "palsied by the will of our constituents." It exhorts Democrats to smack Americans with what is good for them -- health care reform, carbon rationing, etc. -- even if the dimwits do not desire it.

The other lobe whispers Freud's reality principle: Restrain your id -- the pleasure principle and the impulse toward immediate gratification. Settle for deferred and diminished but achievable results.

Obama was mostly in Adams' mode Wednesday. His nods to reality were, however, notable.

Such speeches must be listened to with a third ear that hears what is not said. Unmentioned was organized labor's "card check" legislation to abolish workers' rights to secret ballots in unionization elections. Obama's perfunctory request for a "climate bill" -- the term "cap-and-trade" was as absent as the noun "Guantanamo" -- was not commensurate with his certitude that life on Earth may drown in rising seas.

Last Feb. 24, when unemployment was 8.2 percent, Obama said in the second sentence of his speech to Congress that the economy "is a concern that rises above all others" and later that his agenda "begins with jobs." After 11 months of health care monomania, he said Wednesday that "jobs must be our No. 1 focus." Unemployment is 10 percent.

He called Wednesday for a third stimulus (the first was his predecessor's, in February 2008) although the S-word has been banished in favor of "jobs bill." It will inject into the economy money that government siphons from the economy, thereby somehow creating jobs. And you thought alchemy was strange.

Not until the 33rd minute of Wednesday's 70-minute address did Obama mention health care. The weirdness of what he said made it worth the wait.

Acknowledging that the longer the public has looked at the legislation the less the public has liked it, he blamed himself for not "explaining it more clearly." But his faux contrition actually blames the public: The problem is not the legislation's substance but the presentation of it to slow learners. He urged them to take "another look at the plan we've proposed." The plan? The differences between the House and Senate plans are not trivial; they concern how to pay for the enormous new entitlement.

Last Feb. 24, with a grandiosity with which the nation has become wearily familiar, he said, "Already, we have done more to advance the cause of health care reform in the last 30 days than we have in the last decade." He was referring to the expansion of eligibility to an existing entitlement -- the State Children's Health Insurance Program. But that expansion was minor compared to the enormous new Medicare entitlement for prescription drugs created under Obama's predecessor. Before the Massachusetts nuisance, this year's speech was to be a self-coronation of the "last" president to deal with health care.

Last Feb. 24, he said he had an activist agenda because of the recession, "not because I believe in bigger government -- I don't." Ninety-seven days later, he bought General Motors.

Wednesday night's debut of Obama as avenging angel of populism featured one of those opaque phrases -- the "weight of our politics" -- that third-rate speechwriters slip past drowsy editors. Obama seems to regret the existence in Washington of ... everyone else. He seems to feel entitled to have his way without tiresome interventions in the political process by the many interests affected by his agenda for radical expansion of the regulatory state. Speaking of slow learners, liberals do not notice the connection between expansion of government and expansion of (often defensive) activities referred to under the rubric of "lobbying."