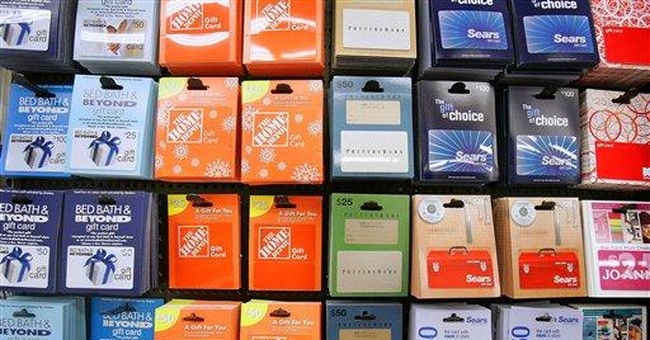 WASHINGTON -- Another huge value-destroying hurricane is about to slam America, destroying billions of dollars of value. Another Katrina? No, another Christmas.

This voluntary December calamity is explained in a darkly amusing little book that is about the size of an iPhone. "Scroogenomics: Why You Shouldn't Buy Presents for the Holidays" comes from a distinguished publisher, Princeton University Press, and an eminent author, Joel Waldfogel of the University of Pennsylvania's Wharton business school. He says that the crux of Yuletide economics, which common sense suggests and research confirms, is:

By calculating the difference between the consumption of holiday goods (e.g., jewelry, but not gasoline) in December as opposed to November and January, you get a rough estimate of Christmas spending. Waldfogel's conservative estimate is that in 2007, Americans spent $66 billion on gifts and produced $12 billion less satisfaction than would have been produced if the recipients had spent the $66 billion on themselves.

At least the Christmas stimulus strengthens the economy, right? Wrong, says Waldfogel. If all spending justified itself, we would pay people to dig holes and then refill them -- or build bridges to unpopulated Alaskan islands. Spending is good if the purchaser, or the recipient of a gift, values the commodity more than he does the money it costs. Otherwise, there is a subtraction from society's store of value.

Christmas etiquette involves composing one's face to feign pleasure when unwrapping an unwelcome windfall -- say, a sweater of an appalling color and a style that went out of style in the 1940s -- and murmuring "Oh, you shouldn't have" without revealing that you mean exactly that. Price of the sweater: $50. Value to recipient: $0. Actually, less than zero, considering the psychological cost of the forced smile.

But, you say, what about sentimental value? Don't you value the thoughtfulness of dotty Uncle Ralph who gave you the sweater? Actually, Ralph's sentiment in selecting it was like your sentiment when you selected for him the candle shaped like Gandhi -- desperate bewilderment about what he might like.

Were it not for sentimentality about sentiments, which are highly overrated, we would behave rationally, giving cash, thereby avoiding value subtraction. We almost do that with wedding registries. And cash for Christmas, or semi-cash in the form of gift cards, no longer seems so tacky. Between 1998 and 2005, gift card sales grew 27 percent a year. They now are about one-third of Christmas spending and rank near the top of lists of preferred gifts. Grandmothers, especially, should give cash to grandchildren. Instead they think, "What did I get when I was young?" and then they give a kaleidoscope to Jimmy, who wanted Grand Theft Auto IV and now wants to trade grandma for Grand Theft Auto IV.

A tenth of gift cards' values, worth billions of dollars, are never redeemed. The cards are lost Christmas morning in the blizzard of wrapping paper, or just forgotten. Waldfogel proposes that after a year, gift cards expire and the unredeemed values be given to charities.

Furthermore, he says, there are some goods -- e.g., Spam -- that people spend less on as they become richer, and there are other things on which people spend larger portions of their incomes as their incomes rise. These are called luxuries. One such is charity. So, particularly for the rich or ascetic person who has everything he or she wants, why not gift cards useable only for charities? Some organizations (e.g., Charity Navigator and charitygiftcertificates.org) facilitate this.

"There are worlds of money wasted, at this time of year, in getting things that nobody wants, and nobody cares for after they are got." So said Harriet Beecher Stowe in 1850. Waldfogel says every generation thinks it invented both sex and Christmas excess. But retail sales statistics demonstrate that the "Yuletide bump" was a larger share of GDP in 1935. Data from 1919 concerning the retail giants of the day -- mail-order companies (e.g., Sears and Montgomery Ward) and "dime stores" (e.g., Woolworth) -- actually show that Christmas sales as a share of the economy is about half as large as it once was. This means proportionally less value subtraction. Hallelujah.