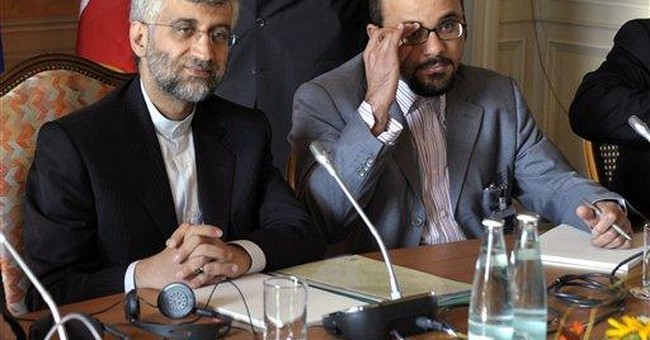 WASHINGTON -- Last Thursday, the president's "engagement" with Iran began. This Wednesday, the U.S. war in Afghanistan will enter its ninth year. And U.S. foreign policy is entering a White Queen phase.

In "Through the Looking Glass," Alice says she is unable to believe the White Queen's claim to be 101. The Queen responds, "Try again: draw a long breath, and shut your eyes." Alice: "There's no use trying, one can't believe impossible things." Queen: "Why, sometimes I've believed as many as six impossible things before breakfast."

Regarding Afghanistan, the president might believe he can effect a Houdini-like escape, uninjured, from the box his words have built. Regarding Iran, he seems to believe its leaders can be talked or coerced (by economic sanctions) out of their long, costly pursuit of nuclear weapons by convincing them that such weapons do not serve Iran's "security."

On March 27, the president announced "a comprehensive new strategy for Afghanistan and Pakistan." He said his "clear and focused goal" was to prevent the Taliban from toppling Afghanistan's government, and to prevent al-Qaeda from returning to Afghanistan or Pakistan. U.S. forces "will take the fight to the Taliban" in Afghanistan's "south" and "east" but "at the same time, we will shift the emphasis of our mission to training and increasing the size of Afghan security forces."

On Aug. 17, the president reiterated his belief that U.S. involvement in Afghanistan is "not a war of choice. This is a war of necessity." This was two months after he replaced the U.S. commander there with Gen. Stanley McChrystal, directing him to assess the resources required for the strategy. The general has done that. But the president does not yet want to discuss troop numbers. Why not?

The president's national security adviser, Jim Jones, a former four-star Marine general, told The Washington Post that before deciding on troop levels, the focus must be on strategy: "The bumper sticker here is strategy before resources." So, is the president reassessing his March 27 strategy? If so, why?

Perhaps because fraud devalued Afghanistan's election. But it was not a sunburst of new information that President Hamid Karzai is corrupt. Or did the president believe, as only the White Queen could, that Karzai had reformed?

Granted, counterinsurgency -- especially when it includes the nation-building implicit in McChrystal's assessment -- requires a reliable partner. But, again, Karzai was a known commodity on March 27. Besides, a presidential strategy is half-baked if its author decides it is dubious after its first collision with difficulty.

Regarding Iran, what did we learn when we learned about the secret nuclear facility in the tunnel? That Iran is pursuing nuclear weapons? We knew that. That Iran lies? We knew that, too. We did, however, learn something when the president, at the G-20 meeting in Pittsburgh, went public with his knowledge of the facility.

On one side of the president stood France's president. On the other side stood Britain's prime minister, who said Iran's behavior would "shock and anger the whole international community." Not quite. The leaders of Russia and China were not standing with the president.

China has contracted to provide Iran with gasoline, a commodity that could be central to what Defense Secretary Robert Gates calls "severe" sanctions that he thinks might cause Iran to change course. Russia's real leader, Vladimir Putin, was not even in Pittsburgh. Russia's Potemkin president, Dmitry Medvedev, did say something that only the White Queen could believe means that Russia will participate in serious pressure on Iran: Sanctions are not "the best means of obtaining results" but "if all possibilities" are exhausted, "we could consider international sanctions." Over to you, Queen.

Gates says "the only way" to prevent a nuclear-capable Iran "is for the Iranian government to decide that their security is diminished by having those weapons, as opposed to strengthened." But to accept that formulation requires accepting two propositions that would tax the White Queen's powers of belief.

One is that possession of nuclear weapons would make Iran less secure. Question: If Saddam Hussein had possessed nuclear weapons in March 2003, would the United States have invaded Iraq? Iran's leaders probably think they know the answer.

The other proposition is that Iran's regime seeks nuclear weapons merely to enhance the nation's security and not also for regional hegemony or the enjoyment of the enlarged status that comes from being a nuclear power. To believe that, draw a long breath, and shut your eyes.