In Afghanistan, Knowing When to Stop 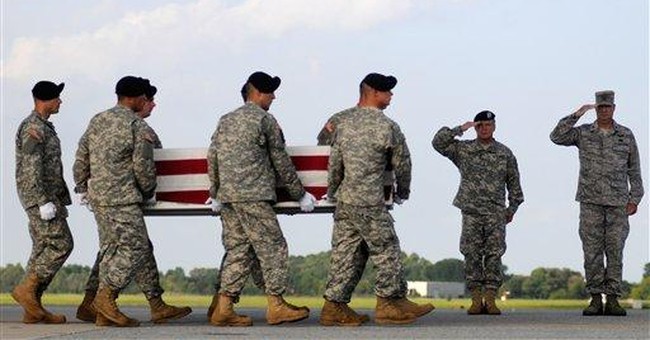 WASHINGTON -- "Yesterday," reads the e-mail from Allen, a Marine in Afghanistan, "I gave blood because a Marine, while out on patrol, stepped on a (mine's) pressure plate and lost both legs." Then "another Marine with a bullet wound to the head was brought in. Both Marines died this morning."

"I'm sorry about the drama," writes Allen, an enthusiastic infantryman willing to die "so that each of you may grow old." He says: "I put everything in God's hands." And: "Semper Fi!"

U.S. strategy -- protecting the population -- is increasingly troop-intensive while Americans are increasingly impatient about "deteriorating" (says Adm. Mike Mullen, chairman of the Joint Chiefs of Staff) conditions. The war already is nearly 50 percent longer than the combined U.S. involvements in two world wars, and NATO assistance is reluctant and often risible.

U.S. strategy is "clear, hold and build." Clear? Taliban forces can evaporate and then return, confident that U.S. forces will forever be too few to hold gains. Hence nation-building would be impossible even if we knew how, and even if Afghanistan were not the second-worst place to try: The Brookings Institution ranks Somalia as the only nation with a weaker state.

Military historian Max Hastings says Kabul controls only about a third of the country -- "control" is an elastic concept -- and "'our' Afghans may prove no more viable than were 'our' Vietnamese, the Saigon regime." Just 4,000 Marines are contesting control of Helmand province, which is the size of West Virginia. The New York Times reports a Helmand official saying he has only "police officers who steal and a small group of Afghan soldiers who say they are here for 'vacation.'"

Afghanistan's $23 billion GDP is the size of Boise's. Counterinsurgency doctrine teaches, not very helpfully, that development depends on security, and that security depends on development. Three-quarters of Afghanistan's poppy production for opium comes from Helmand. In what should be called Operation Sisyphus, U.S. officials are urging farmers to grow other crops. Endive, perhaps?

Even though violence exploded across Iraq after, and partly because of, three elections, Afghanistan's recent elections were called "crucial." To what? They came, they went, they altered no fundamentals, all of which militate against American "success," whatever that might mean. Creation of an effective central government? Afghanistan has never had one. U.S. Ambassador Karl Eikenberry hopes for a "renewal of trust" of the Afghan people in the government, but The Economist describes President Hamid Karzai's government -- his vice presidential running mate is a drug trafficker -- as so "inept, corrupt and predatory" that people sometimes yearn for restoration of the warlords, "who were less venal and less brutal than Mr. Karzai's lot."

Adm. Mullen speaks of combating Afghanistan's "culture of poverty." But that took decades in just a few square miles of the South Bronx. Gen. Stanley McChrystal, U.S. commander in Afghanistan, thinks jobs programs and local government services might entice many "accidental guerrillas" to leave the Taliban. But before launching New Deal 2.0 in Afghanistan, the Obama administration should ask itself: If U.S. forces are there to prevent re-establishment of al-Qaeda bases -- evidently there are none now -- must there be nation-building invasions of Somalia, Yemen and other sovereignty vacuums?

U.S. forces are being increased by 21,000 to 68,000, bringing the coalition total to 110,000. About 9,000 are from Britain, where support for the war is waning. Counterinsurgency theory concerning the time and the ratio of forces required to protect the population indicates that, nationwide, Afghanistan would need hundreds of thousands of coalition troops, perhaps for a decade or more. That is inconceivable.

So, instead, forces should be substantially reduced to serve a comprehensively revised policy: America should do only what can be done from offshore, using intelligence, drones, cruise missiles, airstrikes and small, potent special forces units, concentrating on the porous 1,500-mile border with Pakistan, a nation that actually matters.

Genius, said de Gaulle, recalling Bismarck's decision to halt German forces short of Paris in 1870, sometimes consists of knowing when to stop. Genius is not required to recognize that in Afghanistan, when means now, before more American valor, such as Allen's, is squandered.