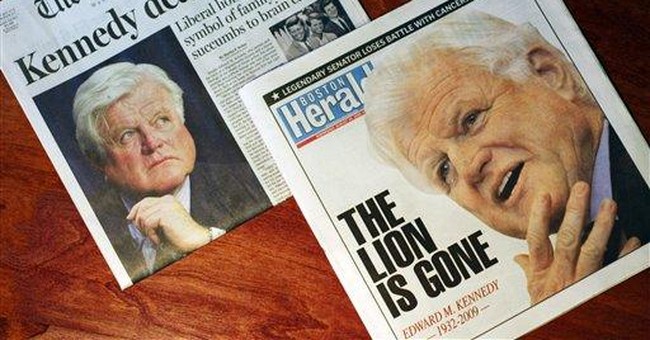 WASHINGTON -- At the Democrats' 1960 convention in Los Angeles that nominated John Kennedy, his 28-year-old brother Ted was standing with the Wyoming delegation when it sealed the victory. He was then a sibling for minor missions. He would become the most consequential brother.

His two political brothers were young men in a hurry: John became the youngest elected president at 43; Robert died at 42, seeking the presidency as soon as possible after the murder of his brother. Ted came to embody the patience of politics. Charisma is less potent than the smitten imagine; endurance is not sufficient, but is necessary.

There is the arithmetic of the Constitution and then there is the life of the institution. The Constitution makes a senator 1 percent of one-half of one of the three branches of the federal government. But the intangible and unquantifiable chemistry of personality in a little laboratory like the Senate made Ted Kennedy forceful.

In the Senate, as elsewhere, 80 percent of the important work is done by a talented 20 percent. And 95 percent of the work is done off the floor, away from committees, out of sight, where strong convictions leavened by good humor are the currency of accomplishment. There Ted Kennedy, who had the politics of the Boston Irish in his chromosomes, flourished. What Winston Churchill said about Franklin Roosevelt -- that meeting him was like opening a bottle of champagne, and knowing him was like drinking it -- was true of Ted Kennedy, too.

He was an unapologetic liberal in an era during which liberalism lost ground. It began to recede in 1966, when he had 43 Senate years ahead of him. His most famous speech, to the 1980 convention, is remembered for its "the dream shall never die" peroration, but much of it was robust condescension regarding Ronald Reagan, whose subsequent landslide victory was proof of a political tide that would not be turned by ridicule. Kennedy's second-most memorable speech, a remarkably meretricious denunciation of Robert Bork, demonstrated the merely contingent connection between truth and rhetorical potency.

It is an old axiom: "All men are by nature equal/But differ greatly in the sequel." This presidency-obsessed nation should note that most of Ted Kennedy's achievements were sequels to his presidential possibilities. He may have known, in the realism of his fine political mind, that his behavior at Chappaquiddick, 40 years ago last month, would be an insuperable obstacle to his presidential ambitions, about which he seems to have been deeply ambivalent. When he unsuccessfully challenged an incumbent president of his own party for the 1980 nomination, he was at last liberated from the burdens of his sense of duty and of other peoples' expectations and ambitions.

Kennedy served in the Senate for almost 47 years, more than a fifth of the life of the Constitution. He arrived in 1962, before passage of the important civil rights laws, and before the more humane sensibilities that those laws helped to shape. For most of his career he served with the only two senators whose tenures were longer than his -- South Carolina's Strom Thurmond and West Virginia's Robert Byrd, still serving at 91. The latter was once a member of the Ku Klux Klan. The former was an unyielding segregationist until the Voting Rights Act of 1965 -- which a larger percentage of Republican than of Democratic senators voted for -- began changing Southern electoral arithmetic. Ted Kennedy participated in unmaking the society that made them.

The last of Joe and Rose Kennedy's nine children, Ted died 14 days after his sister Eunice. It is arguable, and he might have cheerfully conceded, that Eunice was the most consequential Kennedy, at least as measured by the selfless enlargement of happiness. She lived a luminous life, perhaps because of the dark fate of the third oldest of Ted's siblings.

Rosemary was mentally retarded. She was lobotomized and institutionalized. This grotesque response by Rosemary's father to her handicap became a blessing for subsequent mentally disabled Americans, whose afflictions summoned Eunice to her vocation of amelioration.

Let us pay the Kennedys tributes unblurred by tears. Although a great American family, they are not even Massachusetts' greatest family: The Adamses provided two presidents, John and John Quincy, and Charles Francis, who was ambassador to Britain during the Civil War, and the unclassifiable Henry. Never mind. It diminishes Ted to assess him as a fragment of a family. He lived his own large life and the ledger of it shows a substantial positive balance.