Have We Got a Deal For You 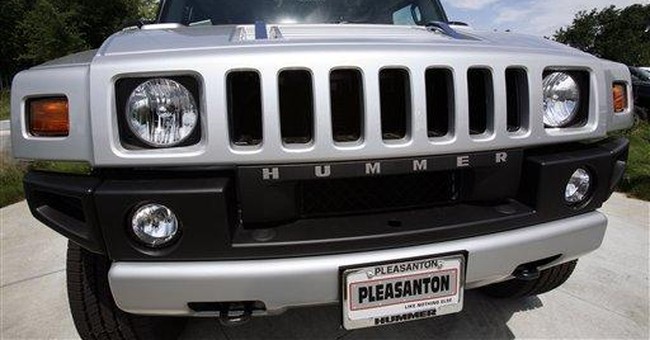 WASHINGTON -- "I," said the president, who is inordinately fond of the first-person singular pronoun, "want to disabuse people of this notion that somehow we enjoy meddling in the private sector." He said that in March, when the government already owned 80 percent of AIG, Fannie Mae and Freddie Mac. "When a difficult decision has to be made on matters like where to open a new plant or what type of new car to make, the new GM, not the United States government, will make that decision." But the government is GM's largest shareholder, customer, tax collector, regulator, partner in determining employees' compensation, protector of dealers and pension guarantor. GM's other large owner, the United Auto Workers, is increasingly a government dependant.

Yet Steve Rattner and Ron Bloom, two of the president's fixers of Detroit, recently wrote in USA Today that government "will play no role" in running GM. They were not under oath.

"What we are not doing -- what I have no interest in doing -- is running GM," says the president who, when not firing GM's CEO, purging its board of directors and picking new members, is designing new products (imposing fuel economy requirements that will control size, weight, passenger capacity and safety). The president, overcoming his professed reluctance to run GM, resembles the journalist Don Marquis when, after a month on the wagon, he ordered a double martini and exclaimed: "I've conquered my goddam willpower."

Washington mandates that Detroit must build cars for which there is much less demand than Washington demands that there be. Then Washington tries to manufacture demand with a $7,500 tax credit for purchasers of the electric Chevrolet Volt, supposedly GM's salvation. So, GM is to be saved by a product people will not buy without a cash incentive larger than the income tax paid by 83.4 percent of America's families.

It is reasonable to assume that GM will become profitable -- if you make unreasonable assumptions about annual vehicle sales and GM's share of the market. Besides, the government that runs Amtrak (which has lost $23 billion, in today's dollars, just since 1990) vows to make GM efficient.

But one reason Amtrak runs on red ink is that legislators treat it as their toy train set, preventing it from cutting egregiously unprofitable routes. Will Congress passively accept auto plant-closing decisions? Rattner says Washington's demure vow is: "No plant decisions, no dealer decisions, no color-of-the-car decisions." He is one-third right. Last week, under the headline "Senators Blast Automakers Over Dealer Closings," The Washington Post reported, "Because the federal government is slated to own most of General Motors and 8 percent of Chrysler, some of the senators said they have a responsibility, as major shareholders do, to review company decisions."

The pressure to politicize the economy is spreading. John Sweeney, head of the AFL-CIO, and Gerald McEntee, head of the American Federation of State, County and Municipal Employees -- which is government organized as an interest group to lobby itself -- have demanded the resignation of two directors of Citigroup. Their premise is that businesses receiving direct government subventions should conform to the wishes of the president's allies.

GM is adopting new ways to lose money: Responsive to its UAW masters, GM is moving from China to America the production of some components of one Chevrolet model. Says UAW President Ron Gettelfinger, "It should be built here if it's going to be sold here." That principle, now successfully asserted, means economic autarky -- the end of international trade, and of prosperity.

The government's $50 billion -- so far -- acquisition of the shadow of GM will injure, with unfair financial advantages, the surprisingly healthy U.S. auto company, Ford. Of course, the government does not intend that injury, any more than it intended to cause protests in Mexico over the high price of corn tortillas, a result of Washington's mandate that Americans burn corn (ethanol) in their cars.

Washington's "rescue" of GM began because GM is "too big to fail," and bankruptcy is (well, was) "unthinkable." Big? GM's market capitalization, $375.8 million on Wednesday, is about the size of California Pizza Kitchen's ($340 million) -- is it too big to fail? -- and one-eleventh that of Harley-Davidson ($4.3 billion). Fail? If GM has not already failed, New Coke was a success.

The administration is determined to prop up GM as a jobs program for the UAW and Midwestern states rich in electoral votes. This frenzy will intensify as the administration's decisions deepen the debacle.