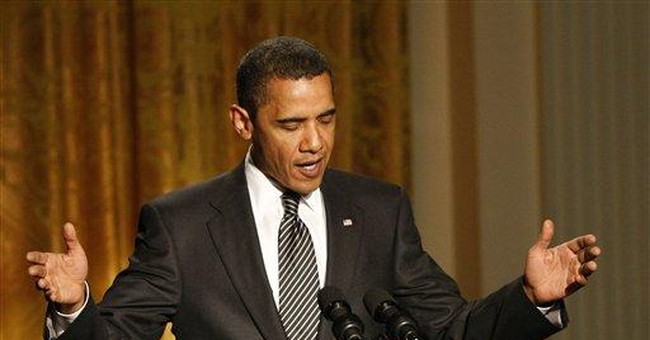 WASHINGTON -- Anyone, said T.S. Eliot, could carve a goose, were it not for the bones. And anyone could govern as boldly as their whims decreed, were it not for the skeletal structure that keeps civil society civil -- the rule of law. The Obama administration is bold. It also is careless regarding constitutional values and is acquiring a tincture of lawlessness.

In February, California's Democratic-controlled Legislature, faced with a $42 billion budget deficit, trimmed $74 million (1.4 percent) from one of the state's fastest growing programs, which provides care for low-income and incapacitated elderly and cost the state $5.42 billion last year. The Los Angeles Times reports that "loose oversight and bureaucratic inertia have allowed fraud to fester."

But the Service Employees International Union collects nearly $5 million a month from 223,000 caregivers who are members. And the Obama administration has told California that unless the $74 million in cuts are rescinded, it will deny the state $6.8 billion in stimulus money.

Such a federal ukase (the word derives from czarist Russia; how appropriate) to a state legislature is a sign of the administration's dependency agenda -- maximizing the number of people and institutions dependent on the federal government. For the first time, neither sales nor property nor income taxes are the largest source of money for state and local governments. The federal government is.

The SEIU says the cuts violate contracts negotiated with counties. California officials say the state required the contracts to contain clauses allowing pay to be reduced if state funding is.

Anyway, the Obama administration, judging by its cavalier disregard of contracts between Chrysler and some of the lenders it sought money from, thinks contracts are written on water. The administration proposes that Chrysler's secured creditors get 28 cents per dollar on the $7 billion owed to them, but that the United Auto Workers union get 43 cents per dollar on its $11 billion in claims -- and 55 percent of the company. This, even though the secured creditors' contracts supposedly guaranteed them better standing than the union.

Among Chrysler's lenders, some servile banks that are now dependent on the administration for capital infusions tugged their forelocks and agreed. Some hedge funds among Chrysler's lenders who are not dependent were vilified by the president because they dared to resist his demand that they violate their fiduciary duties to their investors, who include individuals and institutional pension funds.

The Economist says the administration has "ridden roughshod over (creditors') legitimate claims over the (automobile companies') assets. ... Bankruptcies involve dividing a shrunken pie. But not all claims are equal: some lenders provide cheaper funds to firms in return for a more secure claim over the assets should things go wrong. They rank above other stakeholders, including shareholders and employees. This principle is now being trashed." Tom Lauria, a lawyer representing hedge fund people trashed by the president as the cause of Chrysler's bankruptcy, asked that his clients' names not be published for fear of violence threatened in e-mails to them.

The Troubled Assets Relief Program, which has not yet been used for its supposed purpose (to purchase such assets from banks), has been the instrument of the administration's adventure in the automobile industry. TARP's $700 billion, like much of the supposed "stimulus" money, is a slush fund the executive branch can use as it pleases. This is as lawless as it would be for Congress to say to the IRS: We need $3.5 trillion to run the government next year, so raise it however you wish -- from whomever, at whatever rates you think suitable. Don't bother us with details.

This is not gross, unambiguous lawlessness of the Nixonian sort -- burglaries, abuse of the IRS and FBI, etc. -- but it is uncomfortably close to an abuse of power that perhaps gave Nixon ideas: When in 1962 the steel industry raised prices, President Kennedy had a tantrum and his administration leaked rumors that the IRS would conduct audits of steel executives, and sent FBI agents on pre-dawn visits to the homes of journalists who covered the steel industry, ostensibly to further a legitimate investigation.

The Obama administration's agenda of maximizing dependency involves political favoritism cloaked in the raiment of "economic planning" and "social justice" that somehow produce results superior to what markets produce when freedom allows merit to manifest itself, and incompetence to fail. The administration's central activity -- the political allocation of wealth and opportunity -- is not merely susceptible to corruption, it is corruption.