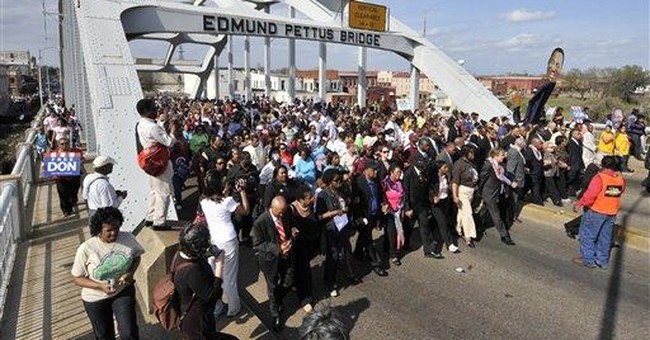 WASHINGTON -- During Reconstruction, Mississippi created a "shoestring" congressional district, sweeping so many blacks into a narrow district along the river that other districts had comfortably large white majorities. This was racial gerrymandering deplored by liberals.

Last week, two days after the 44th anniversary of the Selma march that helped pass the 1965 act, the Supreme Court took a timid step toward limiting the perverse use of that act to create political set-asides -- elective offices to which certain preferred minorities are entitled. Last week's ruling revisits the strange career of racial gerrymandering -- how that practice went from execrable to virtuous to mandatory, and became yet another manifestation of the entitlement mentality.

In 1965, the VRA was enacted to combat racial discrimination that denied equal access to voting. Because of judicial interpretations and legislative amendments, it now requires racial discrimination in the name of guaranteeing effective voting by certain preferred minorities (blacks and Hispanics). Effectiveness is understood as successful racial or ethnic bloc voting, with success understood as electing members of those blocs. Such results -- minorities electing minority candidates -- have come to be regarded as necessary and sufficient proof of real voting rights.

In 1982, the act was amended (Section 2) to say that a violation occurs if nominating and electing processes "are not equally open to participation" by minority voters in that they "have less opportunity than other members of the electorate to participate in the political process and to elect representatives of their choice." Note that there is no mention of "vote dilution."

But the amended VRA has been construed as follows: Equal "participation" of and "opportunity" for minorities means their ability to elect candidates of their choice, and that must mean minority candidates. Otherwise there has been illegal dilution of the minority vote. Such repellant reasoning expresses two tenets of liberalism's racial fatalism: identity politics (your political identity is your race, gender, ethnicity or sexual orientation) and categorical representation (members of an identity cohort can only be understood, empathized with and represented by members of that cohort).

Racial gerrymandering having thus become a moral imperative, North Carolina's Legislature created a "majority-minority" (a voting-age population 56 percent black) state legislative district after the 1990 census. But the 2000 census revealed that demographic changes had made that district just 35 percent black. So the Legislature tinkered with the district's shape to make it 39 percent minority. But it did so by again dividing two counties, which North Carolina's Constitution forbids.

This time Pender County sued. A state court said the VRA's Section 2 required splitting Pender, but North Carolina's Supreme Court held that Section 2 only protects against vote dilution in drawing district lines when a minority group is a majority. Last week, the U.S. Supreme Court agreed -- even though Section 2 says nothing whatever about a bright numerical line like this "50 percent rule."

In an opinion joined only by Chief Justice John Roberts and Justice Sam Alito, Justice Anthony Kennedy lamented that "racially polarized voting" is "not ancient history." Well, yes. It is federal policy: By codifying the assumption that people of a particular race will and should think and vote alike, the VRA now encourages such voting by treating it as normal, and hence sort of admirable.

Justice Clarence Thomas, joined by Justice Antonin Scalia, endorsed only Kennedy's conclusion. Thomas rejected Kennedy's argument, noting the glaring fact that Section 2's text provides no basis -- none -- for "any vote dilution claim, regardless of the size of the minority population in a given district." The VRA, properly read, concerns only "access to the ballot."

But it has been improperly read by result-oriented lawyers skillful at creative construing, and by judges legislating their own notions of racial rectitude. The VRA was written to protect each individual's right to vote. Having been twisted to serve group rights -- certain groups' entitlements to win quotas of offices -- the VRA has become emblematic of both the noble flourishing and the ignoble decline of the civil rights movement.