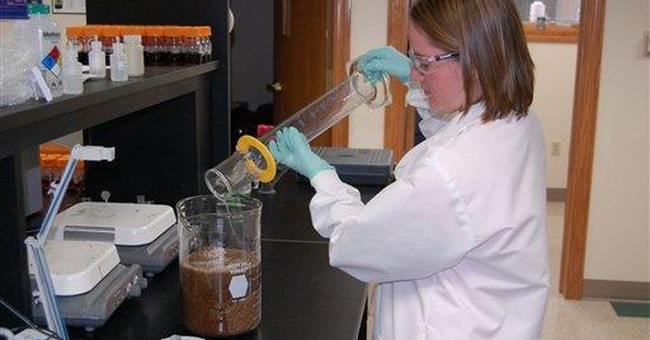 We're from I-o-way, I-o-way,
State of all the land
Joy on ev'ry hand ...
That's where the tall corn grows.
-- Iowa's unofficial song

WASHINGTON -- Tom Vilsack, Iowa's former governor, calls his "the most important department in government," noting that the Agriculture Department serves education through school nutrition programs and serves diplomacy by trying to wean Afghanistan from a poppy-based (meaning heroin-based) economy. But Vilsack's department matters most because of the health costs of the American diet. If Michael Pollan is right, the problem is rooted in politics and, in a sense, Iowa.

Pollan, author of "The Omnivore's Dilemma" and "In Defense of Food," says that after World War II the government had a huge surplus of ammonium nitrate, an ingredient of explosives -- and fertilizer. Furthermore, pesticides could be made from ingredients of poison gases. Since 1945, the food supply has increased faster than America's population -- faster even than Americans can increase their feasting.

Agricultural commodity prices generally fall. But when a rare surge in food prices gave the Nixon administration a political scare, government policy, expressed in commodity subsidies, has been, Pollan writes, to sell "large quantities of calories as cheaply as possible," especially calories coming from corn.

"All flesh is grass" says Scripture. Much of the too-ample flesh of Americans (three of five are overweight; one in five is obese) comes from corn, which is a grass. A quarter of the 45,000 items in the average supermarket contain processed corn. Fossil fuels are involved in the planting, fertilizing, harvesting, transporting and processing of the corn. America's food industry uses about as much petroleum as America's automobiles do.

During World War II, when meat, dairy products and sugar were scarce, heart disease plummeted. It rebounded when rationing ended. "When you adjust for age," Pollan writes, "rates of chronic diseases like cancer and type 2 diabetes are considerably higher today than they were in 1900." Type 2 diabetes -- a strange epidemic: one without a virus, bacteria or other microbe -- was called adult onset diabetes until children began getting it. Now it is a $100 billion-a-year consequence of, among other things, obesity related to a corn-based diet, which is partly because steaks and chops have pushed plants off the plate.

Four of the top 10 causes of American deaths -- coronary heart disease, diabetes, stroke and cancer -- have, Pollan says, "well-established links" to diet, particularly through "the superabundance of cheap calories of sugar and fat." What he calls America's "national eating disorder" is not just the fact that Americans reportedly eat one in five meals in cars (gas stations make more from food and cigarettes than from gasoline) and that one in three children eats fast food every day. He also means the industrialization of agriculture, wherein we developed a food chain that derives too much of its calories -- energy -- not from the sun through photosynthesis but from fossil fuels.

In 1900, Vilsack says, Iowa's population was larger than California's and Florida's combined. But it is the only state whose population did not double in the 20th century. Yet Iowa's fewer farmers, planting (as government has exhorted) "fencerow to fencerow" and deploying an arsenal of chemical fertilizers, can tickle five tons of corn from an acre.

Corn, which covers 125,000 square miles of America -- about the size of New Mexico -- fattens 100 million beef cattle, and at least that many bipeds. Much of the river of cheap corn becomes an ocean of high-fructose corn syrup, which by 1984 was sweetening Coke and Pepsi. Disposing of the corn also requires passing it through animals' stomachs. Corn, together with pharmaceuticals and other chemicals -- a Pollan axiom: "You are what what you eat eats, too" -- has made it profitable to fatten cattle on feedlots rather than grass, cutting by up to 75 percent the time from birth to slaughter. Eating corn nourished by petroleum-based fertilizers, a beef cow consumes almost a barrel of oil in its lifetime.

Vilsack's department is entwined with the food industry that produces a food supply unhealthily simplified by the dominance of a few staples such as corn. This diet, Pollan says, has made many Americans both overfed and undernourished.

Hippocrates enjoined doctors: "Do no harm." He also said something germane to a nation that is harming itself with its knives and forks: "Let food be thy medicine." That should be carved in stone over the entrance to Vilsack's very important department.