The Hyperbole of a Conservative 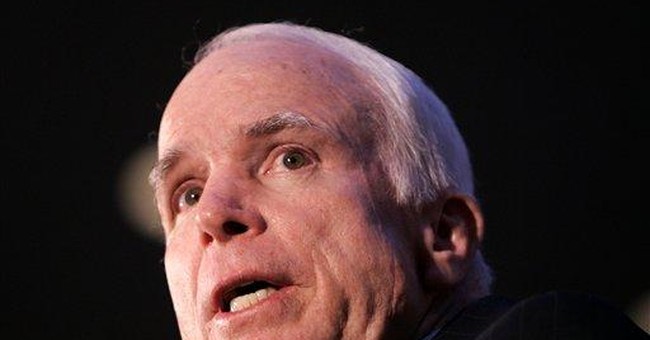 WASHINGTON -- Conservatism's current intellectual chaos reverberated in the Republican ticket's end-of-campaign crescendo of surreal warnings that big government -- verily, "socialism" -- would impend were Democrats elected. John McCain and Sarah Palin experienced this epiphany when Barack Obama told a Toledo plumber that he would "spread the wealth around."

America can't have that, exclaimed the Republican ticket while Republicans -- whose prescription drug entitlement is the largest expansion of the welfare state since President Lyndon Johnson's Great Society gave birth to Medicare in 1965; a majority of whom in Congress supported a lavish farm bill at a time of record profits for the less than 2 percent of the American people-cum-corporations who farm -- and their administration were partially nationalizing the banking system, putting Detroit on the dole and looking around to see if some bit of what is smilingly called "the private sector" has been inadvertently left off the ever-expanding list of entities eligible for a bailout from the $1 trillion or so that is to be "spread around."

The seepage of government into everywhere is, we are assured, to be temporary and nonpolitical. Well.

Probably as temporary as New York City's rent controls, which were born as emergency responses to the Second World War, and which are still distorting the city's housing market. The Depression, which FDR failed to end but which Japan's attack on Pearl Harbor did end, was the excuse for agriculture subsidies that have lived past three score years and 10.

The distribution of a trillion dollars by a political institution -- the federal government -- will be nonpolitical? How could it be? Either markets allocate resources, or government -- meaning politics -- allocates them. Now that distrust of markets is high, Americans are supposed to believe that the institution they trust least -- Congress -- will pony up $1 trillion and then passively recede, never putting its 10 thumbs, like a manic Jack Horner, into the pie? Surely Congress will direct the executive branch to show compassion for this, that and the other industry. And it will mandate "socially responsible" spending -- an infinitely elastic term -- by the favored companies.

Detroit has not yet started spending the $25 billion that Congress has approved, but already is, like Oliver Twist, holding out its porridge bowl and saying, "Please, sir, I want some more."

McCain and Palin, plucky foes of spreading the wealth, must have known that such spreading is most what Washington does. Here, the Constitution is an afterthought; the supreme law of the land is the principle of concentrated benefits and dispersed costs. Sugar import quotas cost the American people approximately $2 billion a year, but that sum is siphoned from 300 million consumers in small, hidden increments that are not noticed. The few thousand sugar producers on whom billions are thereby conferred do notice and are grateful to the government that bilks the many for the enrichment of the few.

Conservatives rightly think, or once did, that much, indeed most, government spreading of wealth is economically destructive and morally dubious -- destructive because, by directing capital to suboptimum uses, it slows wealth creation; morally dubious because the wealth being spread belongs to those who created it, not government. But if conservatives call all such spreading by government "socialism," that becomes a classification that no longer classifies: It includes almost everything, including the refundable tax credit on which McCain's health care plan depended.

Hyperbole is not harmless; careless language bewitches the speaker's intelligence. And falsely shouting "socialism!" in a crowded theater such as Washington causes an epidemic of yawning. This is the only major industrial society that has never had a large socialist party ideologically, meaning candidly, committed to redistribution of wealth. This is partly because Americans are an aspirational, not an envious people. It is also because the socialism we do have is the surreptitious socialism of the strong, e.g. sugar producers represented by their Washington hirelings.

In America, socialism is un-American. Instead, Americans merely do rent-seeking -- bending government for the benefit of private factions. The difference is in degree, including the degree of candor. The rehabilitation of conservatism cannot begin until conservatives are candid about their complicity in what government has become.

As for the president-elect, he promises to change Washington. He will, by making matters worse. He will intensify rent-seeking by finding new ways -- this will not be easy -- to expand, even more than the current administration has, government's influence on spreading the wealth around.