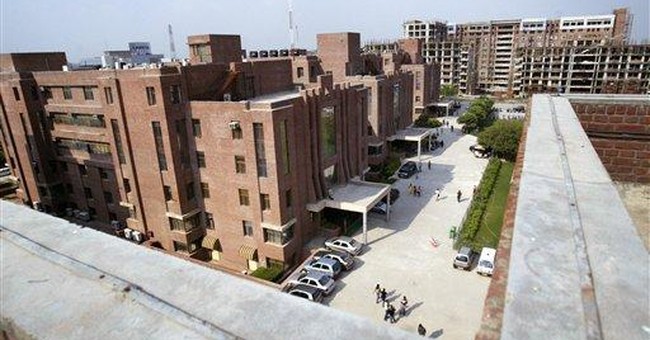 "Because that's where the money is."
-- Willie Sutton, when asked in 1934 why he robbed banks

WASHINGTON -- Washington is having a Willie Sutton Moment. Such moments occur when government, finding its revenue insufficient for its agenda, glimpses some money it does not control but would like to.

Sen. Charles Grassley, R-Iowa, and Rep. Peter Welch, D-Vt., recently convened a discussion of how colleges and universities should be spending their endowments. Grassley, who says more than 135 institutions each have endowments of more than $500 million, says perhaps they should be required to spend 5 percent of their endowments each year. Welch has introduced legislation to require that percentage be spent to reduce tuition and other student expenses.

This government reach for control of private resources comes even though last year colleges and universities spent, on average, 4.6 percent of their endowments. Furthermore, most endowments are too small to be a significant source of captured money.

Last fiscal year, Harvard's endowment, earning an 8.6 percent return, grew from $34.9 billion to $36.9 billion. Although less than the 23 percent return in the previous year, it was an excellent performance, considering the economic turbulence. But only 45 private institutions have endowments of more than $1 billion. Among the other 98 percent (1,565) of institutions, the median endowment is just $14 million. So government in a Willie Sutton mood would target the wealthiest institutions -- those that are the foundation of basic research that undergirds American prosperity, and that have the most generous financial aid programs for students.

Nowadays, much of politics consists of telling voters that the prices of many things they buy -- gasoline, health care, higher education -- are unreasonable. But demand for higher education has not declined even though its price at many institutions has risen even faster than the price of health care. Parents continue to pay rising tuition costs because they consider higher education a reasonable investment. They know that, today, wealth creation is driven by "human capital" -- trained minds -- and that "you earn what you learn."

Daniel Mark Fogel told the Grassley-Welch panel that at the University of Vermont, of which he is president, 60 percent of undergraduates, and 74 percent of this year's freshman class, are from out of the state. They pay the nation's second-highest non-resident tuition, which subsidizes the lower tuition paid by Vermonters, and helps offset declines in state appropriations.

Some Massachusetts state legislators, committing two of the seven deadly sins, are angry because tax revenues do not match their ambitions, and envious of Harvard. They suggest raising more than $1 billion annually with a 2.5 percent assessment on the nine colleges and universities in the state that have endowments of more than $1 billion.

California legislators, disguising a third sin, avarice, as concern for "diversity," want to require large California foundations to report the race, gender and sexual orientation of their trustees, staff and grant recipients. Other state legislatures will emulate this step toward government control of the flow of philanthropy.

-- indeed, almost erased -- the distinction between public and private sectors.

Hundreds of billions of dollars that the political class would have liked to direct for its own social and political purposes have been otherwise allocated. That allocation, by government fiat rather than by market forces, must reduce the efficiency of the nation's stock of capital.

Which in turn will reduce economic growth, and government revenues, just as the welfare state -- primarily pensions and medical care for the elderly -- becomes burdened by the retirement of 78 million baby boomers.

As government searches with increasing desperation for money with which it can work its will, Willie Sutton Moments will multiply. Government has an incentive to weaken the belief that the nation needs a vigorous and clearly demarcated sector of private educational and philanthropic institutions exercising discretion over their own resources.

So the frequently cited $700 billion sum is but a small fraction of the cost, over coming decades, of today's financial crisis. The desire of governments to extend their control over endowments and foundations is a manifestation of the metastasizing statism driven by the crisis. For now, its costs, monetary and moral, are, strictly speaking, incalculable.