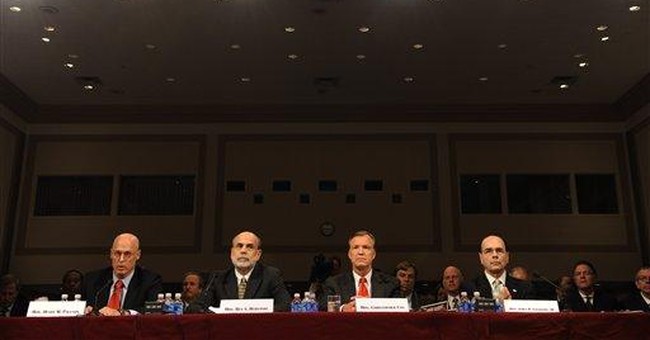 WASHINGTON -- Members of Congress are being exhorted to stampede, like lemmings in reverse, away from a postulated cliff. But some of the economic geographers who say they know that the cliff is there, and that the economy will plunge over it if Congress stops to think before empowering the secretary of the Treasury to control the flow of capital through the veins of American capitalism, are some of those experts who said in March that prophylactic federal intervention in the matter of Bear Stearns was necessary to contain the crisis.

Everything that has been done for the last six months has been done to cope with what previous actions were supposed to prevent. A perhaps pertinent axiom: There is no education in the second kick of a mule.

The essence of this crisis is lack of knowledge, including the inability to know who owes what to whom, and where risk resides. In such a moment, government's speed should not vary inversely with its information. With government's prestige, measured by approval ratings of the president and Congress, at a historic low, government is taking on unprecedented responsibilities. Henry Paulson, aka The Fourth Branch of Government, is intelligent and indefatigable and has as much pertinent experience as could be hoped for. But no one has ever had much experience that is pertinent to the tasks that would be assigned to him by the three-page legislation that would give him almost complete discretion over at least $700 billion.

Before Congress codifies this, it should consult Article I, Section 1 of the Constitution: "All legislative powers herein granted shall be vested in a Congress of the United States, which shall consist of a Senate and House of Representatives." But since the federal government was transformed into a regulatory state in the 20th century, Congress has routinely delegated essentially legislative powers to the executive branch and independent agencies. This is one reason conservatives regret the growth of government: It entails supplanting the rule of law -- laws written by elected representatives -- by the rule of rules written in the executive branch.

Rep. Barney Frank, who chairs the House Financial Services Committee, says: "No one in a democracy, unelected, should have $800 billion to spend as he sees fit. ... That's not the way to run a democracy." Frank is properly punctilious about a fundamental principle of American governance -- legislative control of public funds. But a fundamental principle of American political economy is that no elected person should exercise virtually unfettered discretion with such sums of taxpayers' money.

In 1922, Lenin, attacked from the left because he was allowing some small-scale private enterprise and agriculture, promised that the state would control the Soviet economy's "commanding heights." In 1945, Britain's Labour Party explained its nationalization policies by saying that socialism should include government "control of the commanding heights of the economy."

In 1945 Britain, this meant the stuff of industrialism -- iron, steel, coal, railroads, etc. In 1945, Aneurin Bevan, a leading Labour politician, said: "Britain is an island bedded on coal and surrounded by fish; only an organizing genius could produce a coal shortage and a fish shortage simultaneously." Socialism soon produced that.

Today, the commanding heights of America's economy are financial services, and regarding them the line between the public and private sectors is being blurred to indistinctness. What is the American equivalent of coal and fish? We might find out.

An enormous range of complex judgments will have to be made about who will decide -- and by what criteria -- to whom money will be directed, and how to value and price the financial instruments, and the assets behind them, that the government might soon own. But these micro problems, although quite huge, pale next to the macro problem, which is:

This crisis has arrived during the ninth month of a vast demographic deluge -- the retirement of 78 million baby boomers. As the population ages, the welfare state -- primarily, a transfer-payments pump providing pensions and medical care for the elderly -- requires more rapid economic growth to generate increasing revenues. To the extent that today's crisis results in large amounts of capital being allocated by considerations other than those of economic efficiency, the nation will be consigned to less-than-optimal economic growth.

The next administration, but especially an Obama administration, will chafe under severely narrowed economic restrictions. But subsequent generations will pay the radiating costs of the rising role of the state in allocating financial resources.