From Bank Bailouts to Auto Bailouts? 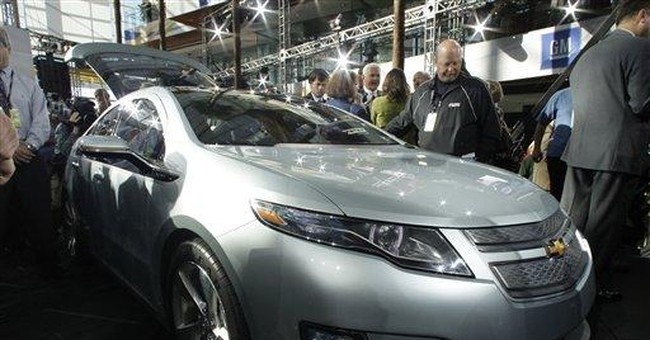 WASHINGTON -- In the 1994 elections, Republicans ended 40 years of Democratic control of the House of Representatives. So in 1995, a vice president of Fannie Mae wrote a letter to Ed Crane, president of the Cato Institute, saying that Fannie Mae intended to give that libertarian, free-market think tank a $100,000 grant.

Politics produced Fannie Mae. It was created by the government in 1938 to further the government objective of increased homeownership. It was sold -- semi-privatized, sort of -- for a political purpose: to help President Lyndon Johnson finance the Vietnam War. Fannie Mae has no objection to interventionist government; the regulatory state created and cosseted it. And it has always known which side its bread is buttered on -- on both sides, by taxpayers, through the implicit federal guarantee of Fannie Mae's obligations.

But in 1995, Fannie Mae, attempting to ingratiate itself with conservatives, approached Cato with cash, thereby proving that it understands libertarianism no better than it understands subprime mortgages. When Crane responded that Cato never accepts government funding, he received a starchy letter from Fannie Mae hotly denying that it was in any way a government entity.

Well. The implicit federal guarantees -- which enabled Fannie Mae and another "government-sponsored entity," Freddie Mac, to swell up with more than 11,000 employees and $5 trillion in mortgages -- have become explicit. Was Fannie Mae cynical or delusional in 1995? As government entanglement with our less-and-less-private enterprise system increases faster than at any time since the 1930s, remember: Good fences make good government -- fences that clearly demarcate the border between the public and private sectors.

The Financial Times, which is not normally droll, recently began a story: "Tim Geithner is without doubt the most active investment banker on Wall Street these days." He is president of the Federal Reserve Bank of New York. The deals that he and other government officials have brokered, with the backing of government money, may be prudentially necessary because failures of certain financial institutions might congeal the flow of credit that must lubricate recovery. What, however, is the excuse for the corporate welfare for GM, Ford and Chrysler?

Ford's assembly plant in Louisville, Ky., is participating in that corporation's struggles. The Toyota plant in Georgetown, Ky., is flourishing as part of the other American auto industry. It is located largely in the South, employs 92,000 Americans and is not in the toils of the cost structure Ford and GM negotiated with the United Auto Workers union. Lemon socialism -- the subsidization of the weak -- is supposedly needed lest a U.S. automaker file for bankruptcy, causing the sort of civil disorder and social chaos that accompanied the disappearance of Studebaker, Packard, American Motors and others.

Detroit is striking for subsidies while the iron is hot -- while the 37 electoral votes of two automaking states, Ohio and Michigan, hang in the balance. Where is the "partisan rancor," which John McCain deplores, now that we really need it? He and Barack Obama agree on the corporate welfare for the three Detroit mendicants. Obama perhaps believes that lemon socialism is better than no socialism at all. McCain, reacting viscerally, sees everything as a moral melodrama; his economic thinking, which really is nothing of the sort, owes more to Moses than to Adam Smith. In McCainism -- the politics of "honor" -- there are no mere mistakes; they must also be dishonorable, because corrupt.

Anyway, taxpayers have been conscripted into subsidizing $25 billion of government loans for Detroit, which says that sum is nice as an appetizer, but hardly a meal. It wants more.

General Motors' full-page newspaper ads brag that it (with the coerced cooperation of taxpayers) is "completely reinventing the automobile." This is no more convincing than GM's broadcast ads that say it is offering customers its employee discount "in celebration of our 100th anniversary." Celebration? Of what? The fact that a company hemorrhaging money must discount its products?

Detroit says, correctly, that some of its problems stem from fuel economy and other mandates imposed by the 535 automotive engineers on Capitol Hill. But that is beside the point, which is: No one thinks that the failure of an auto manufacturer would pose systemic risk to the economy. Americans would just buy a different mix of cars.

In "The Communist Manifesto," Karl Marx marveled that, such is capitalism's dynamism, "all that is solid melts into air." Bear Stearns, Lehman Brothers and Merrill Lynch should not be the last to learn the truth of that.

(Disclosure: Mari Will is a consultant for the Japan Automobile Manufacturers Association.)

Dozens of Democrats Are Worried About Biden Having Singular Authority to Order Use of Nuclear Weapons
Townhall
'PROVE US WRONG'! Steven Crowder calls down the THUNDER on Jack and Twitter for locking him over his ‘v*ter fr**d’ video
Twitchy
One Week on, Some Hints Have Emerged About the Future of Rush Limbaugh's Show
Redstate
Tucker Carlson's 'Disinformation' Monologue Triggers the Left Big Time – Now Watch Them Fall Into His Trap and Respond With Disinformation
PJ Media