The Need for Cuban Liberalization 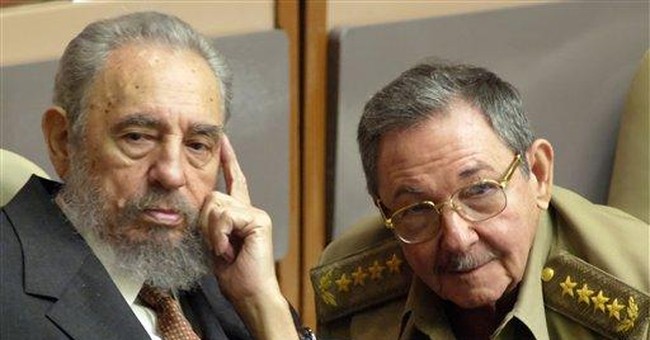 WASHINGTON -- On Dec. 29, 1962, 11 months before he was murdered by an advocate for Fidel Castro's regime (Lee Harvey Oswald had distributed propaganda on a New Orleans street for the Fair Play for Cuba Committee), President John Kennedy, speaking in Miami's Orange Bowl to veterans of the Bay of Pigs fiasco, received from them a Cuban flag and vowed, "I can assure you that this flag will be returned to this brigade in a free Havana." In Cuba, too, regime change has turned out to be more problematic than American policymakers imagined.

Even after the Bay of Pigs -- arguably the most feckless use of U.S. power ever -- Cuba unhinged some American officials. In his biography of Robert Kennedy, Newsweek's Evan Thomas reports that one high-ranking CIA operative had a plan "to surface an American submarine just over the Havana horizon to fire star shells into the night sky, in the hopes of convincing the Cubans that the Second Coming was imminent, thus spurring them to get rid of the anti-Christ -- Castro." Skeptics called this "elimination by illumination."

The question of what should be done now begins with the matter of the U.S. trade embargo. Cuban-Americans demanded its imposition in 1961, applauded its strengthening in 1996 and largely favor its continuation. Changing it would be politically problematic. The Cuban-American vote can be decisive in Florida, whose 27 electoral votes are 10 percent of the 270 needed to win the presidency. Add the 15 electoral votes of New Jersey, another state with a large Cuban-American community, and 16 percent of the 270 can turn on policy toward Cuba.

The embargo was imposed when Cuba was a salient of Soviet values and interests in this hemisphere. Today, Cuba is a sad, threadbare geopolitical irrelevancy. Far from threatening Castro's regime, the embargo has enabled Castro to exploit Cubans' debilitating mentality of taking comfort from victimhood -- the habit, more than a century old, of blaming problems on others, first on Spain and then on the United States.

Those facts do not, however, by themselves make the case for ending the embargo without some reciprocal liberalization by (the other) Castro's regime. Granted, it is arguable that the embargo should be abandoned, or significantly eased, regardless of how the Cuban regime behaves, because the regime has much to fear from any increased permeation of Cuba by foreign commercial and intellectual presences.

U.S. policy toward Cuba should, however, be conditioned, and perhaps haunted, by U.S. policy toward China. That policy was supposed to result in steady, slow-motion regime change through candid subversion in broad daylight. The premise has been that the cure for communism is commerce with the capitalist world. The assumption is that capitalism brings, because it requires, an ethic of trust and the rule of law in the form of promise-keeping (contracts). Also, the protection of private property gives individuals a sphere of sovereignty and whets their appetites for a politics of popular sovereignty.

This has been called "the Starbucks fallacy" (see James Mann's book "The China Fantasy"): When people become accustomed to many choices of coffee, they will demand many political choices. This doctrine may be being refuted by the emergence of a China that has become wealthier without becoming less authoritarian.

Cuba has negligible democratic traditions, and no living experience with a culture of pluralism and persuasion. In Iraq, Russia and elsewhere, we have seen how decades of tyranny degrade a public's capacity for a democratic culture. We also have tested, and found questionable, the proposition that democratic institutions can precede and create such a culture.

The embargo is being partially vitiated by dollars -- about a billion of them, equivalent to about 2 percent of Cuba's GDP -- sent to Cuba by the Cuban diaspora, 1.5 million strong. That diaspora supports the embargo, but dollar remittances from abroad can be spent only in government stores, so they accrue to the benefit of the regime.

Castro, whose personal worth is estimated at nearly $1 billion, has sternly -- and proudly -- told Cubans, whose average annual income is less than $200, "We're not a consumer society." That is not news where shampoo is scarce.

Six years ago, Castro's regime gathered 8 million signatures from among the 11 million captive Cubans for a petition -- was that necessary? -- to amend Cuba's constitution (is it necessary?) to declare communism "irrevocable." Let us now praise the much misunderstood Viking King Canute, who commanded the tide to recede in order to demonstrate that it would not obey.