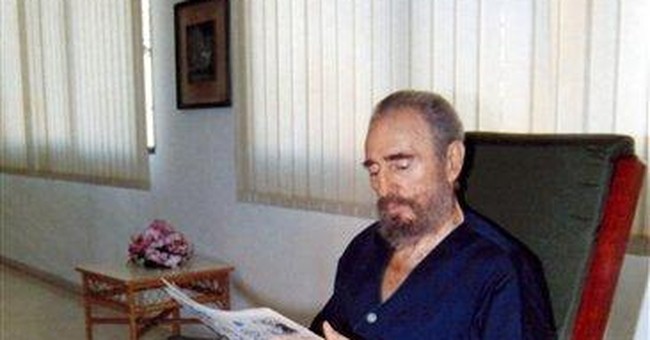 WASHINGTON -- The letter from a 12-year-old to "my good friend Roosvelt" is dated Nov. 6, 1940, one day after FDR won a third term. Saying he is "very happy" FDR won, he adds: "If you like, give me a ten dollars bill green american." The letter, an enlarged copy of which is on display in the National Archives, ends: "Good by. Your friend, Fidel Castro."

Young Castro with his hand out prefigured his role in political history. Until its spell was broken, Marxism mesmerized millions by promising to solve mankind's economic problem -- abundance without the alienation caused by work, the French word for which is travail. Instead, Castro created mendicant Marxism, making Cuba dependent on huge subventions from the Soviet Union, which paid eight times the market price for sugar, and in the process purchased young Cuban men to fight in various "wars of liberation." When Russia withdrew its aid, Cuba's economy quickly shrank 35 percent, more than the U.S. economy contracted (26.5 percent) in the Depression. Cuba under communism had to import sugar. Today, Hugo Chavez's Venezuela provides $4 billion of oil to a Cuba with a GDP of $45 billion.

The departure, if such it really is, of Castro, the weird uncle in the island's attic, cures nothing. Cuba's affliction remains: It is Castroism, which is communism colored by Bonapartism. Communism of any stripe is afflicted by terminal ignorance. Having no market, which is an information-generating mechanism, communism cannot know what things should cost.

Hence communism's amazing contribution to humanity's economic history is "value-subtraction" -- products worth less than the materials that go into them. That result is seriously inconvenient for Marxism's labor theory of value -- the theory that labor adds all value to the world's materials.

Castro's career, although calamitous for Cubans, has provided entertaining farce through its effect on Western political pilgrims seeking leftist saviors. Joseph Goebbels called the Nazi regime "ennobled democracy," the Dominican dictator Rafael Trujillo called his "neo-democracy." In 1960, the second of Castro's 49 years as warden of Cuba as prison, Jean-Paul Sartre, existentialist and Stalinist, published an enraptured book about Castro's democracy. Sartre marveled at what he called Castro's "direct democracy" as demonstrated when, at a roadside stand, Castro and Sartre were served warm lemonade.

Castro got hot. The tepid drink, he said, "reveals a lack of revolutionary consciousness." The waitress, Sartre reported, shrugged and said the refrigerator was broken. Castro "growled" (Sartre's approving description), "Tell your people in charge that if they don't take care of their problems, they will have problems with me." Sartre, deeply stirred, wrote:

"This was the first time I understood -- still quite vaguely -- what I called 'direct democracy.' Between the waitress and Castro, an immediate secret understanding was established. She let it be seen by her tone, her smiles, by a shrug of her shoulders, that she was without illusion."

Norman Mailer, the novelist, and Oliver Stone, embodiment of Hollywood progressives in heat, had illusions galore. In 1960, when Castro came to Manhattan, Mailer, banal even when in ecstasy, wrote of white horses: "One felt life in one's cold overargued blood. ... It was as if the ghost of Cortes had appeared in our century riding Zapata's white horse." Just a few years ago, Stone, a slow learner, advised: "We should look to (Castro) as one of the Earth's wisest people."

In the wise man's prisons -- according to Armando Valladares' memoir of 22 years in them ("Against All Hope") -- some doors are welded shut and prisoners are fed watery soup sometimes laced with glass, or dead rats, or half a cow's intestine, rectum included, containing feces. In 2003, the wise man's pulverizing police state, always struggling to reduce Cuba's civil society to a dust of individuals, sentenced 78 democracy advocates, after one-day secret trials, to sentences of up to 28 years in those prisons. Pilgrims praising Cuban health care call to mind Pat Moynihan's acerbic observation that when travel to China was liberalized, many visitors seemed more impressed by the absence of flies than by the absence of freedom.

Castro has ruled Cuba during 10 U.S. presidencies and longer than the Soviet Union ruled Eastern Europe. The Economist has called him "a Caribbean King Lear." Raging on his island heath, with nothing to celebrate except his endurance, his creativity has come down to this: He has added a category to the taxonomy of world regimes -- government by costume party. Useful at last, the Comandante, dressed for success in his military fatigues, presides over a museum of Marxism.