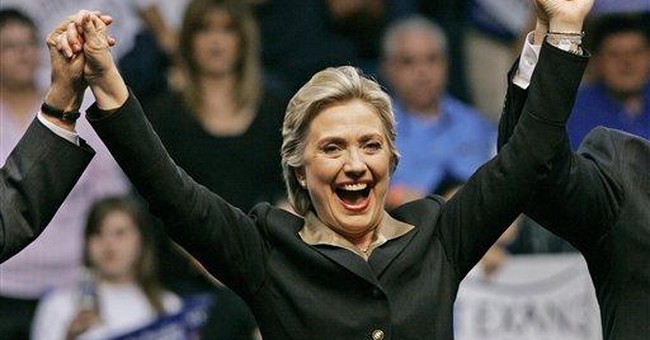 WASHINGTON -- Judging from complaints by her minions, Hillary Clinton considers it unfair that Barack Obama has been wafted close to the pinnacle of politics by an updraft from the continentwide swoon of millions of Democrats and much of the media brought on by his Delphic utterances such as "We are the change." But disquisitions on fairness are unpersuasive coming from someone from Illinois or Arkansas whose marriage enabled her to treat New York as her home, and the Senate as an entry-level electoral office (only 12 of today's senators have been elected to no other office) and a steppingstone to the presidency.

The four-letter F word that is central to Democrats' rhetoric and to discord everywhere -- "fair" -- is being bandied about. Clinton would be ahead in the delegate count if Obama had not won about twice as many delegates as she in caucuses, so Clinton implies that it is not quite fair to consider delegates accumulated in caucuses as significant as those won in primaries. Obama says it would not be fair for "superdelegates," or delegates chosen by Michigan's and Florida's renegade primaries, to decide the nomination.

Clinton has a small piece of a point, but misses the important point. Caucuses are, indeed, less purely "democratic" than primaries. That is their virtue. They are inconvenient, requiring commitments of time and energy that are more apt to be made by especially interested voters. Thus caucuses filter out, disproportionately, the lightly committed and least informed, which is not cause for dismay.

Popular sovereignty is simple in theory -- government by consent of the governed -- but should not be simple-minded in practice. It need not mean government by adding machine, the mere adding up of numbers. A wise polity also has mechanisms for measuring, accommodating and even rewarding intensity. The Senate does this with the filibuster, which enables an intense minority to slow or stymie a majority, at least for a while.

Caucuses are apt to have (in the jargon of liberal jurisprudence) a "disparate impact": Some kinds or classes of people will be more inclined than others to want to, or be able to, participate. Caucuses might, therefore, skew participation patterns toward the more leisured, affluent and educated -- disproportionately Obama voters. That probably troubles the easily troubled consciences of liberals for whom equality is the sovereign good. One solution is for them to salve their consciences by demoting equality.

The Democrats' ultimate nightmare is that the delegate selection process ends in a virtual tie after Clinton has regained momentum in, say, two of the last three large primaries -- Texas and Ohio (March 4) then Pennsylvania (April 22). Speaker Nancy Pelosi is surely right that delegates selected in defiance of party rules -- Michigan's and Florida's -- should not be dispositive. So superdelegates -- party dignitaries, most of them elected officials -- would have to be. What ethic should guide their decisions? Should each of them vote as did their state or congressional district? Or for the candidate who won the most votes nationally? Or should they think like Edmund Burke?

On Nov. 3, 1774, Burke, an intellectual founder of modern conservatism, delivered a thank-you address to people who, upon hearing it, perhaps wished they had not done what he was thanking them for. They had elected him to represent them in the House of Commons. He told them he was duty-bound to represent the national interest, as he understood that. He said he owed them not obedience but his independent judgment of the public good -- independent of "local prejudices" or "local purposes."

Burkean superdelegates among the Democrats? What fun.

Nothing, however, will assuage Clinton supporters' sense of injustice if the upstart Obama supplants her. Their, and her, sense of entitlement is encapsulated in her constant invocations of her "35 years" of "experience." Well.

She is 60. She left Yale Law School at age 25. Evidently she considers everything she has done since school, from her years at Little Rock's Rose law firm to her good fortune with cattle futures, as presidentially relevant experience.

The president who came to office with the most glittering array of experiences had served 10 years in the House of Representatives, then became minister to Russia, then served 10 years in the Senate, then four years as secretary of state (during a war that enlarged the nation by 33 percent), then was minister to Britain. Then, in 1856, James Buchanan was elected president and in just one term secured a strong claim to the rank as America's worst president. Abraham Lincoln, the inexperienced former one-term congressman, had an easy act to follow.